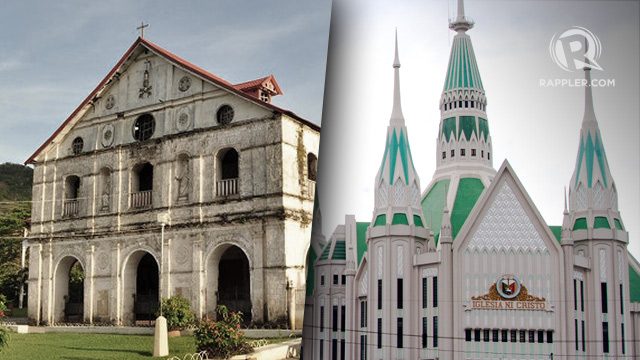 Facebook Twitter Copy URL
Copied
While both claim to be of divine origin, the former traces its authority to St Peter and the succession of popes, while the latter, from the late Felix Manalo, its founder

MANILA, Philippines – About 2,000 years separate the Roman Catholic Church and the homegrown Iglesia ni Cristo. While both claim to be of divine origin, the former traces its authority to St Peter and the succession of popes, while the latter, from the late Felix Manalo, its founder.

A wide gap of doctrinal differences also separates the two faiths, and in the Philippines, leaders of the Catholic Church and the INC do not see eye to eye – even politically.

Sometimes, they even find themselves on opposite sides of the political fence, obtaining mixed results in the process.

How different is the Catholic Church from the INC, and vice-versa?

In anticipation of the 100th anniversary of the INC, Cotabato Archbishop Orlando Cardinal Quevedo prepared a primer to act as a catechesis guide for Filipino Catholics. Quevedo, a Canon law expert and a Church scholar, stressed that differences in religious belief should not hinder unity and harmony.

“The respect we give to the religious belief of others should motivate us to get to understand those deep beliefs, as this is demanded by the requirements of sincere dialogue. Differences in what we believe do not make us distant from those who hold those beliefs…among ideas contradictions are inevitable, but not among persons,” Quevedo said in the foreword.

Rappler summarizes the main points in the primer.

1) The divinity and humanity of Christ. To the Catholic Church, Jesus Christ “is the Son of God” and the “Second Person of the Blessed Trinity.” He is the central figure in the apostolic teaching. For the INC however, Christ “remains man in His state of being. Christ is never the true God. He is a true man.” That Christ “was subjected to the experiences and circumstances of human life” is proof that Christ was never God.

2) Central teaching about God. To the Catholic Church, the Trinitarian Faith guides its belief in the oneness of God. That there are 3 Persons in God: the Father, the Son and the Holy Spirit, that “equally possess the fullness of the one and indivisible human nature. This mystery of the Most Blessed Trinity forms the central mystery of the Christian faith and life.”

To the INC, however, “there is only one God. He alone is God (Ps. 86:10).” Another Bible verse says “For I am God and there is no other.” As such, “the INC interprets these as proofs against the Trinity of Persons in one God.”

3) Sources of divine revelation. For the Catholic Church, there are two: Apostolic tradition and the Holy Bible. Apostolic tradition “is the transmission of the message of Christ brought about from the very beginnings of Christianity by means of preaching, bearing witness, institution, worship and inspired writings.” It occurs in two ways: through living transmission of the Word of God and through Sacred Scripture.

To the INC, however, only the Bible is the source of divine revelation. “They believe that the words of God are written in the Bible; that when the Bible speaks, God himself speaks. So when the Bible is silent, the INC is silent too, for it recognizes no other basis and authority in serving God except the Bible.”

4) What’s in a  name? The Roman Catholic Church began to be called as such in the 4th century. St Ignatius, the bishop of Antioch and a disciple of St John, is credited for it when he said, “Where there is Christ Jesus, there is the Catholic Church.” The word “Catholic” is from the Greek word katholikos, which means universal.

The INC, using the *Lamsa version of the Bible, took its cue from various verses in the Holy Book, where the Church that Christ built is called the Church of Christ, or Iglesia ni Cristo in Filipino. To them, the INC is the only true Church.

(*George Lamsa authored “The Holy Bible from ancient Eastern Manuscripts.” He based his translation on Aramaic, not Greek. The Lamsa version is also accepted by the Jehovah’s Witnesses and the Christadelphians. Apart from the Lamsa version, the INC also adheres to James Moffat’s version of the Bible. It is the Moffat version that INC founder Felix Manalo “used as source of the identity of God’s last messenger. “From the Far East will I bring your offspring.”)

5) Path to salvation. The INC adheres to the exclusivist doctrine that outside of it, there is no salvation. “To be reconciled and to be saved, one must become a member. Unless he becomes a part of the Church of Christ or the Body of Christ, he is not embraced by the redemptive death of Christ.”

In comparison, the Catholic Church teaches that eternal salvation is also granted to “those who, through no fault of their own, do not know the Gospel of Christ or His Church, but who nevertheless seek God with a sincere heart and, moved by grace, try in their actions to do His will as they know it, through the dictates of their conscience (from the encyclical Lumen Gentium).”

6) Apostate Church. The INC accuses the Catholic Church of “unfaithfulness” or apostasy. Citing the prophesy of Apostle Paul, the early Church strayed away from the teachings of Christ. They cite the words of St Paul, who said that after his death, “men will arise who will speak perverse things to draw away the disciples of Christ after them (Acts 20:30).” The INC also cites St Peter, who said that false prophets will preach heresies “denying the Master, the Lord Jesus Christ, by rejecting him as Head of the Church…and by rejecting His name.”

The Catholic Church however, counters that it “has been faithful at all times to the Revelation” amid erroneous teachings and persecutions. The martyrdom of early Christians in the first 3 centuries is proof of the fidelity of the Catholic Church to Christ’s teachings.

In the first place, if the Catholic Church committed apostasy, “why does the INC use the Holy Bible that was ratified by the same Church in the 4th century?”

7) Heretical Church. For the Catholic Church, the teachings of the INC “are a mere repetition of the ‘heresies’ of the early centuries of Christianity, in particular, Monarchianism (from the Greek word, monarch, which means principle/source) of the 2nd century.” Monarchianism taught that God “is only God the Father, thus it denied the Trinity, the eternity of the Logos (The Word, the Second Person), and reduced the Holy Spirit to a mere force of God, the Father.”

8) Prophecy. The INC believes that founder Manalo was the Last Messenger of God as prophesied in the Bible. Isaiah 46:11 said: Calling a bird of prey from the east, the man of my counsel from a far country. I have spoken and I will bring it to pass; I have purposed and I will do it.”

The INC considers Manalo “as the bird of prey because the sons and daughters of God from the Far East are being hindered by the north and the south (the north representing Protestantism and the south, Catholicism) and the messenger of God has to bring them out of these 2 religions (Is. 43:6)

Manalo also supposedly fulfilled the prophecy in Revelation 7:2-3: “Then I saw another angel rising where the sun rises, carrying the seal of the living God.” – Rappler.com