Aquino’s SONA speeches through the years 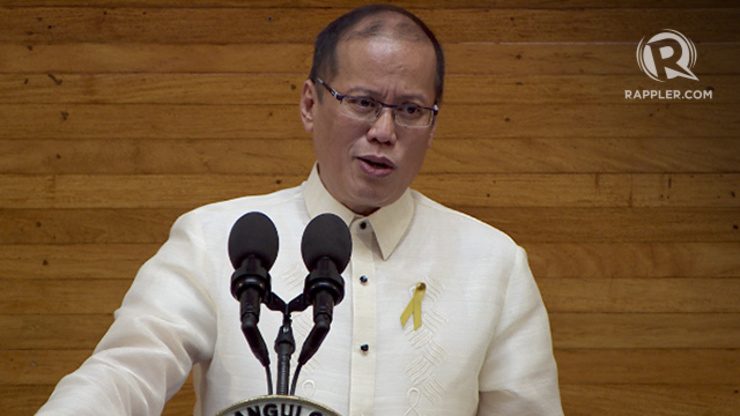 MANILA, Philippines – President Benigno Aquino delivered on Monday, July 28, his 5th State of the Nation Address – the second to the last of this kind that he will deliver before his term ends in 2016.

Unlike in past speeches when Aquino always found ways to hit and expose questionable deals under the Arroyo administration, this time, he took a swipe at his detractors. It was a speech delivered right the Supreme Court struck down parts of the controversial Disbursement Acceleration Fund (DAP), and after he earned his lowest approval ratings based on public opinion surveys. (READ: Aquino appeals to supporters, belittles critics)

There are distinct similarities across his previous SONAs – among them, a continued failure to mention the importance of passing the Freedom of Information (FOI) bill despite a clamor from civil society organizations.

A review of all the SONAs delivered by Aquino yields the following highlights:

For his first SONA, Aquino focused on exposing irregularities allegedly committed by the previous administration. He claimed that some government agencies were overflowing with funds, while the whole nation suffered from a limited budget.

He specified the Metropolitan Waterworks and Sewerage System, saying that agency officials and some employees were earning huge amounts of salaries and allowances. Even the MWSS Board of Trustees, he said, was also receiving huge amounts in salaries and multiple benefits.

He also mentioned the creation of a Truth Commission, supposed to be headed by former Supreme Court Chief Justice Hilario Davide. It was envisioned to investigate the alleged corruption under the Arroyo administration. Aquino said he was about to sign the week of his SONA an Executive Order creating the Truth Commission.

Aquino began his second SONA by highlighting his campaign to fight the “utak wang-wang” mentality in the government, which is characterized by abuse among corrupt officials.

He announced in his speech the appointment of former Supreme Court Justice Conchita Carpio-Morales as the new Ombudsman, to replace former Ombudsman Merceditas Gutierrez who resigned in May 2011 before she was expected to face an impeachment trial at the Senate.

Just like in his previous SONA, Aquino continued to expose corrupt practices under the Arroyo administration. One of these was the billion-peso budget for coffee alone by the past management of the Philippine Amusement and Gaming Corporation (PAGCOR).

Aquino also reacted to the tension between the Philippines and China over the West Philippine Sea, and expressed interest in bringing the dispute to the United Nations (UN) International Tribunal for the Law of the Sea.

Aquino boasted about economic gains under his leadership. He claimed these gains were the result of government reforms that included cutting wasteful spending and making corrupt officials accountable for their acts.

One of the most applauded parts of his speech was when he referred to “responsible parenthood” as a solution to backlogs in education. Though Aquino did not specifically mention the controversial reproductive bill (RH), his speech was regarded as an indirect approval and endorsement of the measure.

He also urged Congress to approve the sin tax bill, which was eyed to generate P32 billion in revenues annually from cigarettes and alcohol. At the time, the House of Representatives had already passed the bill on final reading.

Aquino shifted his administration’s focus from anti-corruption to “inclusive growth” in his SONA, and vowed that his government would continue focusing on improving the lives of the poor.

Aquino discussed in his SONA the status of the distribution of Hacienda Luisita – a “favorite topic” of his critics. He said the distribution of titles to qualified farmer beneficiaries was supposed to be completed by September 2013, as reported by Department of Agrarian Reform (DAR) Secretary Gil Delos Reyes.

He also singled out government officials for alleged incompetence and corruption, and criticized the performance of the Bureau of Immigration (BI), National Irrigation Administration (NIA), and Bureau of Customs (BOC).

Under fire over recent controversies, particularly due to his defense of the hotly-debated Disbursement Acceleration Program (DAP), an emotional Aquino appealed to supporters, hit back at his critics, and reminded the public to choose somebody who will continue his reforms after his term ends in 2016.

Aquino apologized for delays in the relocation program for people displaced during the siege of Zamboanga City in September 2013, and lauded government response during the onslaught and in the aftermath of, Super Typhoon Yolanda. He also confirmed he had approved rehabilitation plans for affected local government units – close to 8 months after the super typhoon.

Aquino also boasted that his administration had awarded 7 public-private partnership projects (PPPs), more than the number of projects implemented by the previous administrations. – Rappler.com

*Videos from the Youtube channels of RTV-Malacañang and PCOO. Data on length of speeches and rounds of applause are based on various news reports.