Aug 25, 2014 7:09 PM PHT
Reynaldo Santos Jr
Facebook Twitter Copy URL
Copied
Not all those who join the video challenge know what ALS is, or what the video is all about. Here are some facts you need to know about the disease and the ice bucket challenge. 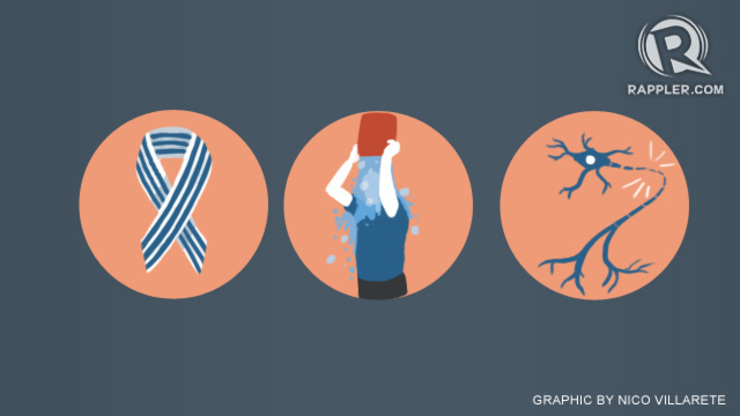 These viral videos are the latest craze on the Internet. The New York Times reported that more than 1.2 million videos were shared on Facebook between June 1 and August 13, and that the challenge was mentioned on Twitter more than 2.2 million times since July 29 this year.

These viral videos try to raise awareness about a disease called ALS. And it helped that even big personalities have taken part in not just making the disease known, but also donating for this cause. (READ: Zuckerberg, Timberlake, Fallon take on ice bucket challenge)

Not all those who have joined the video challenge actually know what ALS is, or what the video is all about.

Here are some facts you need to know about the disease and the ice bucket challenge.

What does ALS mean?

ALS stands for Amyotrophic lateral sclerosis, a disease that affects nerve cells in the brain and the spinal cord. A-myo-trophic is from the Greek language that means “no muscle nourishment” — “A” means no or negative, “myo” means muscle, and “trophic” means nourishment. “Lateral” refers to the areas in the spinal cord where portions of the nerve cells that signal and control the muscles are located. As the lateral degenerates, it leads to scarring or hardening (or sclerosis) in the affected part.

What does ALS do to the body?

What are the symptoms of ALS?

To be diagnosed with ALS, patients must have signs and symptoms of both upper and lower motor neuron damage.

Body parts affected by early ALS symptoms depend on which motor neurons in the body are damaged first. About 75% of patients first experience “limb onset” – symptoms in the arms (difficulty in arm activities such as writing) or legs (awkwardness when walking or running, tripping or stumbling, etc) – while about 25% experience “bulbar onset” (difficulty in speaking clearly or swallowing.)

In later stages, lung and eye functions may be affected. Most people with ALS die from respiratory failure, usually within 3 to 5 years from the onset of symptoms. However, about 10% of those with ALS survive for 10 or more years.

The cause of ALS is not yet completely known. But scientific researches have found that ALS may have some genetic links.

In 1993, scientists discovered that mutations in the gene that produce SOD1 enzyme are associated with some cases of ALS. Also, in 2011, scientists found that a defect in the C9orf72 gene is present in both ALS and frontotemporal dementia (FTD) patients, revealing that these disorders may be related.

In 90 to 95 percent of all ALS cases, the disease occurs randomly, with no clear factor or cause.

Environmental factors such as exposure to toxic or infectious agents, physical trauma, and behavioral and occupational factors are also being studied to see whether they also cause ALS.

ALS is considered to be one of the most common neuromuscular diseases worldwide. In 90 to 95% of all ALS cases, the disease occurs randomly, with no clear factor or cause.

In the US, there are 3.9 cases per 100,000 persons. ALS is said to be more common among white males, non-Hispanics, and persons aged 60–69 years, but younger and older people can also develop the disease.

About 5 to 10% of all ALS cases are inherited. (READ: ALS: The silently slow killer)

How is ALS treated?

There is no cure yet for ALS. But in 1995, the US Food and Drug Administration (FDA) approved the use of riluzole, which is believed to reduce damage to motor neurons. This drug prolongs survival by several months, but does not repair already-damaged motor neurons.

Also, physical therapy and special equipment can enhance an individual’s independence and safety throughout the course of ALS.

What is the ALS Ice Bucket Challenge?

Participants who accept the challenge (mostly those who’ve been tagged or mentioned by challengers) have to record a video of themselves pouring ice-cold water on their head. They have to state that they choose to participate to raise awareness of ALS, and that they have to accomplish it within 24 hours after they are identified by a challenger.

Those who are challenged but choose not to accept it will have to donate $100 to an ALS association of his or her choice. However, most of those who accepted the challenge, particularly big personalities, still pledged to donate.

How did the Ice Bucket Challenge begin?

The idea of dousing cold water on one’s head to raise money has early origins, and they are not exclusive to ALS awareness.

The exact date of its origin is unclear. A Slate report says that a search of the hashtag #icebucketchallenge on Instagram indicates that video challenges began as early as 2013, with most of them being done just for fun.

But the ALS reference in ice bucket challenge videos reportedly began in a video posted on July 15, 2014 by golfer Chris Kennedy. He tagged and challenged his cousin in New York, whose husband has had ALS for 11 years.

The feeling of ice-cold water over the body is said to be similar to the numbing effect of ALS.

Since then, the video challenge has spread on the Internet.

How much has been raised?

The ALS Association in the US has reportedly received $41.8 million in donations between July 29 and August 21, 2014. This is a big jump compared to just $2.1 million received during the same time period last year.

The ALS Therapy Development Institute, also in the US, has reported a big jump in the amount of donations it has received after the viral video challenge.

Critics, however, point out that most participants focus mainly on the fun act of doing the challenge rather than actually donating or raising awareness of ALS. (READ: Why I refuse to join the ALS Ice Bucket Challenge). – Rappler.com