Nov 1, 2014 9:00 AM PHT
Reynaldo Santos Jr
Facebook Twitter Copy URL
Copied
Targets have been met and missed; promises, failed and fulfilled. We look back at a year of rehabilitation and rebuilding efforts after Super Typhoon Yolanda (Haiyan). 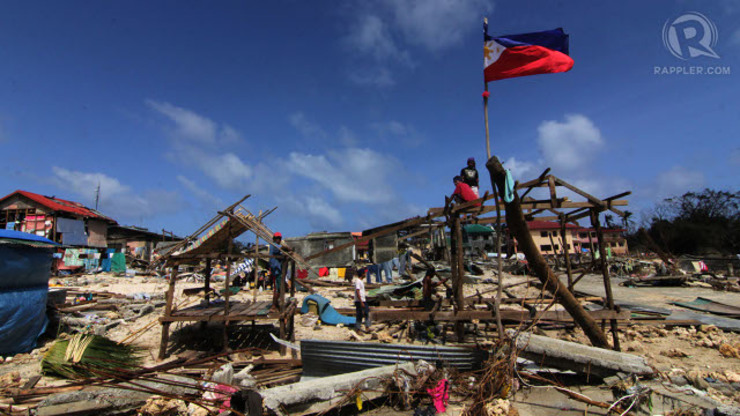 MANILA, Philippines – By Saturday, November 8, it will be exactly a year since central Philippines was hit by Super Typhoon Yolanda (international codename Haiyan), now considered as one of the most catastrophic cyclones in the world.

Yolanda left a huge number of casualties and overwhelming destruction that has taken the government some time to address. (READ:TIMELINE: Super Typhoon Yolanda)

People’s food, safety, education, jobs; power supply, clean water, health services; decent and permanent housing; roads, bridges, airport; investments – name it, and for sure, government and civil society had set targets that were either met or missed, or had made promises, either failed or fulfilled.

How exactly have the needs and issues – past the stage of relief and rescue – been addressed? Where are we on efforts toward rehabilitation and rebuilding? Here’s a review of all the events in the past year. Click on the dates below to see what happened each month in 2013 all the way to October 2014.

November 13, Wednesday
The National Grid Corporation of the Philippines (NGCP) says it will take them up to 6 weeks to restore power in areas badly hit by the storm – “assuming nothing else happens.”

Secretary to the Cabinet Rene Almendras acknowledges the difficulties the national government is facing – even admitting it needs help – but still defends its efforts.

November 14, Thursday
A US Navy group, led by the aircraft carrier USS George Washington, arrives in the Philippines to take part in relief efforts.

November 16, Saturday
The government begins transporting some displaced people from the islands of Samar and Leyte to Manila on board the government’s C-130s.

November 17, Sunday
President Benigno Aquino III arrives in Guiuan, Eastern Samar, where Yolanda first made landfall. He praised its local executives while taking potshots at other local government officials whom he refuses to name.

Romualdez takes a swipe at Aquino for putting the blame on local governments that supposedly failed to prepare for Yolanda.

November 20, Saturday
In a press conference, Interior and Local Government Secretary Manuel Roxas II says he’s not the ground commander in Tacloban, and that no one actually is.

It is revealed that despite the troops on the ground retrieving hundreds of bodies, the National Disaster Risk Reduction and Management Council (NDRRMC) has been slow to update its casualty tally.

November 21, Sunday
To help rebuild the lives of the poorest survivors, the government says it will hand them money through a cash transfer program without conditions.

November 26, Tuesday
NDRRMC executive director Eduardo del Rosario says the Department of Public Works and Highway (DPWH) has built 116 bunkhouses in 3 provinces in Eastern Visayas. One bunkhouse can house 24 families that will share a toilet and a kitchen.

November 27, Wednesday
The Philippine Long Distance Telephone Company (PLDT) group and Globe Telecom Incorporated announce they will need until the end of the year to complete the restoration of services in affected provinces.

November 29, Friday
Aquino reportedly meets with former Senator Panfilo “Ping” Lacson in his private office. Lacson is reportedly Aquino’s choice to be the “czar” of the government’s rehabilitation and reconstruction program.

December 1, Sunday
The US pulls out of the Visayas its 12,000 troops, Ospreys, C130s, and ships after providing critical assistance to the Yolanda-devastated provinces for 3 weeks.

December 2, Monday
In a media forum, Lacson says he has accepted a presidential offer to oversee the government’s massive and costly post-Yolanda rehabilitation program, and that he hopes to accomplish the job by June 2016.

In a briefing, Petilla says less than 50% of the damaged transmission and distribution facilities have been repaired in devastated Visayas, but they are not sure if they can restore 100% of the energy by Christmas.

December 3, Tuesday
The House of Representatives approves on 3rd and final reading the P14.6-billion supplemental budget for the executive’s disaster fund.

Seventy-two percent of the power load in the Visayas has been restored, according to NGCP.

December 4, Wednesday
Senate approves on 3rd and final reading its version of the P14.6-billion supplemental budget for disaster rehabilitation and reconstruction programs.

The Palace disagrees with the opinion that the handling of Yolanda will dictate how Aquino’s presidency will be remembered, and again defends the administration’s recovery and relief efforts.

December 5, Thursday
NDRRMC’s Del Rosario tells reporters that he will resign if someone can prove that the number of typhoon casualties is underreported.

Globe Telecom and Smart Communications announce the restoration of at least 90% of both their networks in the Visayas.

December 6, Friday
In a statement, Asian Development Bank (ADB) president Takehiko Nakao says that its board approved a $500-million emergency loan to help fund the rehabilitation of Yolanda-affected areas.

December 11, Wednesday
DILG’s Roxas hits back at Romualdez for releasing an “edited” video of a meeting held in the aftermath of Yolanda. In the video, released a day after a tearful Romualdez spoke to media, Roxas supposedly tells Romualdez: “You have to remember, we have to be careful. You are a Romualdez and the President is an Aquino.”

December 15, Sunday
In a radio interview, Lacson reveals receiving reports that “unscrupulous lower-ranking officials” have begun to take advantage of the daunting task ahead.

December 17, Tuesday
Lacson says the government is looking at P130 billion to fund rehabilitation efforts for Yolanda-affected areas, but he thinks the amount is not enough.

December 18, Wednesday
The government releases its rehabilitation plan, and states that the reconstruction effort will cost around P360.9 billion ($8.17 billion) in a span of 4 years.

December 21, Saturday
United Nations (UN) Secretary General Ban Ki-moon says they are trying to “mobilize at least US$800 million” (about P33.6 billion) in funds over 12 months to help the Philippines in its efforts to recover from the super typhoon.

December 25, Wednesday
In his first Christmas message, Pope Francis leads the world in praying for the Philippines after Yolanda.

December 26, Thursday
The President signs the P14.6-billion supplemental budget for 2014 for disaster rehabilitation and reconstruction programs.

January 6, Monday
Lacson says he has been “quietly investigating” since December the report that a local politician is working on getting kickbacks of a third of the cost of bunkhouses for affected residents.

Public Works Secretary Rogelio Singson announces he will submit his resignation if the bunkhouses are proven to be overpriced.

January 8, Wednesday
Singson admitts he was initially clueless about a key international benchmark for building shelters for typhoon survivors.

January 17, Friday
The Philippines’ Foreign Aid Transparency Hub (FAITH) reports that the country has received just less than a quarter of the cash that at least 58 countries and groups promised.

January 23, Thursday
Lacson announces that 9 giant companies have promised to lead rehabilitation in most of the areas damaged by Super Typhoon Yolanda.

February 4, Tuesday
Department of Social Welfare and Development (DSWD) Secretary Corazon Juliano-Soliman and UNICEF Representative to the Philippines Angela Kearney sign a Memorandum of Understanding (MOU) for the implementation of the program that will give P4,370 (US$100) every month for a period of 6 months to 10,000 vulnerable households from Tacloban City and municipalities in upland areas.

February 6, Thursday
DPWH’s Singson says contractors who built substandard bunkhouses for Yolanda survivors begged the government to let them off the hook.

Senators Franklin Drilon and Ferdinand Marcos Jr rebut each other about the lack of assistance from the United Nations (UN) in building permanent shelters for Yolanda survivors.

February 8, Saturday
Exactly 3 months after the typhoon, the Department of Tourism (DOT) launches #PHthankyou, a campaign thanking the rest of the world for helping rebuild heavily-damaged areas in the Visayas. Billboards for these were lit in key cities around the world.

February 15, Saturday
The UN warns that millions of Yolanda survivors are still without adequate shelter nearly 100 days after the disaster.

Lacson reveals that the status of Yolanda rehabilitation work is “not even 10%” complete.

February 16, Sunday
DSWD shows in a fact sheet that the government’s bunkhouses have helped only less than 1% of homeless Yolanda survivors.

February 18, Tuesday
Speaking at a forum, Aquino vows to sustain the economic reforms achieved by the Philippines, but says it is the “genuine recovery” of areas hardest-hit by Yolanda that will be on top of the administration’s to-do list.

March 13, Thursday
At a forum, Aquino talks at length about his disappointment over Tacloban’s lack of preparation and mishandling of Yolanda, sharing incidents and details when the local government unit (LGU) failed to come through.

The Asian Development Bank (ADB) signs a $20-million grant to help 70 municipalities affected by Yolanda rebuild their villages and livelihoods.

March 17, Monday
In a Senate hearing, Commission on Audit (COA) chairperson Grace Pulido-Tan reveals that her agency is coming out with a report focusing on systems and procedures of aid, which she describes as “chaotic, crazy.”

April 3, Thursday
In a media briefing, DSWD’s Soliman says up to 130,000 survivors still live in tents nearly 5 months after Yolanda. This number, equivalent to around 28,000 families, is more than half the population of Tacloban City.

April 10, Thursday
DILG’s Roxas goes around Yolanda-affected towns and cities in Leyte to personally distribute P802 million in checks for the rehabilitation of public buildings.

April 15, Tuesday
In an interview with Rappler, Lacson reveals he was at times tempted to quit his post.

May 2, Friday
President Aquino III says the cost to rehabilitating communities is P100 billion – a third of the initial “daunting” estimate of P300 billion.

May 7, Wednesday
On the eve of Yolanda’s 6-month mark, officials admit that the national government still does not have a final rehabilitation plan.

May 12, Monday
Citing red tape and incompetence in the national government, Tacloban’s Romualdez tells Rappler that “emphasis should be made” on holding the Cabinet accountable for the delay in rehabilitation efforts.”

May 28, Wednesday
A fire razes a family’s tent in Tacloban City, killing the mother and her 5 children.

May 29, Thursday
In a statement, the UN High Commissioner for Refugees (UNHCR) pushes for permanent shelters for Yolanda survivors after a fire killed 7 tent dwellers in Tacloban City.

June 5, Thursday
At a forum on national land use planning, Lacson says they have identified some 4,000 hectares of government land as safe resettlement sites for displaced Yolanda victims.

July 15, Tuesday
Lacson says his office is waiting for Aquino to approve the phased implementation of the local recovery and rehabilitation plans of Tacloban City, Leyte, Samar, and Cebu amid Typhoon Glenda.

July 23, Wednesday
In another raid conducted by CIDG, over P15 million (US$346,200)* in “substandard construction materials” are seized from a warehouse in Tacloban City. Corrugated GI and plain sheets, steel bars, and plywood with no Philippine standard (PS) quality mark are seized.

July 28, Monday
In his State of the Nation Address, Aquino trumpets government efforts after Yolanda as he paints a rosy picture of Yolanda-hit areas. He, however, misses out on some statistics.

September 8, Monday
A COA report reveals that hundreds of millions of pesos in funds intended for the relief and rehabilitation of disaster victims did not reach them because government offices used them up for operations or kept them in banks.

October 16, Thursday
In its annual report on disasters, the International Federation of Red Cross and Red Crescent Societies (IFRC) names Yolanda as the deadliest natural disaster of 2013.