Facebook Twitter Copy URL
Copied
Through bills filed and in quotes, see how Senator Ferdinand Marcos Jr fares as a representative and senator

MANILA, Philippines – In 1995, nine years after the EDSA People Power revolt that ousted strongman Ferdinand Marcos, his only son, Ferdinand “Bongbong” Marcos Jr sought a seat in the Senate. Three years earlier, his mother Imelda sought the presidency, but placed 5th in the 7-person race.

Imelda and her children returned from exile in 1991. Aiming to entrench themselves in power again, Bongbong ran and handily won in the 1992 local elections as representative of the 2nd district of Ilocos Norte.

However, the 1995 senatorial race was a different story. Running under the Kilusang Bagong Lipunan (KBL) party founded by his father and as part of the Nationalist People’s Coalition (NPC) ticket, Bongbong ranked 16th, 4 places short of the winning circle. Nevertheless, he got more than 8 million votes, higher than former vice president Arturo Tolentino.

After a 3-year break, Marcos returned to local politics, becoming governor of Ilocos Norte by defeating Roque Ablan Jr, his father’s ally, in the 1998 polls. In the safety of their bailiwick, Marcos served for 3 terms.

In 2007, the governorship baton was passed to his cousin, Michael Marcos Keon, as Bongbong reclaimed his former post at the House of Representatives from sister Imee, who had already served out the maximum 3 terms. He was also selected House Deputy Minority Leader.

In 2010, instead of seeking a second term as congressman, Bongbong decided it was time to go national again. For his senatorial campaign, he allied with the Nacionalista Party (NP) of presidential candidate Manuel Villar. In the process, he earned the ire of KBL stalwarts.

However, his new political alliance proved favorable to the young Marcos, when he placed 7th in the senatorial polls, with over 13 million votes.

In 2014, four years into his first term as senator, his mother Imelda expressed her dream to have a second Marcos in Malacañang and regain the family’s lost glory.

Pre-election surveys consistently placed him among the tail-enders, with only 3% to 4% of survey respondents saying they will vote for Bongbong. So far, he has refrained from making any categorical statement about running for the presidency in 2016.

With only a year left before the elections, Rappler reviews Bongbong Marcos’ legislative performance, and collates a selection of quotes and statements concerning national issues. 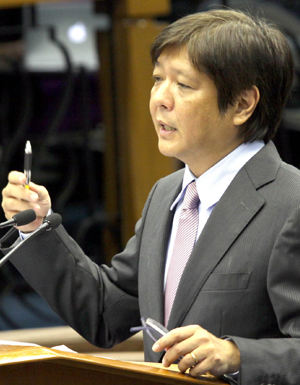 Marcos has also co-authored 4 Senate bills. One of them, Senate Bill 712, was approved as Republic Act 10645 or the Expanded Senior Citizens Act of 2010.

Among them are the Anti-Drunk and Drugged Driving Act, the Cybercrime Prevention Act, the Expanded Anti-Trafficking in Persons Act, and the National Health Insurance Act.

When he was Ilocos Norte representative in the 14th Congress (2007 to 2010), Marcos supported the passage of Republic Act 9522 or the Archipelagic Baselines Law of the Philippines as a member of the House bicameral conference committee.

Only 3 House bills in the 14th Congress were principally authored by him, including his version of the Archipelagic Baselines Law, which remained pending in the House committee on foreign affairs, according to the House Legislative Information System (LEGIS). But he was co-author of 21 other House bills, 6 of which later became law.

Meanwhile, at his first stint in the Lower House during the 9th Congress (1992 to 1995), Marcos was the author of 29 House bills and co-author of 90 more, which includes those that paved the way for the creation of the Department of Energy and the National Youth Commission.

“Granting, therefore, that the Chief Justice violated the SALN law, this certainly does not rise to the level of an impeachable offense. […] What we are doing is redefining the relationship between branches of government, and when such great affairs of state are uncertain, the resulting instability puts every Filipino’s future in limbo. This is an important, delicate, momentous event, and because of that we should tread very lightly.

– Marcos explains his vote to acquit ex-Supreme Court Chief Justice Renato Corona at the conclusion of the impeachment trial on May 29, 2012. Senators voted 20-3 to convict Corona, after being found guilty of the second article of impeachment, for failing to accurately declare his bank deposits and properties in his Statement of Assets, Liabilities and Net Worth (SALN).

On the Sin Tax Law

“It’s very clear in the law that tobacco farmers should receive a certain percentage from the revenues out of the excise tax collection from tobacco products. If the law is very clear on that, the government should make sure that the farmers will get their entitlement.”

– Marcos, on January 13, 2014, urging Congress to review the implementation of the Sin Tax Law.

On the Reproductive Health bill

“In my experience in public service, it became clear to me, after being witness to the agony and hardship of young women and men, when they find themselves in a situation they’re ill-prepared and often ignorant of. We must do something for them.”

– Marcos, explaining his vote in favor of the Reproductive Health Bill on December 17, 2012. The measure was signed into law by President Benigno Aquino III on December 21. It was later declared constitutional by the Supreme Court, even as it struck down certain provisions, on April 8, 2014.

On the Cybercrime Law

“The Internet, particularly social media, is the closest thing we have to [the] Athenian brand of democracy, where everyone can speak his mind freely. I think the Senate should give a high priority to bills seeking to protect freedom of expression in cyberspace.”

– Marcos, in a statement on February 19, 2014, announcing that he had filed a bill to amend the Cybercrime Prevention Act of 2012. The senator seeks to scrap the provision imposing a penalty for online libel higher than that imposed for libel committed through print and broadcast media. Marcos, however, was among the senators who voted to pass the law in 2012 with the contentious libel provision. Marcos explained that the committee report he signed “did not contain the libel clause.” 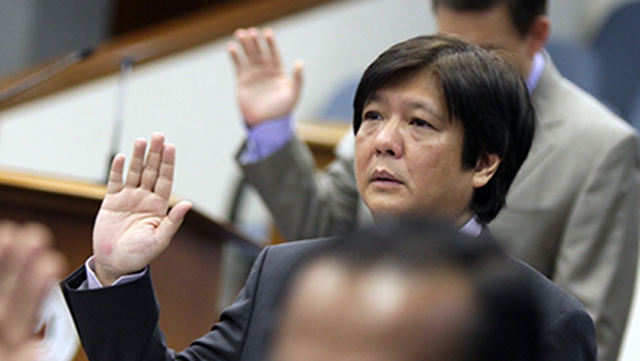 On his alleged involvement in the pork barrel scam

“Regarding the accusations that I am in cahoots with Ms. Napoles, let me reiterate for the nth time that I have never met her nor have I ever authorized any person to deal with her or any non-governmental organization which she allegedly has control of – whether on my behalf or on behalf of my office.”

– Marcos, in a statement on October 29, 2013, denying his involvement in the pork barrel scam. A month earlier, he said that an investigation by his office revealed that his signature in endorsement letters was forged. Marcos’ name was dragged into the controversy, after a former project coordinator, Catherine Mae “Maya” Santos, allegedly served as a “middleman” for Senators Marcos and Loren Legarda.

On Yolanda and politics

“What we are talking about here are people who are in hardship, people who are in great need, and when it comes to the question of life and death and survival, surely politics needs to take a backseat, and that’s why it’s been the subject of great discussion. Like anything else that befalls us, we always come away with lessons learned and try to do better the next time.”

– Marcos, when asked by Rappler on his opinion on politics figuring in discussions about response and rehabilitation efforts following Super Typhoon Yolanda in November 2013. The mayor of Tacloban City, one of the hardest-hit areas, is Marcos’ cousin, Alfred Romualdez.

On SK reforms and postponement of youth elections

“The Sangguniang Kabataan (SK) must first be reformed and restructured in order to effectively represent the needs and concerns of the youth sector. We need to prepare the significant legislation that would institute meaningful, timely and viable reforms in the SK.”

– Marcos, in a statement on February 2, 2015, after the Senate voted to postpone the SK elections for the second time in nearly two years. A week later, the Senate approved a bill, which Marcos co-authored, to reform the beleaguered SK system.

On the Mamasapano incident

On the Bangsamoro Basic Law

“If the BBL is part of the solution to bring peace to Muslim Mindanao, then we will pass it. But then we have to make sure that the legislation we pass is constitutional and enforceable. […] If the BBL is not the magic bullet but just a partial solution, then we have to continue looking for the other facets of the peace process that we feel would be important in bringing peace to Mindanao.”