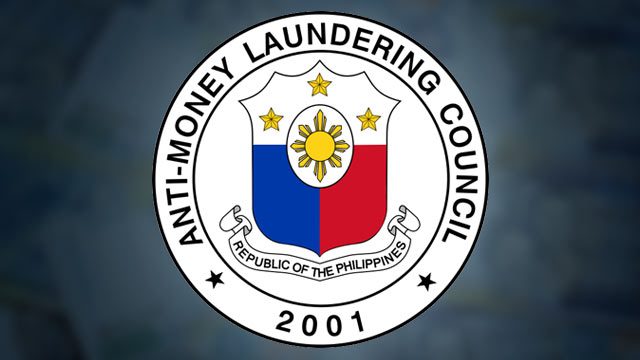 Facebook Twitter Copy URL
Copied
The AMLC serves as the country’s financial intelligence unit, which has both investigative and prosecutorial powers. Get to know the agency more.

MANILA, Philippines – The probe into the alleged ill-gotten wealth of Vice President Jejomar Binay resurfaced with the freeze order brought by the investigation of the Anti-Money Laundering Council (AMLC).

AMLC findings reveal that Binay, his wife Elenita, their son Makati Mayor Jejomar Erwin “Junjun” Binay Jr, and alleged dummies had “large and frequent” bank transactions from 2008 to 2014, leading the Court of Appeals to issue a freeze order on their bank accounts.

It was a probe that the Binay camp had sought to stop as early as March.

The AMLC was created through Republic Act 9160 or the Anti-Money Laundering Act (AMLA). It is tasked to implement both the AMLA and Republic Act 10168 or the Terrorism Financing Prevention and Suppression Act.

It serves as the country’s financial intelligence unit (FIU), similar to that of other countries like the Financial Crimes Enforcement Network (FinCEN) of the US and the Intelligence Processing and Action against Illicit Financial Networks Unit (TRACFIN) of France.

Unlike other FIUs, however, AMLC carries both investigative and prosecutorial powers.

Section 7 of RA9160 states that AMLC shall be composed of:

AMLA also states that members of the Secretariat must have served for at least 5 years in either the BSP, IC, or SEC. They are all considered regular employees of BSP and are entitled to benefits and subject to rules and regulations applicable to BSP employees of similar rank.

Based on the 2013 AMLC report, most of its Secretariat personnel, especially the financial investigators, had a law enforcement background from the National Bureau of Investigation (NBI), the Philippine National Police (PNP), and the Philippine Drug Enforcement Agency (PDEA).

One of the main tasks of AMLC is to penalize those who launder money, the act of attempting to conceal the illegal nature of proceeds from unlawful activities such as:

When AMLC finds there is probable cause to charge any person with money laundering, it files a complaint before the Office of the Ombudsman or the Department of Justice, which shall then conduct a further investigation. These agencies then file the necessary case before the Sandiganbayan or the Regional Trial Courts.

In the 2013 report of the Commission on Audit (COA), it was revealed that the AMLC was able to “locate, freeze and forfeit amounts of criminal proceeds” amounting to P3.95 billion. The agency was able to file a total of 83 cases in 2013, including 22 bank inquiry cases, 5 petitions for civil forfeiture, and 6 petitions for a freeze order.

The AMLC may file a freeze order on an account or property related to an unlawful activity. The freeze order shall last for a period of 20 days unless extended by the court.

The original version of AMLA actually gives the AMLC the power to directly freeze certain assets and accounts. This power, however, was removed with the passage in 2003 of an amendment via Republic Act 9194, which mandates that freeze orders have to come from the Court of Appeals.

The depositor has 72 hours upon receipt of the notice to explain why the freeze order should be lifted.

AMLA states that “no court shall issue a temporary restraining order or writ of injunction against any freeze order issued by the AMLC except the Court of Appeals or the Supreme Court.”

Among the freeze orders facilitated by the AMLC are:

An implication of the 2003 amendment was seen in the case of former military comptrollers Carlos Garcia and Jacinto Ligot, who were able to withdraw money just in time – before the court’s freeze order was released.

In a Senate hearing in 2011, former AMLC executive director Vicente Aquino explained: “Before the AMLC can get a freeze order from the CA, it has to go to its statutory counsel from the Office of the Solicitor General before a petition to freeze is filed with the CA. By time of filing, many eyes have seen the petition.” – Rappler.com