MANILA, Philippines (UPDATED) – On May 29, 2012, former chief justice Renato Corona was found guilty of betraying the public trust and was unseated as the highest magistrate of the land.

At the end of a 44-day trial, the Senate court voted 20-3 to impeach Corona for failure to declare some properties in his Statement of Assets, Liabilities and Net Worth (SALN). (See Rappler’s coverage of the Corona trial here.)

Since then, the very same Congress that impeached Corona has been reluctant to release copies of the SALNs of its members to the public. Even requesting for copies of these SALNs from the House of Representatives has not been easy.

As in previous years, Rappler sent a letter to the House of Representatives’ Office of the Secretary General for the release of the 2014 SALNs. The request was sent on April 29, a day before the deadline for submissions by public officials.

Section 8 of Republic Act 6713 mandates public officials to annually file their SALNs on or before April 30.

But the Office of the Secretary General pointed Rappler to the Legal Affairs Department, which released a memorandum on May 11 recommending the denial of the request. The memorandum said:

In 2012, the House of Representatives began refusing to automatically release the SALNs of all of its members. Instead, House Speaker Feliciano Belmonte Jr created a committee tasked with formulating rules and procedures on the public’s access to SALNs. (READ: House creates committee to study release of SALNs)

Belmonte also said that for the time being, requests for SALNs should be directed to the individual lawmakers themselves. When Rappler did so in 2012, only 5 congressmen released their SALNs.

Apart from the request to the Office of the Secretary General, Rappler also sent request letters from April 29 to May 13 to individual offices of all members of the House of Representatives, including the offices of the now late Enrique Cojuangco and former Akbayan party-list representative Walden Bello.

As of this writing, 30 congressmen voluntarily gave Rappler copies of their SALNs. These were obtained via email or in person. In 2014, Rappler received 2013 SALNs from 9 congressmen.

Meanwhile, 25 representatives explicitly declined to provide Rappler a copy of their 2014 SALNs for various reasons.

Northern Samar Representative Emil Ong explained his refusal, saying that the purpose of the SALN is to expose unexplained wealth. As such, SALNs should only be made available through a court order intended to aid investigations. Releasing these documents without a court order would put public officials at risk, he also said.

The staff of Valenzuela City 2nd District Representative Magtanggol Gunigundo told Rappler the congressman was reluctant to provide his SALN because in the past he was allegedly reported to be a “multi-millionaire congressman” when, in fact, he wasn’t. A quick check with past stories yielded nothing about such reports. Gunigundo, according to his staff, was wary about the possibility of the media misrepresenting information contained in his SALN. The staff of Batanes Representative Henedina Abad said she declined because the legislator has issues with Rappler.

The rest have yet to respond to our request. Other staffers cited various reasons for the congressmen being unable to reply to the requests, among them:

Bello provided two SALNS: his December 2014 SALN when he was still in Congress, and his exit SALN for March 2015. Bello resigned from his congressional post in March over irreconcilable differences with his party related to the Mamasapano bloodbath.

When conducting follow-ups, most of the Representatives’ staff told Rappler to go to either the Office of the Secretary General or the Records Office to obtain SALN copies. Both offices, however, declined to release the documents.

Most of the staffers were unaware of a resolution that the Office of the Secretary General and the Records Office should refer requests for SALNs to the offices of the individual members of Congress.

On May 22, the House of Representatives released only a summary of the wealth declaration of the incumbent congressmen. 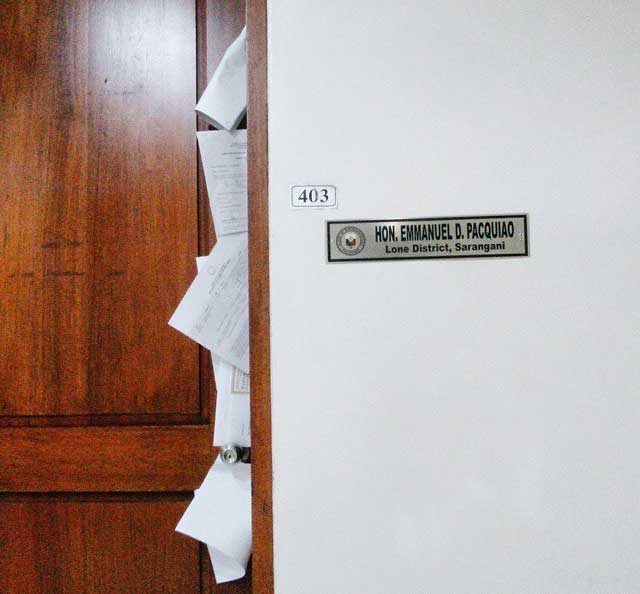 During the days when Rappler visited the House of Representatives from April 29 to May 25 to follow-up on requests, the offices of the following congressmen turned out to be closed.*

Rappler visited these offices 7 times mostly in the afternoons and checked on the closed offices at least twice. We had to send the letters for Agarao, Bonoan, Garcia, Ocampo, Pacquiao, Piamonte, and Romarate via the mailing office when we were instructed by the Information Desks at the House of Representatives supposedly because no staff were present at the time of the visits. While the rest were able to receive the letters, follow-ups yielded nothing.

Staffers explained the offices were closed on some days because representatives worked from their districts or had separate offices in other locations.

Among the House members who were part of the prosecution team, the following remain in office:

Only Bag-ao and Colmenares have provided Rappler copies of their SALNs as of this writing.

A total of 201 House members signed the impeachment complaint against Corona in December 2011. At least 118 of the signatories are members of the present Congress.

Of the signatories, those who released their SALNs to Rappler are:

Those who declined our requests and are signatories to the Corona impeachment complaint are:

Ong however denies supporting the impeachment of Corona. In an interview with Rappler, he said he only recalled agreeing with the impeachment complaint because it was “correct in form and substance” but didn’t agree with its merits. He added that Corona was not given the chance to explain why he failed to declare certain assets in his SALN.

The rest of the impeachment signatories have yet to respond to our request. – with reports from Abigail Abigan, Alex Bichara, and Janina Lim/Rappler.com

*Editor’s Note: In a previous version of this story we reported that certain offices of members of the House of Representatives were “almost always closed.” This is not the case as we were told that it just so happened that some of these offices were closed when we visited them. However during the times we visited and were told by the Information Desk that specific offices were closed, we were directed to the congressional mailing office.