SCOT: A driverless car for the future, today SINGAPORE – In an era where hoverboards and motorized personal transporters seem to have snuck out of the future to amaze us, another technology that is bound to change the transport sector is now within the realm of reality – driverless vehicles.

A team of engineers and researchers in Singapore converted a conventional sedan, a Mitsubishi i-Miev, to an autonomous car dubbed “SCOT” (Shared Computer Operated Transport) and tested it for public use this year. SCOT emits lasers and reflect the light to detect the road, and determine what is in its surroundings.

SCOT’s main difference from the the other models of self-driving cars is its use of LIDAR (light detection and ranging). A technology that is available for the public, it comes at a lower cost compared to other automated systems. It allows SCOT to drive independently without the use of a Global Positioning System (GPS). This technology is especially helpful when going through tunnels, and other places where GPS signals are low.

It is powered by batteries which could be charged within 6-8 hours and could cover a total distance of 150 kilometers when fully charged. Its current maximum speed on road is 25 km/h. SCOT also boasts of working well in poor lighting, indoors, or under moderate rain.

Scott Pendleton, one of the post-graduate students under Future Urban Mobility of SMART (Singapore-MIT Alliance in Research and Technology) based in the National University of Singapore (NUS), said there are numerous advantages of autonomous vehicles.

The technology, Pendleton explained, helps reduce the probability of accidents due to human error, and can be a boon for the elderly and those with disablities. It also has lower carbon emissions – 20 to 50% – as the vehicles are electric-powered. 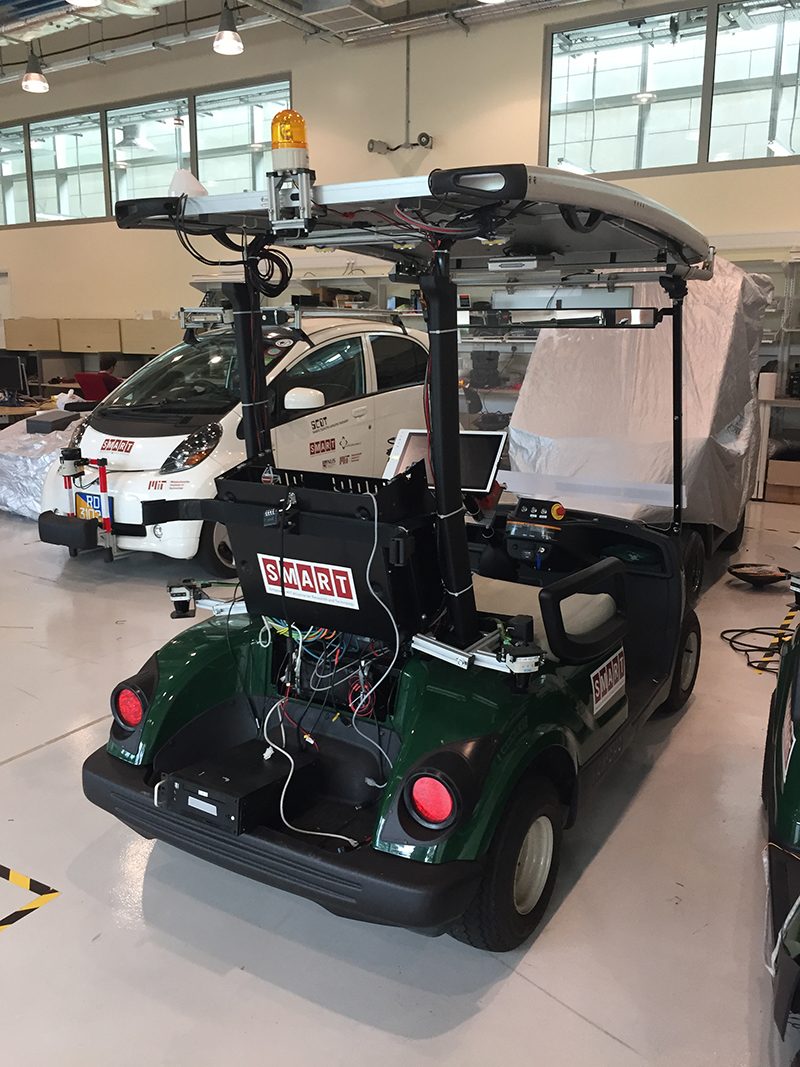 Google has launched its own self-driving car in 2010, paving the way in making science-fiction tales of driverless vehicles a reality. It began the public testing of its vehicle in California this July. Other companies have released or announced plans to release driverless vehicles, including Nissan, Mercedes-Benz, Volkswagen, GM, Volvo, Tesla and BMW.

A July 2015 report from Business Insider Intelligence (BI Intelligence) forecasts that 10 million self-driving cars will be on the road by 2020. However, it qualified that self-driving cars are any vehicle with features “that allow it to accelerate, brake, and steer a car’s course with limited or no driver interaction.” Which means, some features of this technology are already available with the current cars in the market.

It also said that a fully autonomous vehicle like SCOT, will debut on the road in 2019.

Golf cart prototypes of SCOT were tested for public use in Singapore’s Chinese Garden, a park and tourist destination. Pendleton said that among the challenges they faced during the public testing is the vehicle could easily respond to pedestrians and other smaller road obstructions.

Prof. Marcelo Ang, a Filipino engineer who is part of the team behind SCOT, believes that driverless cars will be available for public use around 10 years from now, for “constraint environments” or controlled areas like resorts and parks. He said that it is important to be able to predict their motion so the vehicle could drive more effectively.

Asked if a driverless car could help ease the traffic congestion Filipinos experience in Metro Manila, Pendleton said that while it may not be available for the public immediately, it could offer an alternative mode of transportation, similar to carpooling, which in effect could lessen the number of private vehicles on the road.

“If I can guarantee you that you can get a car at your doorstep within 5 minutes, and the car can take you anywhere without you driving it, will you still want to own a car?” Ang said said. – Rappler.com