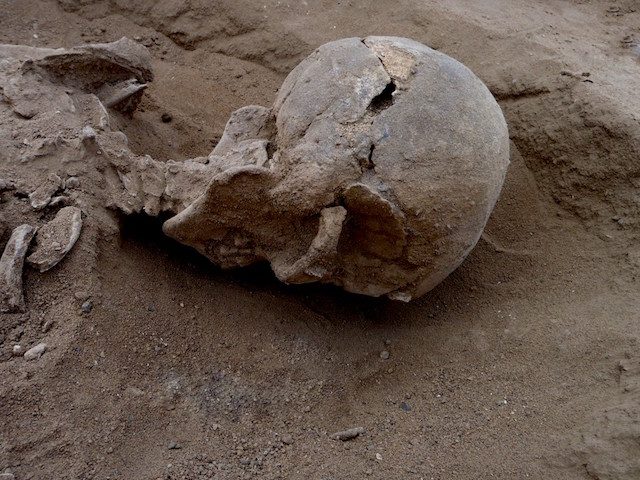 PARIS, France – About 10,000 years ago, a small band of men, women and children were captured by a rival clan before being tied up, shot with arrows and bludgeoned to death.

Their shattered remains fell into a lagoon, and were preserved in sediment for millennia.

On Wednesday, January 20, scientists presented them as evidence of the oldest-known human massacre, a finding that adds to the debate about why humans make war.

The bloodshed occurred when our prehistoric ancestors lived as hunter-gatherers, on the cusp of the agricultural revolution that saw early humans settle down to till the land.

Unearthed at Nataruk, near Kenya’s Lake Turkana, the battered bones provide “conclusive evidence of something that must have been an inter-group conflict,” Cambridge University anthropologist Marta Mirazon Lahr explained.

Lahr led a study published in the journal Nature.

There is other fossil evidence of violence against even older individual humans, but none of clashes between groups.

Lahr and her team dug up 12 skeletons, more or less intact, in what would have been fertile land on the edge of a lagoon 10,000 years ago, but is now barren semi-desert.

Ten bore the marks of a violent death – embedded in some of the skeletons were arrow heads made from a black rock called obsidian.

The dig also yielded other skeletons in fragments, including those of small children.

The first skeleton the team discovered was that of a man lying face down, beaten to death.

“The injuries suffered by this man crushed both the side and the front of the head inwards, causing a number of fractures that radiated throughout the skull, and the neck is also broken. So I am sure the second blow killed him,” Lahr said in a Nature podcast.

Other skeletons also had blows to the head, 4 had injuries consistent with arrow wounds, and some had trauma to the knees, hands, or ribs.

One was a young woman found in a seated position.

“She had her hands crossed between the legs, lying on the feet that were also crossed. This may suggest that she was bound at the time of death,” said Lahr.

“And she was pregnant, so that was actually a moment that we all stopped to think.”

The remains of a 6-to-9-month-old fetus was found in the skeleton’s abdominal cavity.

The origins of war-making is a controversial topic, touching as it does on the very essence of human nature – are we born with a capacity for organised violence like our close cousins chimpanzees, or do circumstances make us so?

Some anthropologists have suggested war arose along with the concept of ownership that came with humans settling down to till the land.

But the new study contends that warfare was a feature of human already 10,000 years ago, when we were still mainly nomadic.

“My interpretation is that this was a small community, a foraging party, and that they were surprised by an attack,” said Lahr.

But the reason remains unclear, and the nature vs. nurture argument unresolved.

“The massacre at Nataruk could be seen as resulting from a raid for resources – territory, women, children, food stored in pots,” the study authors wrote.

But it could also indicate “a standard antagonistic response to an encounter between two social groups.”

Either way, the deaths “are testimony to the antiquity of inter-group violence and war,” concluded the study. – Mariëtte Le Roux, AFP / Rappler.com