A ‘green revolution’ that may save Filipino coconut farmers

GUINAYANGAN, Philippines – Rizal and Renida Marjes’ backyard reminded me of a wild version of the vegetable and fruit stalls in my neighborhood grocery.

Like those well-lit stalls, produce was presented in different levels.

Stoic coconut trees towered above us, as if on the highest shelf. A rung below were the mango and chico trees waving their leaves to the wind. And on the lowest levels were squat banana trees, eggplant, sitaw, and neat rows of pineapple.

But the Marjes’ garden trumped my grocery in one regard: they could take from its bounty without having to pay at a counter.

The profusion of their garden, just a dot in the vastness of Quezon’s farmlands, made me feel like I was inside a green bubble.

It was not always so. Rizal and Renida began as one of the thousands of coconut farmers in Quezon. Just over a year ago, their farm looked like all the other coconut farms in the province: full of coconut trees and not much else.

But those years taught them a hard lesson. Storms blew and coconut-damaging pests came in droves.

(When the coconut trees are hit by a storm, all is gone. People here depend only on coconut trees. When a storm strikes, we lose everything. People are helpless and hungry.) 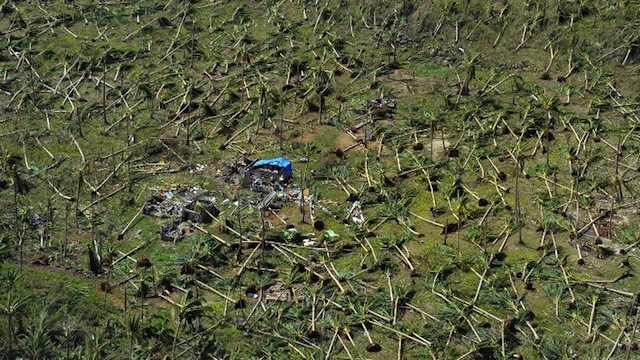 Of the 14,700 hectares of farmland in Guinayangan, some 12,000 hectares are devoted to coconut farming, according to the municipal agricultural office.

These coconut farms are regularly devastated by typhoons. Strong winds rip off the coconut tree’s life-giving leaves or break off its trunks.

From 2010 to early 2015, most of Quezon’s coconut trees also became infested with a new species of coconut scale insect.

The net effect of these disasters is misery for coconut farmers like Rizal and Renida. 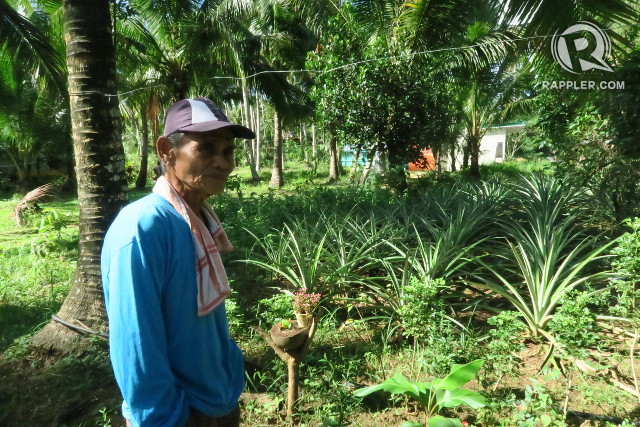 Planting coconut has become more of a gamble. For coconut farmers, among the poorest workers in the Philippines, they’re gambling with their lives.

Around 41% of coconut farmers live below the poverty line, almost double the national average of 25%. The average coconut farming household earns a meager P16,000 ($355) a year.

We try to make the point that climate-smart agriculture doesn’t have to be new.

Tired of this game of chance, the Marjes couple decided they couldn’t live on coconut alone.

With the help of the Department of Agriculture (DA) and the International Institute of Rural Reconstruction (IIRR), they tried out a concept called agroforestry.

In agroforestry, farmers plant more than one type of crop and in different heights – a concept called multi-storey cropping. Like in the Marjes’ farm, you’ll find coconut trees or tall fruit trees watching over everything.

In lower levels are shorter fruit trees, coffee or cacao trees, and herbal plants. On the ground are pineapples, tuber and root crops like cassava, potato, and peanut.

The simple goal of agroforestry is to help coconut farmers survive even if their main crop, coconut, is damaged by unforeseen events. (READ: Coconut, rice farmers worst hit by Yolanda)

“It’s the principle of diversifying the production base of farmers because the primary production system here is coconut, just coconut. Imagine if typhoons will be a regular occurrence and so farmers’ livelihoods will be at a disadvantage,” said Rene Vidallo of the IIRR. 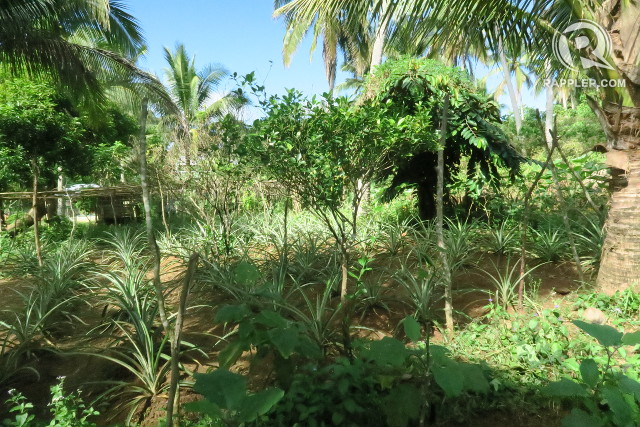 “You have all this space between the coconuts not being used, so we are developing options that can be used within the coconut system in the upland,” he said.

Cassava to the rescue

The idea of growing crops other than coconut has caught on.

In September 2014, the IIRR gave the town one truckload of cassava planting materials. Twenty-one farmers in 6 barangays began cultivating cassava.

Today, the numbers have doubled with 47 farmers in 12 barangays now producing cassava, said William Lopez of the municipal agriculture office. The size of land devoted to cassava has more than tripled – from 3 hectares in 2014 to 10 hectares in early 2016.

Heartened by how well farmers took to the crop, the DA sent them 3 post-harvest machines and more cassava planting materials.

After all, it’s the DA who is leading calls for Filipino farmers to plant cassava as an alternative to rice and as an intercrop.

This is because cassava is well adapted to surviving droughts and storms compared to other crops.

The cassava-planting farmers are already reaping the fruits of their labor.

Seen in this light, the agroforestry at work in the Marjes’ farm and the growing trend of intercropping cassava in Guinayangan are both practices of climate-smart agriculture.

They’re not entirely new concepts. In fact, intercropping had been a traditional practice that was soon lost when farmers began working in the cities.

“If the male leaves the farm, then there will be less manpower to work on the farm. So eventually they just focus on one crop. Coconut would be the easiest because they just wait for 3 or 4 months, and then they harvest,” explained Vidallo. 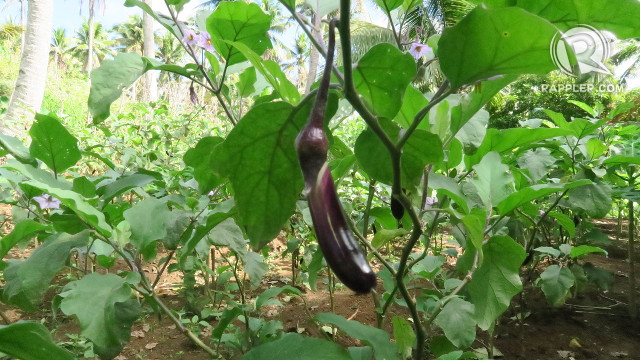 But strategies to help farmers cope with a changing climate don’t have to be new to work.

“We try to make the point that climate-smart agriculture doesn’t have to be new. Some of the sustainable agriculture, regenerative technologies of the past that have been promoted, they can be looked at within the climate change lens now and just have to be tweaked a little bit,” said Gonsalves.

Farmers have to be part of the process. Rizal Marjes, for instance, is attentive as Gonsalves explains the best way to water and apply fertilizer to his pineapples.

The Marjes couple has benefited from training sessions that explained to them the other benefits of agroforestry. For instance, when crops of varying heights are grown together, they create a “microclimate” that protects the individual plants from harsh climate conditions.

The tallest trees provide shade for the lower plants, shielding them from sudden rises in temperature. The shade also prevents water in the soil from evaporating too fast, as would be the case if exposed to sunlight. The retained soil moisture is thus absorbed more efficiently by the plants.

Far below the trees, the root crops are also doing their share. Their rooting systems loosen up the soil, fix nutrients, and introduce good microorganisms, making the soil more fertile for the rest of the crops.

For Gonsalves, the openness of Guinayangan farmers to these climate-smart practices proves that helping them adapt is just a matter of introducing concepts the right way.

The project began with a simple directive for farmers to “just try it” and the provision of seeds and planting materials they would need.