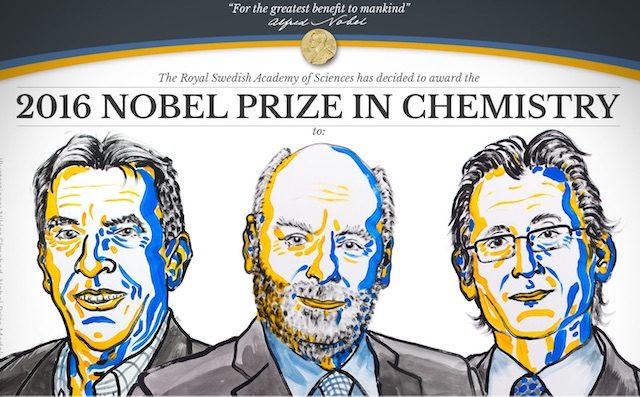 MANILA, Philippines (4th UPDATE) – A trio of scientists from Europe on Wednesday, October 5, became the latest Nobel Laureates for Chemistry thanks to their work on molecular machines – the smallest machines ever made.

“They have developed molecules with controllable movements, which can perform a task when energy is added,” the academy said in its announcement.

The trio all hail from Europe: Sauvage from France, Stoddart from the United Kingdom, and Feringa from the Netherlands. Both Sauvage and Feringa currently work in their home countries, the former at the National Center for Scientific Research (CNRS), France and the latter at the University of Groningen. Meanwhile Stoddart is currently working at Northwestern University in Illinois.

The three will equally share the 8 million Swedish krona prize.

“Nobel Laureates in Chemistry have taken molecular systems out of equilibrium’s stalemate and into energy-filled states in which their movements can be controlled,” the academy said.

Work on molecular machines was started by Sauvage in 1983, by his successful work on linking two ring-shaped molecules together to form a chain called a catenane. This was followed by Stoddart in 1991, when he developed the rotaxane, in which a molecular ring is threaded onto a thin molecular axle that can move.

In 1999 Feringa developed a molecular motor, and also designed a nanocar, the academy explained in its press release.

“Molecular machines will most likely be used in the development of things such as new materials, sensors and energy storage systems,” it added.

“The molecular motor is at the same stage as the electric motor was in the 1830s, when scientists displayed various spinning cranks and wheels, unaware that they would lead to electric trains, washing machines, fans and food processors.”

Molecular machines will “most likely be used in the development of things such as new materials, sensors and energy storage systems,” it said.

Opportunities for the future

Feringa told reporters at the Nobel press conference that the prizewinning research offered great opportunities for the future.

“I feel a little bit like the Wright brothers, who were flying 100 years ago for the first time. And then people were saying, ‘why do we need flying machines?’ And now we’ve got the Boeing 747 and the Airbus,” he said by video link.

“We will build those smart materials in the future. That is a big opportunity – materials that will reconfigurate, that will change, that will adapt themselves, that have properties that can change because they pick up a signal.”

Sauvage told Agence France-Presse he was “very surprised” and “felt enormously happy” to have won the prize.

The chemistry prize is the third Nobel to be announced this week.

On Tuesday, October 4, the physics prize went to British scientists David Thouless, Duncan Haldane and Michael Kosterlitz for their work on “topology”, a mathematics field studying unusual phases or states of matter.

On Monday, October 3, the medicine prize went to Yoshinori Ohsumi of Japan for his pioneering work on autophagy – a process whereby cells “eat themselves”, which can result in Parkinson’s and diabetes when disrupted.