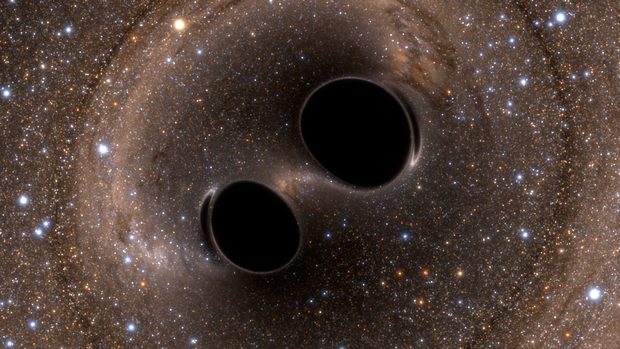 Facebook Twitter Copy URL
Copied
The physics prize is the second of the Nobels to be awarded, after the medicine prize

STOCKHOLM, Sweden – Scientists behind the groundbreaking discoveries of gravitational waves and the existence of dark matter are seen as potential favorites for Tuesday’s (October 4) announcement of the Nobel Physics Prize.

Gravitational waves are ‘ripples’ in the fabric of space-time caused by violent processes in the Universe, such as colliding black holes or the collapse of stellar cores.

Physicists Ronald Drever of Britain and Kip Thorne and Rainer Weiss of the US first observed them in September 2015, and announced their discovery in February 2016. And since then, they have clinched all the major astrophysics prizes to be had.

Their discovery opens a new door into the mysteries of the Universe, and confirms one of Albert Einstein’s predictions in his 1915 theory of general relativity, for which he was awarded the 1921 Nobel Physics Prize.

Drever, Thorne and Weiss co-created the Laser Interferometer Gravitational-wave Observatory (LIGO) at the prestigious California Institute of Technology, which has taken home 17 Nobels since the prizes were first awarded in 1901.

Among other research seen as worthy of the physics prize this year is the 1975 discovery of galaxy rotation rates, which led to the theory of dark matter. Americans Vera Rubin and Kent Ford could be honored for their work in this field.

Last year, the prize went to Japan’s Takaaki Kajita and Canada’s Arthur McDonald for determining that neutrinos have mass, a key piece of the puzzle in understanding the cosmos.

The physics prize is the second of the Nobels to be awarded, after the medicine prize was on Monday (October 3) awarded to Yoshinori Ohsumi of Japan. He was honored for his pioneering work on autophagy – a process whereby cells “eat themselves” – which when disrupted can cause Parkinson’s and diabetes.

The peace prize jury has sifted through an avalanche of nominations this year – a record 376, almost a hundred more than the previous record in 2014.

Among those often cited as likely winners are the architects of two historic accords: the recent peace deal between the Colombian government and the leftist FARC rebels; and the Iranian nuclear deal.

But in a shock upset, Colombians on Sunday, October 2, voted against the peace deal by a razor-thin majority in a referendum, all but annihilating the chance of taking home the Nobel, prize experts predicted.

Meanwhile, Stockholm’s literary circles are abuzz with a plethora of names of possible laureates for the literature prize, some more likely than others.

The Swedish Academy, which awards that prize, could tap superstar novelists such as Philip Roth of the US or Haruki Murakami of Japan, or some lesser known writers such as Norwegian playwright Jon Fosse or Syrian poet Adonis. – Rappler.com