Oct 21, 2016 7:45 AM PHT
Maria Isabel Garcia
Facebook Twitter Copy URL
Copied
[Science Solitaire] As the daily target of brands, do you know how these affect your brain and how you choose? 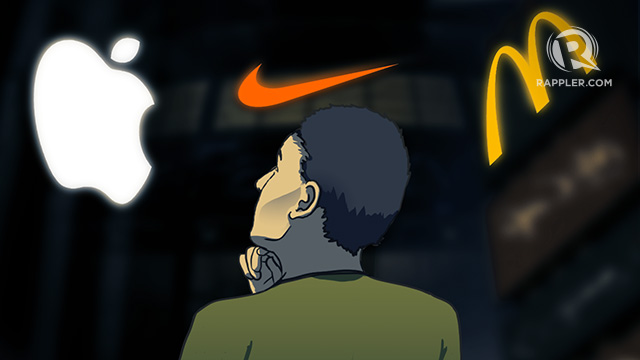 When you are born, you are initiated into the world and it is a branded world that bombards you with at least 600 brand messages a day. Companies know very well how branding determines their fates but do you, as the daily target of these brands, know how these affect your brain and how you choose?

“Brands” came about initially because makers of goods wanted it as a mark of ownership (think cattle branding). Then, it quickly became a mechanism to gain one’s edge in a competition which is a very strong and natural human tendency, whether between individuals or groups. Eventually, because of the industrial revolution, humans became so good at the standardized mass production of anything that any producer would want to distinguish their goods from the rest.

For consumers, brands became the mental shortcut to laboriously checking out the quality (in all its forms such as sanitary packaging, safety, reliability) and price reasonability of an item. The “brand”, as it was perceived, told you all you needed to know so you can decide which ones to buy. So whether it was livestock or company stocks, brand became a distinguishing factor.

But brand perception is not a game of truths but a game of tomes – the narrative keys that companies spin toward consumers’ rational and emotional locks. Sometimes their claims are real, but sometimes, they are far from it. Often, they are not black or white.  Because our brains cannot compute and check out the claims of each and every brand that we buy, we latch on to only a few signals of the brand and among these few, “price” stands out. Study after study showed that we see price as one of the main indicators of quality.

Whether it was buffets or wine,  studies showed that the higher-priced ones are perceived as better than cheaper ones even if the foods and wine that were offered are exactly the same. In the study that asked people to rate the quality of the same wine as they changed the price, those who drank the higher priced but same wine had significantly more activity in their medio orbital prefontal cortex – the brain part which is associated with pleasurable feelings.

And guess what, even if hooking up with a potential mate is not in your consciousness when you choose a brand, studies showed that both males and females choose brands that are tied to sexual motivations. However, they take different forms for males and females.

Take for instance, the choice of cars. Every time I see a congregation of sports cars, I ponder, not without a grin, the testosterone density per square meter of the area where they all are. I note that in these sports car events, the cars are always either exclusively owned by males or overwhelmingly reined in by men.  And you know why? Because they feel “sexy” with sports cars versus when they drive family vans or beat-up sedans. And this finding is not based on the expressions of their faces or their language which are also certainly interesting, but on the testosterone that fills them when they ride these sports cars. A sports car event is practically a Testosterone Fest!  When you know this, it is no longer an exciting mystery why men in their mid-life, whose testosterone begins to decline, would want to drive sports cars.

And while testosterone levels, and thus their mating potential, are the driving force behind men’s love for sports cars, females seem to choose brands to stave off female rivals. In a 2014 study published in the Journal of Evolutionary Psychology, aptly entitled The Rival Wears Prada: Luxury Consumption as a Female Competition Strategy, researchers found that women spend on luxury goods not directly to attract males but to compete with female rivals, whether they are conscious of it or not. An interesting insight from the same study found that women perceive other women who spend on luxury goods to be “more attractive, flirty, young, ambitious, sexy” but “less loyal, mature and smart” by other women.

Pull back your perspective a bit more and we also see that brands are fed by the natural tendency of humans, regardless of gender or sex, to be anxious about their status as to how others perceive them. This is even more pronounced with the advent of our other lives in social media where the opinions of faceless beings come to bear on how we are perceived by everyone else. Status anxiety is a daily widget that haunts our existence.  And to make things even more interesting, a study found that there is a link between countries with unequal income and how anxious people were about their status.

The Philippines of course is characterized by great disparities in income among social classes and so it should follow that status anxiety here is relatively more intense and why it is a lot lower in Denmark. This is the kind of situation that brands can naturally exploit. This is also the reason why endorsements by celebrities with perceived edge in traits, especially beauty, can get away endorsing products they know nothing about or had a hand in making or even use. Choosing the products they endorse gives us the feeling of entitlement that we have made it, like those celebrities seemed to have – as far as that chicken, bag, shoe, house, or skin-whitening has brought us and our status-anxious selves.

So if status anxiety seems like an illness that makes us addicted to brands, what could be the antidote? I don’t know. I think I struggle with it just like everyone else. For myself, it helps to plot an adventure to places where I am clueless about which brands matter, if they matter at all. Status anxiety is more like a permanent human condition and you just have to manage it so that you get to still recognize who you are even without the help of brands.

Or maybe we can all have some unbranded, universal philosophy of understanding ourselves more so we can constantly winnow “being” from all that “having.”  – Rappler.com