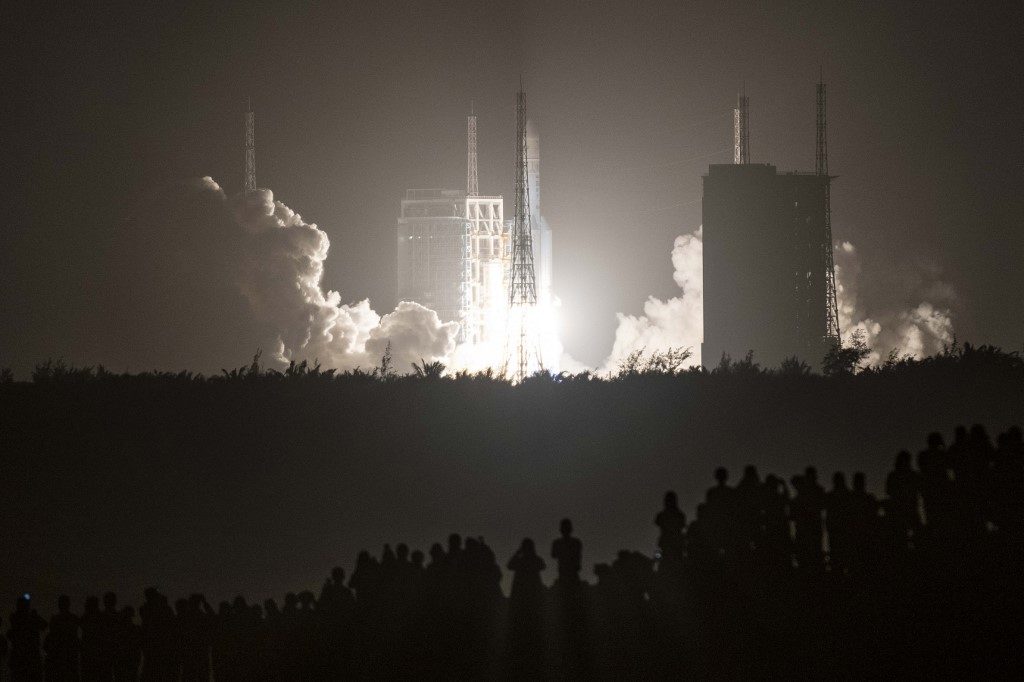 LUNAR PROBE. A Long March 5 rocket carrying China's Chang'e-5 lunar probe launches from the Wenchang Space Center on China's southern Hainan Island on November 24, 2020, on a mission to bring back lunar rocks, the first attempt by any nation to retrieve samples from the moon in four decades.

Facebook Twitter Copy URL
Copied
The mission's goal is to shovel up lunar rocks and soil to help scientists learn about the Moon's origins, formation, and volcanic activity on its surface

An unmanned Chinese spacecraft landed on the Moon Tuesday, December 1, state media reported, marking only the second time the country had successfully placed a probe on the lunar surface.

The Chang’e-5 spacecraft “landed on the near side of the moon late Tuesday,” the Xinhua report said, citing the China National Space Administration.

China has poured billions into its military-run space program, with hopes of having a crewed space station by 2022 and of eventually sending humans to the Moon.

The mission’s goal is to shovel up lunar rocks and soil to help scientists learn about the Moon’s origins, formation and volcanic activity on its surface.

If successful, China will be only the third country to have retrieved samples from the Moon, following the United States and the Soviet Union in the 1960s and 1970s.

The Chinese probe is to collect two kilograms (4.5 pounds) of surface material in a previously unexplored area known as Oceanus Procellarum – or “Ocean of Storms” – which consist of a vast lava plain, according to the science journal Nature.

It is expected to collect material during one lunar day – equivalent to around 14 Earth days.

The samples will then be returned to Earth in a capsule programed to land in northern China’s Inner Mongolia region in early December, according to US space agency NASA. – Rappler.com