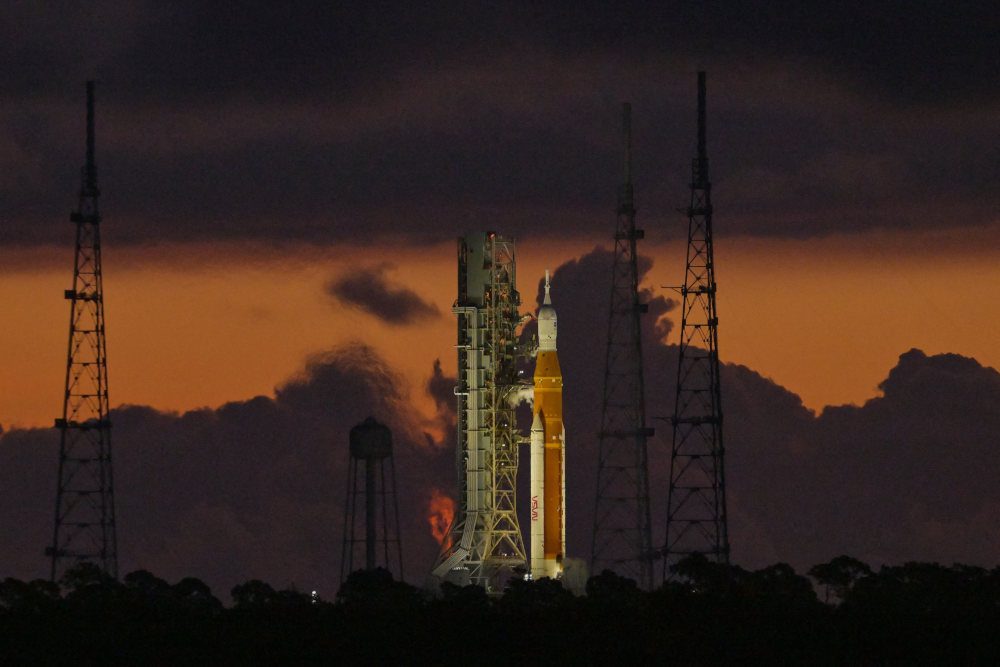 ARTEMIS 1. NASA's next-generation moon rocket, the Space Launch System (SLS) , with its Orion crew capsule on top, sits on the pad early in the morning before the unmanned Artemis 1 mission was scrubbed, at Cape Canaveral, Florida, USA, on August 29, 2022.

WASHINGTON, DC, USA – NASA aims to make a second attempt to launch its giant next-generation moon rocket on Saturday, September 3, five days after a pair of technical issues foiled an initial try at getting the spacecraft off the ground for the first time, agency officials said on Tuesday.

But prospects for success on Saturday appeared clouded by weather reports predicting just a 40% chance of favorable conditions that day, while the US space agency acknowledged some outstanding technical issues remain to be solved.

At a media briefing a day after Monday’s first countdown ended with the flight scrubbed, NASA officials said Monday’s experience was useful in troubleshooting some problems and that additional difficulties could be worked through in the midst of a second launch try.

In that way, the launch exercise was serving essentially as a real-time dress rehearsal that hopefully would conclude with an actual, successful liftoff.

For now, NASA officials said, plans call for keeping the 32-story-tall Space Launch System (SLS) rocket and its Orion astronaut capsule on its launch pad to avoid having to roll the massive spacecraft back into its assembly building for a more extensive round of tests and repairs.

If all goes as hoped, the SLS will blast off from the Kennedy Space Center in Cape Canaveral, Florida, on Saturday afternoon, during a two-hour launch window that opens at 2:17 p.m., sending the Orion on an uncrewed, six-week test flight around the moon and back.

The long-awaited voyage would kick off NASA’s moon-to-Mars Artemis program, the successor to the Apollo lunar project of the 1960s and ’70s, before U.S. human spaceflight efforts shifted to low-Earth orbit with space shuttles and the International Space Station.

NASA’s initial Artemis I launch attempt on Monday ended after data showed that one of the rocket’s main-stage engines failed to reach the proper pre-launch temperature required for ignition, forcing a halt to the countdown and a postponement.

Speaking to reporters on Tuesday, mission managers said they believe a faulty sensor in the rocket’s engine section was the culprit for the engine cooling issue.

“The way the sensor is behaving doesn’t line up with the physics of the situation,” said John Honeycutt, NASA’s SLS program manager.

The sensor was last checked and calibrated months ago in the rocket factory, Honeycutt said. Replacing the sensor would require rolling the rocket back to its assembly building, a process that could delay the mission for months.

The first voyage of the SLS-Orion, a mission dubbed Artemis I, aims to put the 5.75-million-pound vehicle through its paces in a rigorous demonstration flight pushing its design limits, before NASA deems it reliable enough to carry astronauts.

Named for the goddess who was Apollo’s twin sister in ancient Greek mythology, Artemis seeks to return astronauts to the moon’s surface as early as 2025, though many experts believe that time frame will likely slip by a few years.

The last humans to walk on the moon were the two-man descent team of Apollo 17 in 1972, following in the footsteps of 10 other astronauts during five earlier missions beginning with Apollo 11 in 1969.

Artemis also is enlisting commercial and international help to eventually establish a long-term lunar base as a stepping stone to even more ambitious human voyages to Mars, a goal NASA officials say would probably take until at least the late 2030s to achieve.

But NASA has many steps to take along the way, starting with getting the SLS-Orion vehicle into space. – Rappler.com