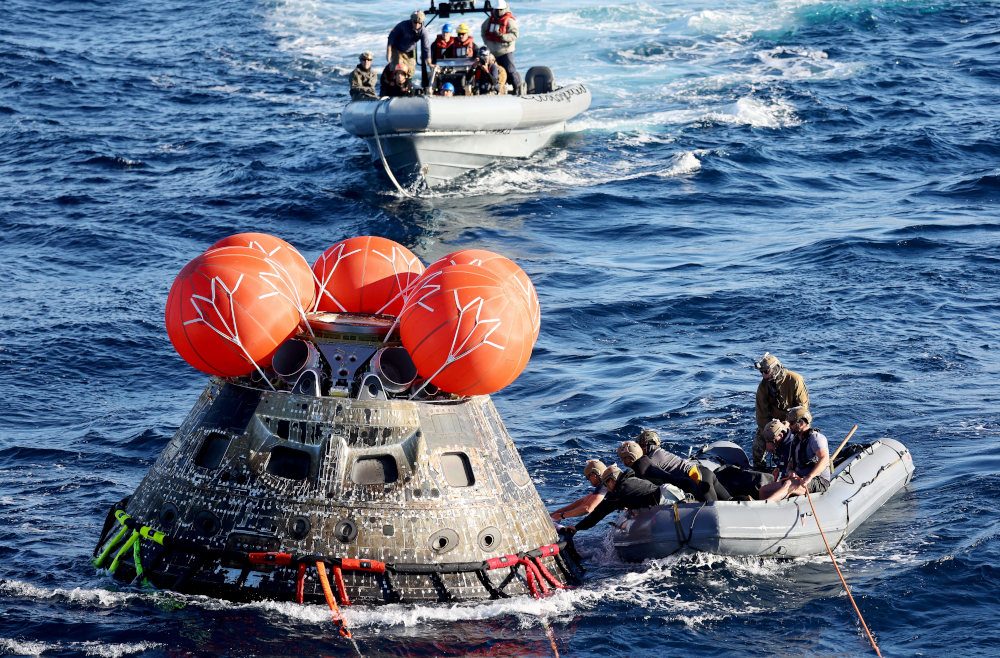 ORION'S RETURN. US Navy divers secure NASA's Orion Capsule during recovery operations after it splashed down following a successful uncrewed Artemis I moon mission on December 11, 2022 seen from aboard the U.S.S. Portland in the Pacific Ocean off the coast of Baja California, Mexico.

NASA’s Orion capsule barreled through Earth’s atmosphere and splashed down in the Pacific ocean on Sunday, December 11, after making an uncrewed voyage around the moon, winding up the inaugural mission of the US agency’s new Artemis lunar program 50 years to the day after Apollo’s final moon landing.

The gumdrop-shaped Orion capsule, carrying a simulated crew of three mannequins wired with sensors, plunked down in the ocean at 9:40 am PST (1740 GMT) off Mexico’s Baja California peninsula, demonstrating a high-stakes homecoming before NASA flies its first crew of Artemis astronauts around the moon in the next few years.

“This was a challenging mission, and this is what mission success looks like,” NASA’s Artemis I mission manager Mike Sarafin told reporters after splashdown, adding that his team didn’t immediately notice any issues with Orion’s return from space.

A US military helicopter and a group of fast boats approached the capsule after splashdown for about five hours of inspections before Orion is hoisted aboard a U.S. Naval vessel for a trip to San Diego, California.

The splashdown capped a 25-day mission less than a week after passing about 79 miles (127 km) above the moon in a lunar fly-by, and came about two weeks after reaching its farthest point in space, nearly 270,000 miles (434,500 km) from Earth.

Roughly 30 minutes before splashing down, the capsule committed to a fiery, 20-minute plunge into Earth’s atmosphere when it shedded its service module in space, exposing a heatshield that reached peak temperatures of nearly 5,000 degrees Fahrenheit (2,760 degrees Celsius) during its blazing-fast descent.

Atmospheric friction slowed the capsule from 24,500 miles per hour (39,400 kph) to 325 mph, followed by two sets of parachutes that helped brake its speed to an expected 20 mph at splashdown. The capsule showed a “perfect” descent rate, Navias said.

The capsule blasted off on November 16 from the Kennedy Space Center at Cape Canaveral, Florida, atop NASA’s towering next-generation Space Launch System (SLS), now the world’s most powerful rocket and the biggest NASA has built since the Saturn V of the Apollo era.

The debut SLS-Orion voyage kicked off Apollo’s successor program, Artemis, aimed at returning astronauts to the lunar surface this decade and establishing a sustainable base there as a stepping stone to future human exploration of Mars.

Mission engineers will spend months examining data from the Artemis I mission. A crewed Artemis II flight around the moon and back could come as early as 2024, followed within a few more years by the program’s first lunar landing of astronauts, one of them a woman, with Artemis III.

Though Orion encountered some unexpected communication blackouts and an electrical issue during its voyage around the moon, NASA has given high marks to the performance of both SLS and Orion so far, boasting that they exceeded the U.S. space agency’s expectations.

“This has been an extraordinarily successful mission,” NASA administrator Bill Nelson told reporters.

By coincidence, the return to Earth of Artemis I unfolded on the 50th anniversary of the Apollo 17 moon landing of Gene Cernan and Harrison Schmitt on Dec. 11, 1972. They were the last of 12 NASA astronauts to walk on the moon during a total of six Apollo missions starting in 1969.

The Artemis program, named after the twin sister of Apollo, marks a major turning point for NASA, redirecting its human spaceflight program beyond low-Earth orbit after decades focused on space shuttles and the ISS.

NASA considered re-entry the single most critical phase of Orion’s journey, testing whether its newly designed heat shield can withstand atmospheric friction and safely protect astronauts that would be on board.

“It is our priority-one objective,” Sarafin said at a briefing last week. “There is no arc-jet or aerothermal facility here on Earth capable of replicating hypersonic re-entry with a heat shield of this size.”

NASA officials have stressed the experimental nature of the Artemis I mission, marking the first launch of the Boeing Co-built SLS and the first combined with Orion, which previously flew a brief two-orbit test launched on a smaller Delta IV rocket in 2014. The capsule was built by Lockheed Martin.

Compared with Apollo, born of the Cold War-era US-Soviet space race, Artemis is more science driven and broad-based, enlisting other countries and commercial partners such as Elon Musk’s SpaceX and the space agencies of Europe, Canada, and Japan.

Orion’s European Space Agency-supplied service module, a housing for its propulsion system that was jettisoned before the capsule’s descent into Earth’s atmosphere, “performed beautifully,” ESA’s mission manager Philippe Deloo said in a statement.

“This is a great day not only for America, but it’s a great day for all of our international partners – that’s the difference from 50 years ago,” Nelson said. – Rappler.com