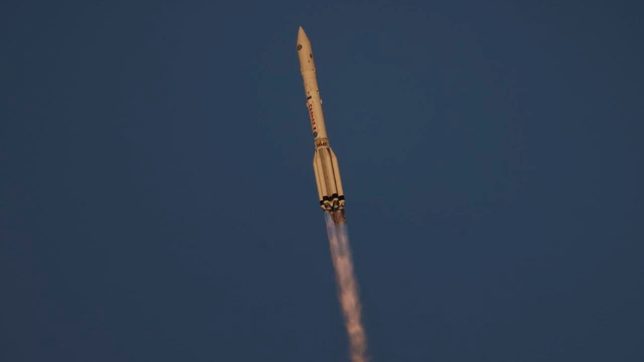 NAUKA. The Proton-M carrier rocket with the Nauka Multipurpose Laboratory Module blasts off to the International Space Station from the launchpad at the Baikonur Cosmodrome, Kazakhstan on July 21, 2021.

Facebook Twitter Copy URL
Copied
Roscosmos says the Nauka module, a multipurpose laboratory named after the Russian word for 'science,' is due to dock with the ISS at 1326 GMT

Russia will enhance its capabilities at the International Space Station when the Nauka module, set to serve as a research lab, storage unit and airlock, docks later on Thursday, July 29, following last week’s launch from the Baikonur Cosmodrome in Kazakhstan.

The module, a multipurpose laboratory named after the Russian word for ‘science’, is due to dock with the ISS at 1326 GMT (9:26 pm, Manila time), Russia’s space agency Roscosmos has said.

Roscosmos head Dmitry Rogozin last month suggested Moscow would withdraw from the ISS in 2025 unless Washington lifted sanctions on the space sector that were hampering Russian satellite launches.

Launched in 1998, the ISS is a multinational project and comprises two segments, a Russian one and another one used by the United States and other space agencies.

“After its commissioning, the Russian segment will receive additional room for arranging workplaces, storing cargo and housing water and oxygen regeneration equipment,” Roscosmos said in a statement on Wednesday.

It said the module performed its final corrective maneuver on Wednesday with no new orbit connections planned before docking. – Rappler.com