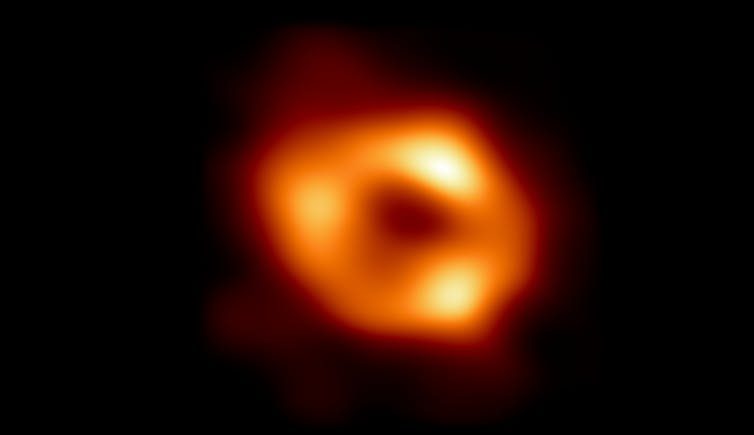 This image shows Sagittarius A*, the black hole at the center of the Milky Way galaxy.

Facebook Twitter Copy URL
Copied
Chris Impey, an astronomer at the University of Arizona, explains how the team got this image and why it is such a big deal

On May 12, 2022, astronomers on the Event Horizon Telescope team released an image of a black hole called Sagittarius A* that lies at the center of the Milky Way galaxy. Chris Impey, an astronomer at the University of Arizona, explains how the team got this image and why it is such a big deal.

Sagittarius A* sits at the the center of our Milky Way galaxy, in the direction of the Sagittarius constellation. For decades, astronomers have been measuring blasts of radio waves from an extremely compact source there.

In the 1980s, two teams of astronomers started tracking the motions of stars near this mysterious source of radio waves. They saw stars whirling around a dark object at speeds up to a third of the speed of light. Their motions suggested that at the center of the Milky Way was a black hole 4 million times the mass of the Sun. Reinhard Genzel and Andrea Ghez later shared the Nobel Prize in Physics for this discovery.

The size of a black hole is defined by its event horizon – a distance from the center of the black hole within which nothing can escape. Scientists had previously been able to calculate that Sagittarius A* is 16 million miles (26 million kilometers) in diameter.

The Milky Way’s black hole is huge compared to the black holes left behind when massive stars die. But astronomers think there are supermassive black holes at the center of nearly all galaxies. Compared to most of these, Sagittarius A* is meager and unremarkable.

2. What does the new image show?

Black holes themselves are completely dark, since nothing, not even light, can escape their gravity. But black holes are surrounded by clouds of gas, and astronomers can measure this gas to infer images of the black holes within. The central dark region in the image is a shadow cast by the black hole onto the gas. The bright ring is the gas itself glowing. The bright spots in the ring show areas of hotter gas that may one day fall into the black hole.

Some of the gas visible in the image is actually behind Sagittarius A*. Light from that gas is being bent by the powerful gravity of the black hole toward Earth. This effect, called gravitational lensing, is a core prediction of general relativity.

3. What went into producing this image?

Supermassive black holes are extremely hard to measure. They are far away and shrouded by the gas and dust that clogs the center of galaxies. They are also relatively small compared to the vastness of space. From where Sagittarius A* sits, 26,000 light years away at the center of the Milky Way, only 1 in 10 billion photons of visible light can reach Earth – most are absorbed by gas in the way. Radio waves pass through gas much more easily than visible light, so astronomers measured the radio emissions from the gas surrounding the black hole. The orange colors in the image are representations of those radio waves.

The team used eight radio telescopes spread across the globe to collect data on the black hole over the course of five nights in 2017. Every night generated so much data that the team couldn’t send it through the internet – they had to ship physical hard drives to where they processed the data.

Because black holes are so hard to see, there is a lot of uncertainty in the data the telescopes collect. To turn it all into an accurate image, team used supercomputers to produce millions of different images, each one a mathematically viable version of the black hole based off the data collected and the laws of physics. They then blended all of these images together to produce the final, beautiful, accurate image. The processing time was equivalent to running 2,000 laptops at full speed for a year.

4. Why is the new image such a big deal?

In 2019, the Event Horizon Telescope team released the first image of a black hole – this one at the center of the galaxy M87. The black hole at the center of this galaxy, named M87*, is a behemoth 2,000 times larger than Sagittarius A* and 7 billion times the mass of the Sun. But because Sagittarius A* is 2,000 times closer to Earth than M87*, the Event Horizon Telescope was able to observe both black holes at a similar resolution – giving astronomers a chance to learn about the universe by comparing the two.

The similarity of the two images is striking because small stars and small galaxies look and behave very differently than large stars or galaxies. Black holes are the only objects in existence that only answer to one law of nature – gravity. And gravity does not care about scale.

5. What scientific questions can this answer?

There is a lot more science to be done from the data the team collected.

One interesting avenue of inquiry stems from the fact that the gas surrounding Sagittarius A* is moving at close to the speed of light. Sagittarius A* is relatively small, and matter trickles into it very slowly – if it were the size of a human, it would consume the mass of a single grain of rice every million years. But by taking many images, it would be possible to watch the flow of matter around and into the black hole in real time. This would allow astrophysicists to study how black holes consume matter and grow.

A picture is worth a thousand words, and this new image has already generated 10 scientific papers. I expect there will be many more to come.

Chris Impey is a University Distinguished Professor of Astronomy at the University of Arizona.

EXPLAINER: What to expect during the green comet’s encounter with Earth