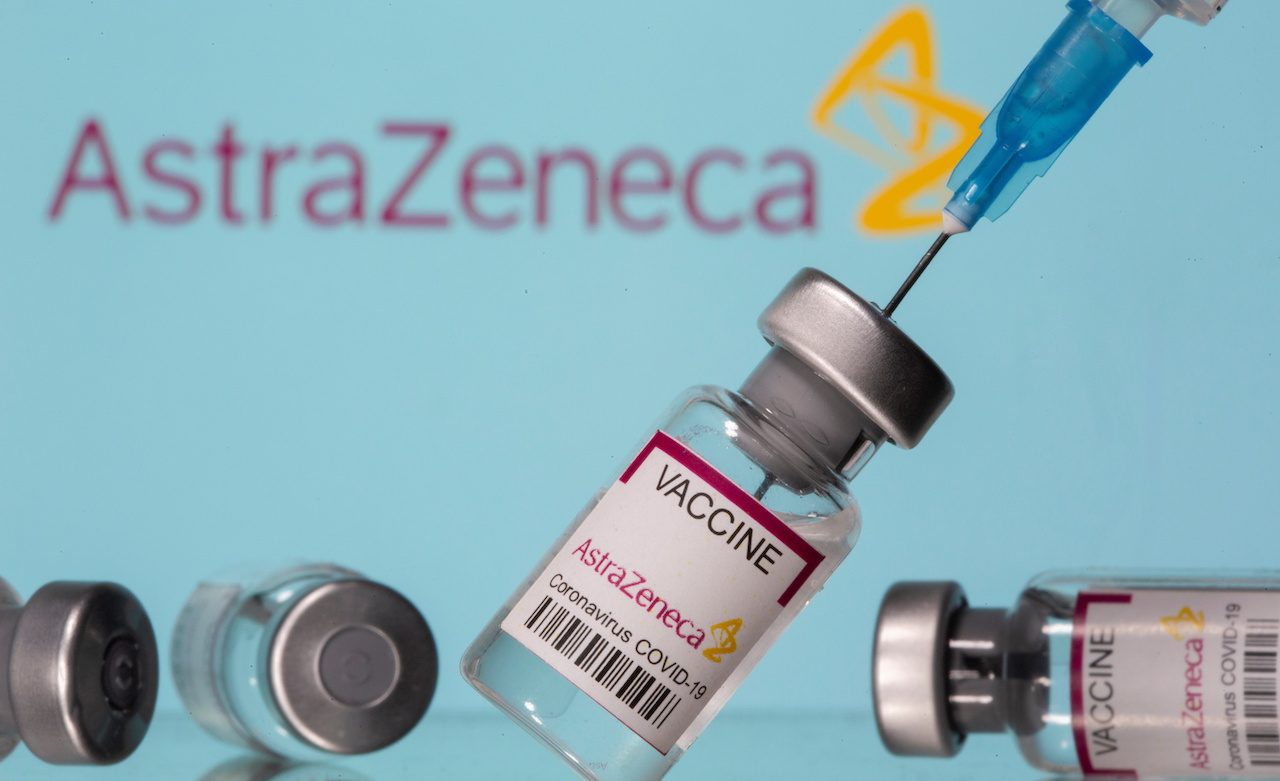 TILT. Vials labeled 'AstraZeneca COVID-19 Coronavirus Vaccine' and a syringe are seen in front of the AstraZeneca logo, in this illustration photo taken March 14, 2021.

Facebook Twitter Copy URL
Copied
Authorities in Ireland, Denmark, Norway, Iceland, and the Netherlands suspend the use of the vaccine over clotting issues

AstraZeneca Plc said on Sunday, March 14, a review of safety data of people vaccinated with its COVID-19 vaccine has shown no evidence of an increased risk of blood clots.

AstraZeneca’s review, which covered more than 17 million people vaccinated in the United Kingdom and European Union, comes after health authorities in some countries suspended the use of its vaccine over clotting issues.

“A careful review of all available safety data of more than 17 million people vaccinated in the European Union and UK with COVID-19 Vaccine AstraZeneca has shown no evidence of an increased risk of pulmonary embolism, deep vein thrombosis, or thrombocytopenia, in any defined age group, gender, batch, or in any particular country,” the company said.

Authorities in Ireland, Denmark, Norway, Iceland, and the Netherlands have suspended the use of the vaccine over clotting issues, while Austria stopped using a batch of AstraZeneca shots last week while investigating a death from coagulation disorders.

“It is most regrettable that countries have stopped vaccination on such ‘precautionary’ grounds: it risks doing real harm to the goal of vaccinating enough people to slow the spread of the virus, and to end the pandemic,” Peter English, a retired British government consultant in communicable disease control, told Reuters. European Medicines Agency has said there is no indication that the events were caused by the vaccination, a view that was echoed by the World Health Organization on Friday.

The drugmaker said 15 events of deep vein thrombosis and 22 events of pulmonary embolism have been reported so far, which is similar across other licensed COVID-19 vaccines.

The company said additional testing has and is being conducted by the company and the European health authorities and none of the re-tests have shown cause for concern. The monthly safety report will be made public on the EMA website in the following week, AstraZeneca said.

The AstraZeneca vaccine, developed in collaboration with Oxford University, has been authorized for use in the European Union and many countries but not yet by US regulators.

The company is preparing to file for US emergency use authorization and is expecting data from its US Phase III trial to be available in the coming weeks. – Rappler.com