Sep 9, 2020 7:56 AM PHT
Agence France-Presse, Agence France-Presse
Facebook Twitter Copy URL
Copied
(UPDATED) A spokesperson for the AstraZeneca vaccine says in a statement that 'we voluntarily paused vaccination to allow review of safety data by an independent committee' 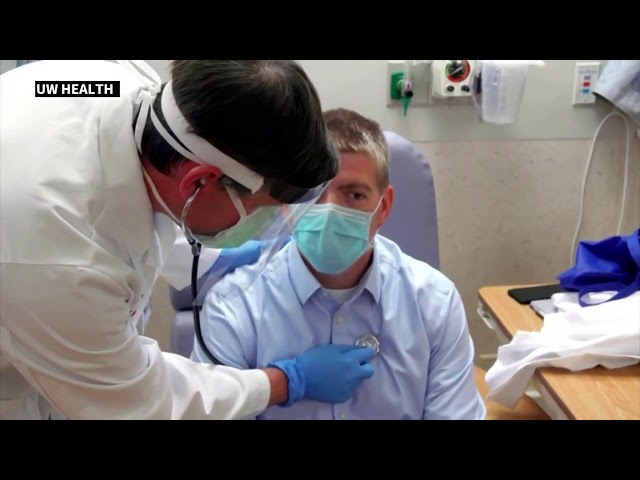 Clinical trials of one of the most advanced experimental COVID-19 vaccines, which is being developed by pharmaceutical company AstraZeneca and Oxford University, were “paused” on Tuesday, September 8, after a volunteer developed an unexplained illness.

With billions of people around the world still suffering from the fallout of the pandemic and the global death toll nearing 900,000, a worldwide race for a vaccine is under way, with nine companies already in late-stage Phase 3 trials.

Worldwide infections to date now stand at more than 27 million, and more than 890,000 people have died from the disease.

Russia has already approved a vaccine, and research published in The Lancet medical journal last week said patients involved in early tests developed antibodies with “no serious adverse events.” But scientists cautioned the trials were too small.

A spokesperson for the AstraZeneca vaccine said in a statement Tuesday that “we voluntarily paused vaccination to allow review of safety data by an independent committee.

“This is a routine action which has to happen whenever there is a potentially unexplained illness in one of the trials, while it is investigated, ensuring we maintain the integrity of the trials.”

The company said that in large trials, illnesses will sometimes happen by chance but must be reviewed independently.

“While this is obviously not great news, remember that fully investigating adverse reactions is a part of large scale trials and essential to ensure trust in any vaccine. It will however mean that results will be delayed,” Harvard epidemiology expert Bill Hanage wrote on Twitter.

According Stat News, the ill vaccine volunteer was likely participating in a Phase 2/3 trial based in the United Kingdom.

China, meanwhile, put its homegrown vaccines on display for the first time at a Beijing trade fair this week, and authorities hope the jabs will be approved for use by the end of the year.

The vaccines are among the handful to have entered Phase 3 trials.

Across Europe, concerns are growing about a resurgence of the virus, with France tightening restrictions, cases in Britain spiking and schools resuming around the region.

In China, however, the virus has been all but banished through lockdowns and travel restrictions earlier in the year that have officials touting the nation as a coronavirus success story.

China’s leaders staged a triumphant ceremony to celebrate beating the coronavirus on Tuesday, with President Xi Jinping stating that China had passed “an extraordinary and historic test” during an awards ceremony for medical professionals.

The nation’s propaganda machine has been attempting to seize the narrative surrounding the pandemic, reframing the episode as an example of the agility and organisation of the Communist leadership.

The economic fallout from the virus continues to wreak havoc on economies around the world, with governments desperate to get back to normality.

India pressed ahead with reopening despite surpassing Brazil on Monday as the second-most infected nation in the world, with more than 4.2 million cases.

South Africa announced its economy had shrunk by more than half in the second quarter, as the pandemic took its toll on Africa’s most industrialised state.

Latin America and the Caribbean surpassed 300,000 virus deaths. Argentina’s caseload surpassed the half-million mark, while in Peru, which has the highest per capita coronavirus death rate in the world, Covid-19 fatalities climbed beyond 30,000.

European countries were battling with high-profile sporting and political fallout from the pandemic on Tuesday.

Tour de France director Christian Prudhomme has tested positive for the illness, prompting French Prime Minister Jean Castex to take a test, officials said, after the pair shared the same car to follow a stage of the cycling event.

France’s football team was forced to take to the field against Croatia on Tuesday without star striker Kylian Mbappe after he tested positive.

The French Open tennis tournament suffered a blow after world number one and defending champion Ashleigh Barty announced she would not take part.

And in the world of politics, one of Europe’s most prominent figures in recent times, Italy’s ex-prime minister Silvio Berlusconi, was still in hospital suffering from the virus.

His doctor, however, was optimistic.