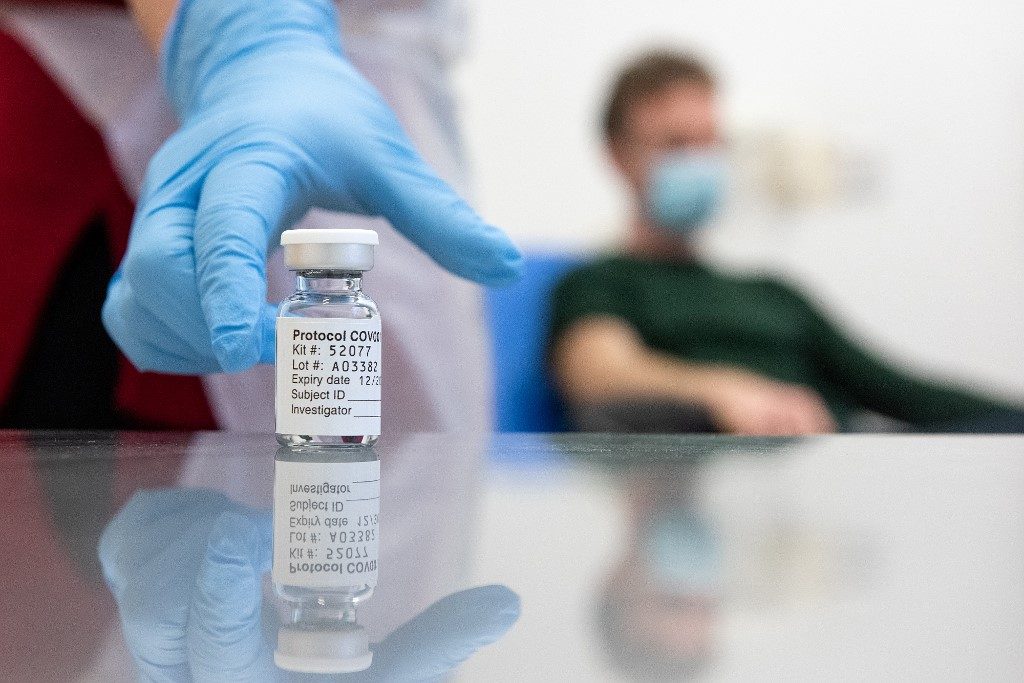 Facebook Twitter Copy URL
Copied
There are high hopes for the AstraZeneca/Oxford vaccine, which the head of the Oxford Vaccine Group, Andrew Pollard, has hailed as a 'vaccine for the world,' given that it could be cheaper to make, and easier to store and distribute

The head of British drug manufacturer AstraZeneca said on Thursday, November 26, further research was needed on its COVID-19 vaccine after questions emerged over the protection it offers, but the additional testing is unlikely to affect regulatory approval in Europe.

AstraZeneca and its partner, the University of Oxford, announced on Monday that it was seeking regulatory approval for the vaccine after it showed an average 70% effectiveness.

That rate jumped to 90% when an initial half-dose then a full dose was given, similar to that in rival vaccines in development by Pfizer/BioNTech and Moderna.

But US scientists have said the higher rate of effectiveness came during tests in people aged 55 and under, and was discovered by accident during the clinical trials.

The head of the Oxford Vaccine Group, Andrew Pollard, said this week that further evidence will be available next month, but the result was still “highly significant.”

“Now that we’ve found what looks like a better efficacy, we have to validate this, so we need to do an additional study,” AstraZeneca chief executive Pascal Soriot told Bloomberg.

He said he expected that to be another “international study but this one could be faster because we know the efficacy is high, so we need a smaller number of patients.”

The additional trial was not likely to delay regulatory approval in Britain and the European Union, Soriot said.

There are high hopes for the AstraZeneca/Oxford vaccine, which Pollard has hailed as a “vaccine for the world,” given that it could be cheaper to make, and easier to store and distribute.

It can be stored, transported, and handled at normal refrigerated conditions of between two and 8 degrees Celsius (36-46 Fahrenheit) for at least 6 months.

Pfizer/BioNTech’s offering requires temperatures of -70C, driving up costs and potentially making it out of reach for lower and middle-income countries.

AstraZeneca/Oxford has also promised to provide its vaccine to the developing world on a non-profit basis.

Why the Oxford AstraZeneca vaccine is now a global game changer The World Health Organization said it looked forward to the full publication of the data from the trial.

“On a review of the detailed data, we will be better positioned to understand the vaccine performance,” it said.

The chief medical officer for England, Chris Whitty, also cautioned against drawing premature conclusions, and urged patience until the data were published in peer-reviewed journals.

“It’s always a mistake to make too many judgments early and in particular before the independent regulator has had a chance to look at the results,” he told a news conference.

Helen Fletcher, professor of immunology at the London School of Hygiene and Tropical Medicine, said the safety data available on the vaccine had been “very robust.”

“It’s possible that a lower initial vaccine dose could result in higher vaccine efficacy…. More is not necessarily better when it comes to vaccines and immunotherapies,” she said.

Fletcher’s colleague, professor of pharmacoepidemiology Stephen Evans, said speculation about the age distribution in the trials was “not useful to anyone.”

“We have good grounds for trusting that the regulation in this high-profile area will be done as carefully or more carefully for these vaccines than for any others in the past,” he said.

Gillies O’Bryan-Tear, from the UK Faculty of Pharmaceutical Medicine, said “the eventual efficacy rate may change,” but “the validity of the low dose/high dose group results are unlikely to be questioned.”

“Even if they (the regulators) decided to ignore the results of the low dose/high dose group, the study of the high dose/high dose patients will still be strongly significant, but I think that it unlikely,” he said.