VACCINE. In this file photo taken on March 18, 2017, a sign for Pfizer is seen on a building in Cambridge, Massachusetts.

Facebook Twitter Copy URL
Copied
Protection in patients was achieved 7 days after the second of two doses, and 28 days after the first, according to preliminary findings 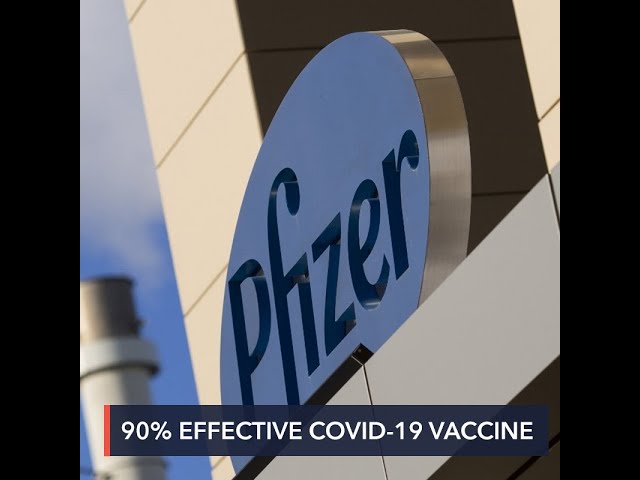 A vaccine jointly developed by Pfizer and BioNTech was 90% effective in preventing COVID-19 infections in ongoing Phase 3 trials, the companies announced Monday, November 9.

The statement was released as coronavirus cases are soaring across the world, and European stock markets and oil prices jumped on the news.

“The first set of results from our Phase 3 COVID-19 vaccine trial provides the initial evidence of our vaccine’s ability to prevent COVID-19,” Pfizer chairman and CEO Albert Bourla said in a statement.

“We are a significant step closer to providing people around the world with a much-needed breakthrough to help bring an end to this global health crisis,” he said.

“We are reaching this critical milestone in our vaccine development program at a time when the world needs it most.”

Across much of the globe, COVID-19 infections rates are hitting record highs, with hospital intensive care units filling up and death tolls mounting.

Based on supply projections, the companies said they expect to supply up to 50 million vaccine doses globally in 2020, and up to 1.3 billion doses in 2021.

US biotech firm Moderna, several state-run Chinese labs, and a European project led by the University of Oxford and AstraZeneca are thought to be closing in on potentially viable vaccines.

Two Russian COVID-19 vaccines have been registered for us even before clinical trials were completed, but have not been widely accepted outside of Russia.

The Phase 3 clinical trial – the final stage – of the new vaccine, BNT162b2, began in late July and has enrolled 43,538 participants to date, 90% of whom have received a second dose of the vaccine candidate as of November 8.

Pfizer said it is gathering two months of safety data following the final dose – a requirement of the US Food and Drug Administration – to qualify for Emergency Use Authorization, which it expects by the third week in November.

“We look forward to sharing additional efficacy and safety data generated from thousands of participants in the coming weeks,” Bourla said.

The so-called messenger RNA, or mRNA, vaccine is a new approach to protecting against viral infection.

Unlike traditional vaccines, which work by training the body to recognize and kill proteins produced by pathogens, mRNA tricks the patient’s immune system to produce viral proteins itself.

The proteins are harmless, but sufficient to provoke a robust immune response.

The study also will evaluate the potential for the vaccine candidate to provide protection against COVID-19 in those who have had prior exposure to SARS-CoV-2, as well as vaccine prevention against severe COVID-19 disease.

Pfizer and BioNTech plan to submit data from the full Phase 3 trial for scientific peer-review publication.

As of mid-October, the World Health Organization (WHO) has identified 42 “candidate vaccines” at the stage of clinical trials, up from 11 in mid-June.

Ten of them were at the most advanced phase 3 stage, in which a vaccine’s effectiveness is tested on a large scale, generally tens of thousands of people across several continents. – Rappler.com