LeBron on PH basketball: ‘They definitely love the game’ 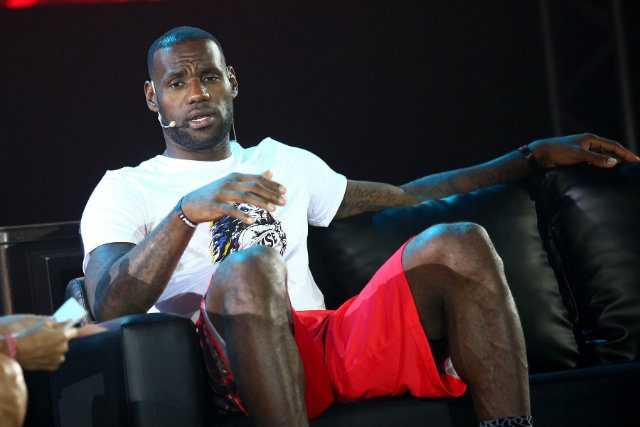 Facebook Twitter Copy URL
Copied
The passion of Philippine basketball fans has not gone unnoticed by 4-time NBA MVP LeBron James, who is in Manila for his second visit

MANILA, Philippines – It took two years before 4-time NBA MVP LeBron James made a second visit to the basketball-crazy country of the Philippines, but the Cleveland Cavaliers superstar still remembers the passion for the game Filipinos displayed when he first came to the country in 2013.

Speaking to the media during a 7-minute press conference on Thursday, August 20, at the Nike House of Rise, James said one impression that lasted with him from his visit two years ago was the “commitment to the game” Filipinos have for basketball.

“They love the game, they play it,” said the 30-year-old future Hall of Famer. “You can tell they’re having fun. You can always relate to some people that’s passionate about the sport. They definitely love the game here.”

James is back in the Philippines for Nike Rise PH, a program that’s looking to discover some of the untapped basketball talents around the country. The two-time NBA Finals MVP is scheduled to play in an exhibition game with kids of the Nike Rise PH program at the MOA Arena on Thursday evening.

James shared that he can relate to the Nike Rise kids, saying “I know exactly what a lot of these kids are going through.”

“I think my story speaks for itself,” shared James, who came from tough upbringings growing up in Akron, Ohio. “I was a kid who did believe that I could make my dreams become a reality and I knew it was going to take a lot of hard work, a lot of sacrifice, and a lot of love.”

“I just love the game so much that I wasn’t going to let nobody tell me that I couldn’t accomplish something,” added James, who’s popularly regarded as the best basketball player in the world today.

James also said that it’s gratifying for him that many aspiring basketball hopefuls look up to him as they blaze their own path. “It feels great to be able to be someone that people look to to be able to accomplish more, to be able to rise to the occasion,” said James, a 12-year NBA pro, who showed he was at the prime of his abilities by carrying the Cavs to the NBA Finals almost single-handedly.

“I just needed some help in my upbringing – people that put me in the position. My mom (Gloria James), who has so much strength and power, to raise me by herself and things of that nature, and all the guidance that I got along the way.”

The game has given James an opportunity to become a worldwide phenomenon.

Aside from his skills on the court, he’s also considered a shrewd businessman, smart investor, and generous philanthropist.

Last week, multiple media outlets reported that the LeBron James Foundation partnered up with University of Akron in Ohio to send close to 2,300 kids to college for free.

“It comes from me having my own childhood and knowing some of the struggles and everyday thing that I went through, and then also having kids of my own,” James, a father of 3, shared about his keenness to helping underprivileged kids attain education. “That definitely has a lot to do with it.” – Rappler.com