CESAFI: UV Green Lancers back on top of standings 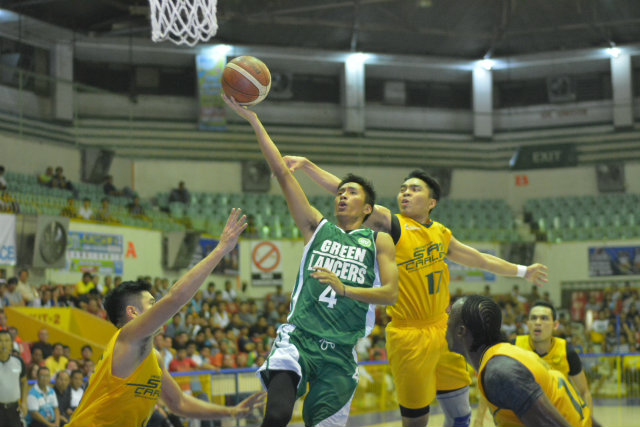 CEBU CITY, Philippines – The University of the Visayas (UV) Green Lancers grabbed the top spot from the University of San Carlos (USC) Warriors after handing the latter their second loss, 74-43, in the ongoing second round of eliminations of the seniors’ division of the 15th CESAFI men’s basketball tournament Sunday, September 20 at the New Cebu Coliseum.

Both teams actually tote the same win-loss record of 9-2 but the 10-time champion UV Green Lancers takes the solo lead by virtue of a simple tie.

The Green Lancers not only wrestled the top spot but also avenged the only loss they suffered at the hands of the Warriors in the first round of eliminations.

Alfred Codilla, whose rainbow shot allowed the Green Lancers to pull away when the Warriors started to cut down on their advantage, was once again named as the best player of the ballgame as he topscored with 18 points and grabbed two rebounds.

The Warriors only had one hoopster scoring in double figures, import Shooster Olago also of Cameroon who finished with 13 points.

Santillan started the scoring spree for the Green Lancers with his back-to-back baskets as soon as the ballgame started.

The Green Lancers immediately went on a rampage to erect a 19-point lead near the close of the first quarter as only Nicolas Kyle Magat, Charles Pepito and Olago connected with the net for the Warriors.

Nothing seemed to work for the Warriors as the Green Lancers continued to widen the gap between them to post a seemingly insurmountable 25-point advantage at the halftime break.

But the 10-minute breaktime only fueled the Green Lancers’ spirit as they pulled ahead by 29 points as soon as the second half started on two baskets from Santilland and Codilla.

Not about to give up, the Warriors started clawing back on the combined efforts of Olago, Giovanni Laguyo and Ian Jefferson Tagapan and managed to stave seven points off the Green Lancers’ lead, 29-51.

The game was interrupted then with Christian Maconocido of the Warriors hitting the floor writhing and favoring his left ankle.

Another drama ensued in the return play as Jerome Napao of the Green Lancers claimed he was punched on the right side of his face. No call was made.

The game finally resumed with the Warriors continuing to hack on the Green Lancers advantage bringing the gap further down to just 20 points, 41-61, on the basket of Caesar Ian Ortega at the 6:35 mark of the final canto.

However, Codilla pulled off a shot from beyond the arc and with Santillan sinking his freebies, the Green Lancers was able to once again pad their lead with 4 minutes remaining in the ballgame.

The Green Lancers posted their biggest lead at 31 points behind the basket of Jayson Balabag inside the last two-minute mark.

The Warriors hopes to recover from their loss when they face the University of Cebu (UC) Webmasters September 22,Tuesday.

UC and the University of San Jose Recoletos (USJR) Jaguars currently share the fourth spot and are in a must win situation to be able to stay in contention.

USJR will go up against the University of Southern Philippines Foundation (USPF) Panthers, who will also be gunning hard one last time for a win as they have yet to post one this season.