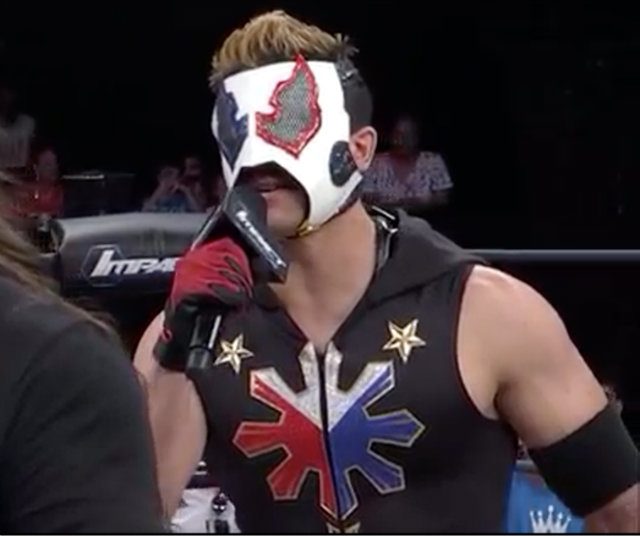 Facebook Twitter Copy URL
Copied
TJ Perkins, who wrestles as Manik on TNA Impact Wrestling, discusses his Filipino roots, the sacrifices he made to become a wrestler, and the importance of just being yourself

MANILA, Philippines – For most of his career, pro wrestler TJ Perkins has performed under a mask. While he’s concealed his face in the ring as a tribute to the lucha libre culture, he’s done nothing to hide his Filipino roots.

Perkins, who currently wrestles for Total Nonstop Action (TNA) as Manik, has for years used his outfits as a canvas to express his Filipino pride. The Los Angeles native wrestled under the name Pinoy Boy early in his career, wearing Filipino flag-inspired pants to perform his trademark Detonation Kick maneuver.

Now Perkins wears the Philippines’ 3 stars and a sun design on his shirt – looking very much like a Filipino super hero – while appearing on TNA Impact Wrestling on the Destination America cable channel.

“It’s always been important for me to represent it and be proud of it,” the former TNA X-Division champion Perkins tells Rappler.

“I guess it’s always been important to me because my family has always been so supportive of me, and being the first one to be born in America…it’s kind of my way to keep myself at home and to represent such a great culture.” Perkins, 31, whose mother hails from Manila, has yet to visit the Philippines but says he grew up with the culture around him. The son of two airlines workers who were constantly traveling, Perkins had a yaya growing up, and spent much time with his grandmother and aunt in LA’s San Fernando Valley.

There Perkins bonded with his Philippine-born family and learned lessons in camaraderie and compassion that have stuck with him along the way.

“We often joke that every Filipino person on Earth is probably related,” said Perkins, who now lives in Las Vegas.

“The typical Filipino greeting is not to ask ‘how you are?,’ but to ask ‘have you eaten?’ Some of the things are unique to how Filipinos care for each other has always been a really inspiring thing to me.”

“Now, especially in TNA with the Manik character, I had some throwback artwork on my attire for the Filipino culture and stuff that’s more representative of me. As much as I can I’m gonna do more of that, and do a better impression of myself,” said Perkins.Much about the characters Perkins has portrayed are based on himself – but with the volume turned up. The art on his wrestling gear has allowed him to express himself even when portraying a masked character.

“Filipino people are very charismatic and joyful and outgoing. I’d like to embrace more of that in myself and show the world that instead of keeping that behind closed doors,” said Perkins.

He was 13 years old when he began applying for wrestling schools, writing letters to schools that wouldn’t accept students below age 18 or 21. Perkins lucked out when he found a lucha libre school in LA that would accept him.

“A lot of them are unregulated which is maybe dangerous for me but good thing for me they allowed me to start,” said Perkins.

“When I first started I worked hard and did a lot of difficult things because I was young. I would have to ditch schools to make shows. My family wouldn’t know where I would disappear to from a Thursday or a Friday to Monday morning.”

He began on small independent shows in California and Mexico to becoming the youngest non-Japanese wrestler in New Japan Pro Wrestling at age 18. His career took off quick: He traveled regularly while wrestling for major promotions, shared the ring with future stars CM Punk, the Young Bucks and Bryan Danielson (popularly known as Daniel Bryan),  and spent a short while in Florida Championship Wrestling, a developmental territory of World Wrestling Entertainment.

Success came early and easy for Perkins, until the day it didn’t. He found himself homeless for a time in Florida after a career gamble failed to pay off.

“I chose to leave home again and all the other times I left home and you don’t really realize how precarious that things can be and how delicate your career, your life and your plans are,” said Perkins.

“Now that I was getting older and I was away from home and I wasn’t a kid anymore, I ended up losing a lot, had to basically start my career over. I ended up homeless and was on the street.

“It’s kind of like God gave me a second chance and said ‘You had it easy the first time around, so now you’re gonna have to earn it all back and it’s gonna be totally different.’”

Perkins bounced back and found a permanent home with TNA, a company he had performed sporadically for before signing full-time with the company in 2013. He won the TNA X-Division title that year, defeating Sonjay Dutt and Marasciulo in an Ultimate X match.

Of all the advice Perkins has received along the way, Perkins says it was the words of WWE developmental trainer Norman Smiley that provided the best perspective for him. 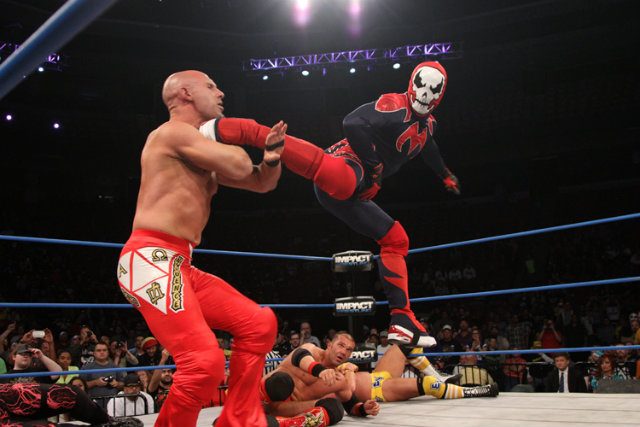 “He said that the only thing that’s real is the money and the miles. And it’s just such a universal thought, you can apply it to so many things no matter what walk of life you come from. In the process of trying to teach myself what a career is and how to be a better man, especially at that time, it was something that really kept me grounding and how to prioritize everything.”

When asked what advice he had for aspiring young wrestlers, Perkins said Nike got it right when they said “Just do it.”

“I think that it’s important to not be afraid and to take the road that you want and to not hang your expectations and your goals on the expectations and opinions of others,” Perkins says. “To always be prepared to accept that you’re gonna hear about the worst possible things that could happen and to expect that each of those things probably will happen.

“For me, that’s exactly what happened. Every horror story I ever heard, you never expect that you’ll see them all, you might expect maybe to see one or two. I ended up going through all of them. But the important thing is you need to expect to deal with all those things because if you’re prepared and if you keep your faith and you’re not afraid then great things can happen. everyone is tested but if you really want it.”

The mixture of experience and youth that have served Perkins well all these years continues to pay dividends. After more than a year with the James Storm-led heel faction The Revolution, Perkins broke free and unmasked for the first time since adopting the Manik character in a segment that drew praise from the wrestling world.

At TNA’s Bound for Glory pay-per-view on Sunday, October 4, Perkins wrestled maskless as TJP – though he was still billed as Manik – alongside Andrew Everett, Tigre Uno and fellow Fil-Am DJ Z in an Ultimate X match for the X-Division title.

Though Tigre Uno eventually retained the title, Perkins showed he could be just as charismatic without a mask in a spot where he mocked DJ Z’s footwear (After falling from the high wire Perkins pointed to DJ Z’s shoes and yelled “What are those?!”). That was Perkins – an avid sneaker head who wrestles in Kobe 9s – just being himself.

Perkins said through his Twitter account that the mask is likely to return at that request of TNA management. A hashtag campaign (#AllWeWantIsTJP) suggests he’s having a good time being TJ Perkins. Mask or not, he’s going to find a way to enjoy himself while entertaining the crowds.

It’s in keeping with his best piece of advice for young wrestlers: “If you really need to breathe, then you’ll find a way to breathe. That’s the best way I can say it.” – Rappler.com