Feb 3, 2016 2:22 PM PHT
Rick Olivares
Facebook Twitter Copy URL
Copied
Boxing, athletics, and taekwondo are among the sports that will most likely have Philippine representation in Rio 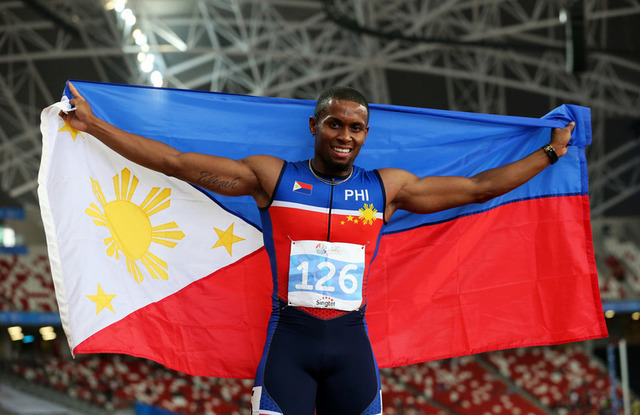 MANILA, Philippines – Philippine Olympic Committee (POC) first vice president and spokesman Jose “Joey” Romasanta bared that the country will most likely send a bigger delegation to the 2016 Olympics in Rio de Janeiro than the contingent sent to the 2012 Olympics in London.

“We had 11 competitors in 8 different sports in London,” Romasanta said. “This time, for Rio, Brazil, we could send about 15, 16 competitors. Hopefully, a few more. If Gilas Pilipinas makes it that would be very good for us. But in the overall count, you count a team as one, not in the physical numerical number of athletes.”

The long-time Philippine sports official cited sports that will most likely have representation when the Rio Olympic Games open on August 5.

“There’s boxing, athletics, taekwondo, golf, shooting, weightlifting, and cycling where we have a strong chance,” he pointed out. “There are the basketball qualifiers that have yet to be played. It’s not easy but there’s a chance we could make it.”

The POC official cited a couple of athletes who are shoo-ins to make the delegation.

“There’s Eric Cray for athletics; he’s the only who has qualified. [Weightlifter] Hidilyn Diaz, who has had a string of very good performances, is said to have qualified but we are waiting for official confirmation. We’re hoping in the next few weeks and months, we will learn who else from our pool of aspirants will make it.”

Cray is a 27-year-old from Olongapo City, Zambales who holds dual American and Filipino citizenship but chose to represent the Philippines.

He competes in sprinting and hurdles events, where he holds the national and Southeast Asian Games record for 400-meter hurdles (49.40 seconds) and the 100-meter dash. He has two gold medals from the 2013 and 2015 SEA Games.

The 24-year-old Diaz, meanwhile, hails from Zamboanga City. She represented the country in the 2008 Summer Games in Beijing, where she competed in the women’s 58-kilogram category.

She previously bagged a pair of gold medals, as well as a silver in Asian Youth competition and a bronze medal in the 2007 SEA Games in Thailand.

Romasanta said there are at least 51 aspirants from many different sports still in the process of qualifying in competitions all over the world.

“That depends on how they perform in their respective qualifiers. We always hope for more but in this case we have to be a little more pragmatic. You don’t want to over-promise and not deliver because you will set up a lot of people for disappointment,” he added.

Rio will be the Philippines’ 21st participation in the Summer Olympics. The one time the country did not participate was when it joined the United States-led boycott of the 1980 Moscow Games.

The Philippines has not won an Olympic medal since boxer Mansueto “Onyok” Velasco brought home a silver medal in the light flyweight competition from the 1996 Atlanta Games.

“You always hope for the best,” said Romasanta of the country’s medal chances. – Rappler.com