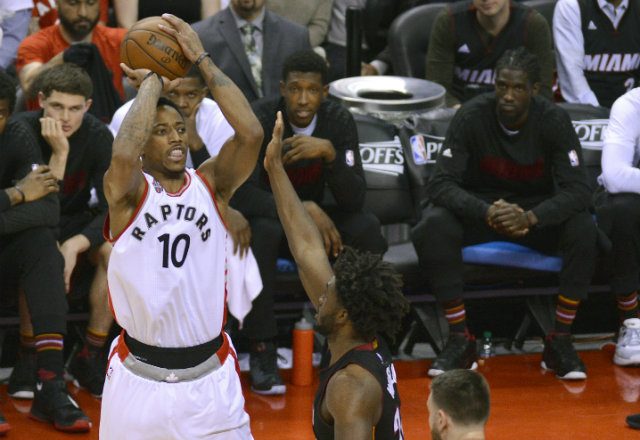 OTTAWA, Canada – DeMar DeRozan tallied 34 points as the Toronto Raptors seized a 3-2 lead in their Eastern Conference series with a 99-91 win over the Miami Heat on Wednesday, May 11 (Thursday Manila time).

Toronto guard Kyle Lowry scored 25 points, including 5 in the final minute as the Raptors fended off a late Miami surge.

The Raptors started quickly and led by as many as 16 points in the first quarter and were ahead by 20 in the second quarter before the Heat mounted their attack.

The Raptors took a 13-point lead into the fourth quarter, but the Heat cut it to five with just under 5 minutes remaining at Toronto’s Air Canada Centre arena.

The margin was down to one after Dwyane Wade converted two free throws with just under two minutes to play. Wade finished with a team high 20 points for the Heat.

DeRozan made two free throws with 1:33 left, and Toronto led by 3 points.

DeRozan also made two free throws with 21 seconds left and made two more with nine seconds remaining to increase the lead to eight points and clinch the win.

Goran Dragic and Josh Richardson each scored 13 points for the Heat, and Joe Johnson added 11 points and 8 rebounds. – Rappler.com