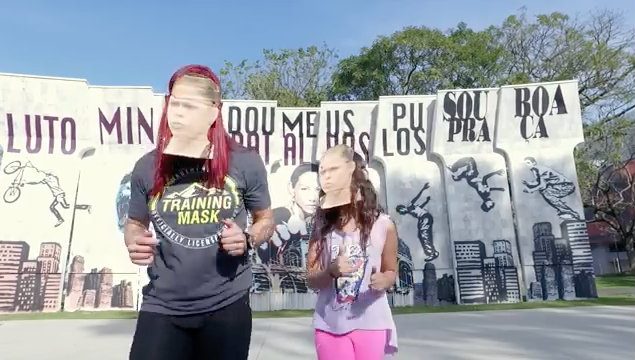 MANILA, Philippines – Cris Cyborg knows how to use a popular viral craze to call out her rival.

The mixed martial arts fighter whose real name is Cristiane Justino put her own spin on The Running Man Challenge, donning a Ronda Rousey mask to call out the former UFC featherweight champ for a showdown at UFC 205, which takes place November 12 at Madison Square Garden in New York City.

The fight card will be UFC’s first in the Empire State since 1995, after which the sport was banned from 1997 until this past March, when a bill was passed to drop the ban in the state.

The Invicta featherweight champion Cyborg made her UFC debut earlier in May, blasting out Leslie Smith in 81 seconds at UFC 198 in her home country of Brazil. The 30-year-old Cyborg took to Facebook shortly after to call out Rousey, the biggest star in female combat sports and a former bantamweight champ, telling her “Hey Ronda Rousey, you running all the way to New York? Don’t be scared, homie.”

Cyborg’s fighting prowess is unquestionable. As for her dancing skills? It’s a good thing she had a friend next to her to help. – Rappler.com