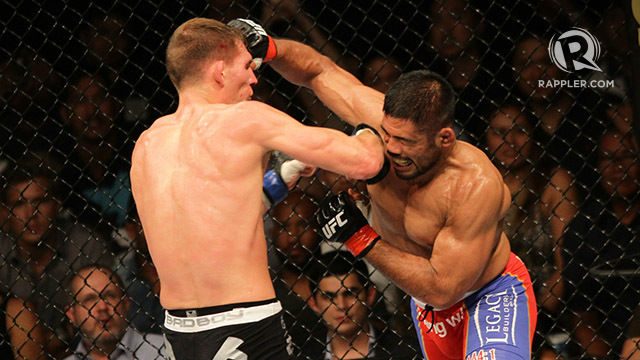 Facebook Twitter Copy URL
Copied
As a lead up to the UFC 200 pay-per-view event, the promotion has complied a list of fighters who carved a significant niche in the league

MANILA, Philippines – Retired Filipino-American stalwart Mark Muñoz has been recognized by the Ultimate Fighting Championship as one of the organization’s 200 greatest fighters of all time.

As a lead up to the UFC 200 pay-per-view event on July 9, the promotion has complied a list of fighters who carved a significant niche in the league.

Determined by a panel of experts and the overall consensus of UFC fans, the partial results were revealed through a special 6-part countdown series that began on Thursday, June 2.

The 38-year-old native of Mission Viejo, California had a 6-year tenure in the world’s premier mixed martial arts (MMA) company and managed to land on the No. 179 spot of the rankings.

.@mark_munoz makes it to the Top 200 greatest UFC fighters. He occupies the No. 179 spot. #UFC200 pic.twitter.com/tJfsEN2Nhv

Countless MMA competitors have tried to conclude their prizefighting runs on a high note, but most failed dismally.

Mark Muñoz is one of the few who managed to execute a storybook epilogue to his professional career triumphantly.

(READ: Mark Muñoz goes out on his own terms)

“The Filipino Wrecking Machine” turned back the clock to dominate young English middleweight Luke Barnatt in his farewell fight at UFC Fight Night 66 in May 2015.

Although he was coming off 3-straight stoppage setbacks, Muñoz returned to top physical form as he overpowered Barnatt over 3 rounds to sweep the judges’ sheets with the scores of 30-27, 29-28 and 30-27.

Muñoz overwhelmed Barnatt from start to finish with repetitive takedowns and solid overhand rights to negate the length and height leverage.

The pro-Muñoz crowd at Pasay City’s SM Mall of Asia Arena erupted in the dying seconds of the third round when he scored a single-leg takedown and concluded it with his signature “Donkey Kong” ground-and-pound.

Muñoz left his gloves at the center of the Octagon as his sendoff gesture and delivered a heartfelt speech in his post-fight interview.

“This is something I dreamed about and I hoped for,” Muñoz said. “I know I didn’t accomplish what I wanted to accomplish in the cage, but I invested a lot of my time in lives. I’ve been able to help change lives and impact lives in a positive way. That’s what I’m here for.” – Rappler.com