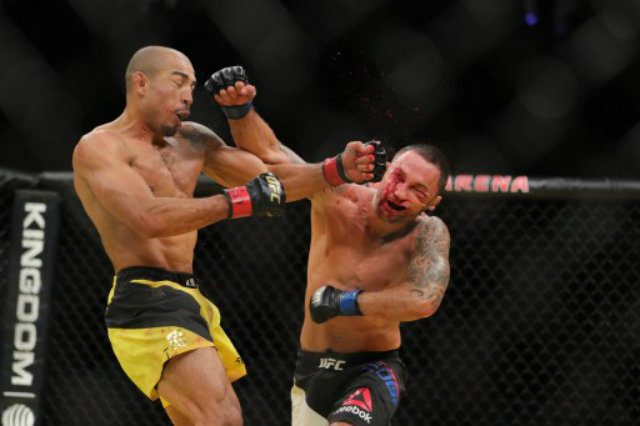 Despite the intense work rate of Edgar, Aldo left no doubts in his rematch with the former lightweight titleholder as he grinded out a convincing unanimous decision win with the scores of 49-46, 49-46 and 48-47.

With the shutout victory over Edgar, Aldo improves his professional record to 26-2 and gets his hand raised in triumph for the first time since being knocked out by McGregor in 13 seconds last December.

Aldo has the interim UFC featherweight title in his possession, which gives him the right to set a date with McGregor later this year and avenge his setback.

On the other hand, Edgar snaps his 5-fight winning streak and downgrades to a 20-5-1 mixed martial arts slate.

In the other match-up on the UFC 200 main card, former heavyweight champion Cain Velasquez (14-2) sent an astounding statement to the entire 265-pound weight class as he appears to be next in line for a title shot by stopping Travis Browne (18-4) with a first-round technical knockout.

Velasquez wobbled Browne early with a wheel-kick and then dropped him with a looping right hand, giving the Mexican-American an opening to rain down heavy blows on the ground to coerce referee “Big” John McCarthy to halt the contest at 4:57 of the first round. – Rappler.com