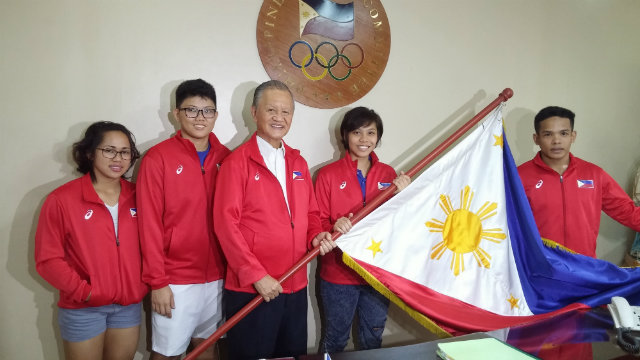 MANILA, Philippines – Ian Lariba will carry the Philippine flag during the parade of athletes in the opening ceremony for the 2016 Rio Olympics.

“First of all, she (Lariba) competes in a very tough sport that is dominated by the Chinese and the Koreans,” explained Cojuangco.

“I think that Ms Lariba has a chance to compete for a medal because she’s hurdled her sport’s qualifiers that already features a very tough field. Of course, you have the best already in the Olympics but I have the utmost confidence in her.

“And second, she is one of our few young athletes who will be making her first appearance in the Olympics. Among our young athletes, she’s most qualified.”

The Cagayan De Oro City native was surprised that she was named as the flag bearer.

“I was surprised when Mr. (Joey) Romasanta called me into a room (before the press briefing) regarding this,” related the 23-year old Lariba. “I didn’t know what to say. I was groping for words. I hoped that Mr Romasanta didn’t think I was ungrateful. But when I found the courage to talk, I could only say, ‘Thank you.’ But it is an honor.”

“I am still trying to process being flag bearer,” added Lariba.

“I am already having difficulty containing my excitement about going to the Olympics. This is the dream of every athlete. And now, I’ll be with the Philippine delegation carrying the flag. It’s a dream come true and a once-but-not-in-everyone’s-lifetime-experience.”

Lariba begins her Olympic competition in the preliminary round for table tennis on the 6th of August at 9am. – Rappler.com