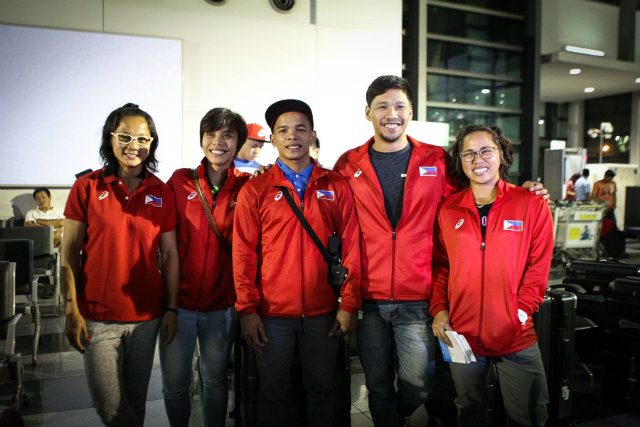 RIO DE JANEIRO, Brazil – Members of the Philippine team, including 6 of the 12 athletes who qualified for the Rio Olympics, arrived safe and sound in Rio de Janeiro, brazil Saturday, July 23 afternoon following a back-breaking journey from Manila.

Flag-bearer Ian Lariba of table tennis led the small batch of Pinoy athletes who flew in after an 8-hour flight from Manila to Dubai, a 3-hour stopover and then a 14-hour trip to Rio.

It was a tiring 25-hour journey that can turn any ordinary person upside down.

Joining the trip were athletes Elaine Alora of taekwondo, Jessie Khing Lacuna of swimming, Marestella Torres-Sunang of track and field, and Hidilyn Diaz and Nestor Colonia of weightlifting.

Diaz and Torres are in their third straight Olympics while Lacuna is in his second stint in the Summer Games.

The rest of the Filipino qualifiers will arrive in Rio in the coming days. They are boxers Rogen Ladon and Charly Suarez, who are training in the United States; runner Eric Cray, who’s in Houston; swimmer Jasmine Alkhaldi, who’s flying in from Hawaii; marathoner Mary Joy Tabal, who’s still in Japan; and golfer Miguel Tabuena, still competing this week in the King’s Cup in Thailand.

From the airport, the Filipinos joined fellow delegates from Malaysia, Hong Kong and Uganda on a one-hour bus ride to the sprawling Athletes Village, a collection of high-rise condominiums with units that can fit as many as 7 to 8 persons.

This early, there are signs of poor construction, with leaking pipes and low water pressure, especially for those staying in the higher floors, and beds that may be too small and less comfortable for some athletes.

The Filipinos are on the 11th floor of Building 2.

Romasanta said the issue will certainly be brought up during Sundaymorning’s DRM (delegations registration meeting) and another one among the CDMs (chef-de-mission) of the 206 participating countries.

“The organizers will hear it from some delegates,” he said.

From the airport, the presence of security forces along the main roads cannot escape one’s eyes. Military personnel in fatigue uniforms and heavily armed secure the main streets.

There is very strong police visibility days before the August 5 opening of the Summer Games, which is facing security threats, peace and order problems and the dreaded Zika virus.

All the delegates, including the more than 10,000 athletes and officials, have been briefed by their respective NOCs (National Olympic Committees) regarding these threats.

Despite jetlag, the Filipino athletes are expected to break sweat Sunday, their first full day in this city of around 6 million.

Alora, who will not see action until Aug 20, or the eve of the closing ceremony, can’t wait to don her training uniform.

“We will train tomorrow,” said Alora.

Seeing action the day after the opening ceremony are Lariba, Ladon, Squarez and Lacuna, each one hoping to win a medal or move on to the succeeding rounds. – pool report by Abac Cordero/Rappler.com