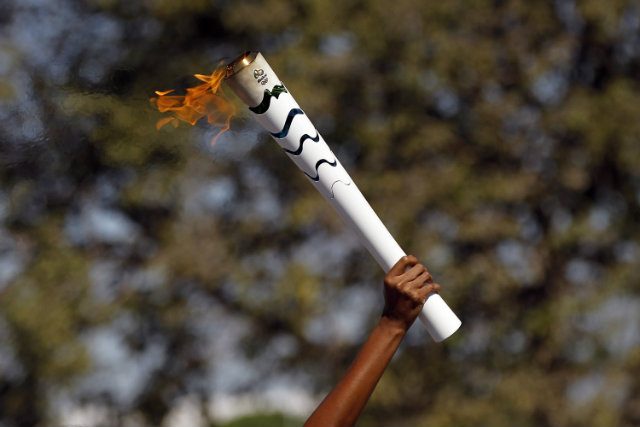 RIO DE JANEIRO, Brazil – A riot during the Olympic torch relay cast a shadow over the Rio Games starting in just over a week Thursday, July 28 marking a new low in a ritual that had been meant to unite Brazil.

The torch is nearing the end of a 300-city relay that will end with the lighting of the Olympic flame in the Maracana stadium at the opening ceremony on August 5.

But while organizers portray the epic journey as a chance to ignite public enthusiasm, repeated security incidents have turned the torch into a symbol of the organizational glitches and social discontent overshadowing South America’s first Olympics.

Video broadcast on Globo television and amateur footage shared on social media showed a dense crowd cheering while someone shouted “the torch has been put out!”

The torch bearer, accompanied by police, is seen retreating to a bus, with the relay apparently halted. In other scenes, police fire rubber bullets and tear gas as the crowd runs and gathers again to confront officers.

This came after repeated attempts in other cities to douse the torch with fire extinguishers or buckets of water.

Highlight reels of other torch mishaps have gone viral online, including runners falling over, a police motorbike crashing into the parade, a man attempting to seize the torch, and political protests.

In June, a rare, captive jaguar – the same animal chosen for Brazil’s Olympic mascot – was shot dead after escaping handlers at a torch ceremony.

There was better news for Rio organizers in the arrival overnight of Jamaica’s Olympic sprint superstar Usain Bolt, who hopes to defend his multiple gold medals.

Wearing a black tracksuit with white stripes, sunglasses and headphones, Bolt was in a hurry to leave the airport. “I didn’t sleep on the flight,” he told a welcoming committee of journalists and officials.

A more controversial set of arrivals were expected later in the day, with some 70 Russian athletes due to fly in at around 6 pm, their team slashed by bans in a scandal over state-sponsored doping.

Rio organizers were also still racing to complete emergency repairs to the athletes’ Village, where some 19,000 team members will live.

Half of the buildings had problems ranging from blocked toilets to faulty wiring when teams began moving in over the weekend.

Although these glitches were expected to be ironed out by the end of Thursday, new controversy was brewing over allegations by government labor inspectors that the approximately 600 workers are being made to work nearly around the clock without legal contracts.

Brazilian media reports said Thursday that another man in an apparently separate case has been detained on suspicion of terrorism links.

His lawyer, Edson Ferreira, said the allegations lacked substance. “There is no basic accusation, or complete accusation,” he told Globo television.

“There’s nothing more than suspicions that he put posts on Facebook, that he posted links related to Islamic State, but which have nothing concretely to do with him. He has no link with Islamic State,” the lawyer said.

Brazilian officials have downplayed the seriousness of the group arrested last week, calling them “amateur” and “disorganized.”

Members of the group are accused of discussing potential attacks, attempting to buy a rifle online, and declaring allegiance to the Islamic State group via the internet. – Rappler.com