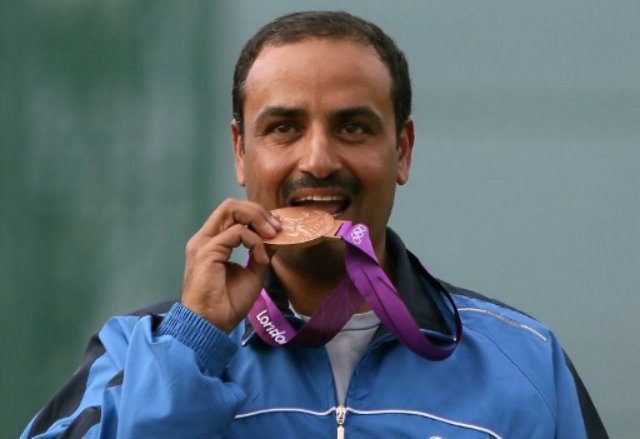 Facebook Twitter Copy URL
Copied
With Kuwait banned from the Rio Olympics, legendary shooter Fehaid al-Deehani has made a stand against carrying the neutral team flag

Kuwait is suspended by the International Olympic Committee (IOC) and other leading federations such as FIFA, football’s world body, over government interference in sport.

Despite last-minute calls for dialogue to get the Kuwait government to make a concession, al-Deehani, winner of Kuwait’s only Olympic medals, and 7 other athletes are resigned to having to compete in Rio as so-called Independent Olympic Athletes.

According to Kuwaiti media, the IOC asked al-Deehani, who took trap shooting bronze medals at the 2000 Sydney and 2012 London Games, to carry the Olympic neutral team flag.

But the Kuwait army officer turned down the request.

“I am a military man and I will only carry the Kuwait flag,” he said. “I cannot carry the IOC flag.”

The IOC and FIFA have now suspended Kuwait 3 times since 2007 over government interference.

The latest dispute has caused anguish across the Gulf state, pitting the government even against global sporting powerbroker Sheikh Ahmad Al-Fahad Al-Sabah, a member of the IOC and FIFA, who is from Kuwait.

The government has launched court action in Switzerland seeking $1 billion in damages from the IOC over its suspension, which Youth and Information Minister Sheikh Salman al-Humoud al-Sabah has called “unjustifiable”.

The Court of Arbitration for Sport has already ruled against the government, and a UN envoy’s efforts to mediate have also come to nothing.

The Kuwait parliament amended its controversial sports law in June, but the government still has the power to dissolve sports associations and federations.

The Kuwait Olympic Committee on Sunday called on the government to start dialogue in a last-gasp bid to get the Kuwait flag in to the Rio opening ceremony.

Hussein al-Mussallam, vice chairman of the committee’s legal and international relations commission, told AFP it was time “to sit down together and review things in a positive way”.

He said “the interests of Kuwaiti athletes should come above all else”.

“I am speaking on behalf of the KOC and not in the name of international organizations,” al-Mussallam added.

“The time has come in front of everyone, the Kuwaiti government and the ministry for youth and sports, the Kuwait Olympic Committee and the Olympic Movement Kuwait to sit together for the national interest and for Kuwait to return as it was.”

Al-Mussallam also appealed for all sides to “stay away from personal issues”.

The official said that Kuwaiti athletes want to compete in Rio “under the flag of our country, so and we demand the sports minister respond to the advice of the International Olympic Committee and to stop the implementation of the conflicting articles in the Kuwaiti sports law”.

Al-Deehani is one of 6 Kuwaiti shooters in the Kuwait delegation in the neutral athletes. The others are Saud Habib al-Kandari, Abdul Rahman Fayhan, Khaled Al-Mudhaf, Ahmad al-Afasy and Abdallah al-Toraqi.

Fencer Abdulaziz Al-Shatti and swimmer Abbas Al Qali make up the 8 waiting for an end to the battle. – Rappler.com