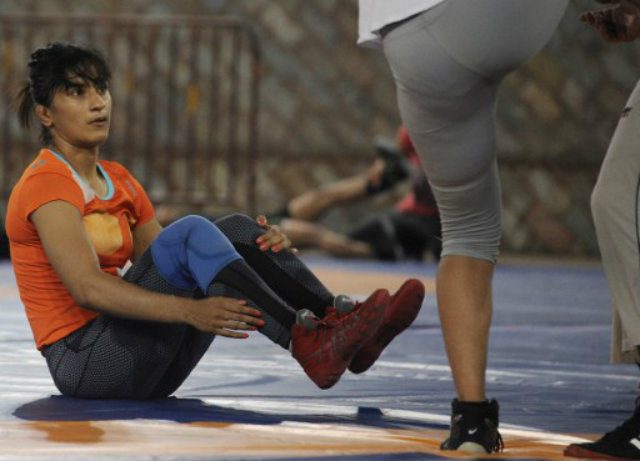 LUCKNOW, India – Pinning her opponent in a merciless half-nelson, women’s wrestler Vinesh Phogat hones her skills for the Rio Olympics – where, win or lose, she has already scored a significant victory over sexism in one of India’s most conservative states.

Vinesh, her cousin Babita and their teammate Sakshi Malik have all qualified for Rio despite hailing from Haryana, where women have long been treated as second-class citizens and “honor killings” and sex-selective abortions are rife.

Vinesh and Sakshi recall villagers sniggering and finger-pointing when they wrestled with boys or wore shorts in a state where women are usually covered head-to-toe and confined to their homes.

“People would throw us dirty looks when we wore shorts to practise. They would gossip and… say ‘this is wrong’,” said 21-year-old Vinesh, who comes from a prestigious wrestling family, at a stadium in the northern city of Lucknow.

Marriage outside caste or religion brings punishment including “honor killings” – murder, usually of the woman, for dishonoring her family – while sex-selective abortions still occur in an area that values boys above girls.

Haryana has the worst sex ratio in the country, with 877 women for every 1,000 men, against the national figure of 940, according to the last official census of 2011.

Locals used to berate Sakshi’s parents when she was growing up, warning that their daughter would develop puffed-out cauliflower ears, common among wrestlers, and become undesirable to potential husbands.

“It hurt a little and I wondered why people said such mean things, especially when I was so young, and made me doubt myself,” said the 23-year-old, who began training when she was 12.

Thrashed with a stick

They believe, however, that attitudes started to shift after Geeta Phogat – Babita’s elder sister – won gold at the 2010 Commonwealth Games and became the first Indian woman wrestler to qualify for an Olympics two years later.

The Phogat women credit their success to their ex-wrestler father and uncle, Mahavir Singh Phogat, who was determined to make them tougher than any of their male counterparts.

“He didn’t thrash the boys as much as he thrashed us because he always said ‘it’s not as if you are weaker than them’,” said Vinesh, Mahavir’s niece, remembering his ruthless training with a stick in hand.

While other parents were grooming their daughters for marriage, Mahavir wanted more for his girls and believed they could succeed at kushti, the traditional Indian wrestling which is popular among men in Haryana.

“It wasn’t easy given Haryana’s culture. Villagers shamed me and disowned me. Even my own parents criticized me every day,” said Mahavir, an acclaimed amateur wrestler, whose coaching career has become the subject of a Bollywood film to be released this year.

“I used to get so angry listening to all the nonsense. But I ignored all of it because I knew I had to prove everyone wrong. I knew I had to show people what women can do,” he told AFP.

Like the Phogats – now the toast of their hometown of Bilali – Sakshi, who trained under a different coach, has also become a local celebrity after winning silver at the 2014 Commonwealth Games.

“It’s so weird to see how people can change so suddenly, how they take interest in me now that I’m rising to the top, yet didn’t support me when I was starting out,” Sakshi said of villagers who are now flocking to take selfies and feed her sweets.

All of the women now train in the national squad, flying around the world for competitions. But Sakshi and Vinesh agree that had their families not strongly backed their dreams, they would probably be married with children by now and with no prospect of a career in sports.

“My life is very special compared to my friends’. Some of them study a bit and then do household chores. The married ones are busy taking care of their husbands and babies,” said Sakshi, who also may tie the knot next year but whose “game comes first” right now.

For Vinesh, marriage is the last thing on her mind.

Sitting in her messy dorm room and cuddling her teddy bears, she talks about how she will miss home-cooked food in Rio, where she hopes to win gold and take Indian women’s wrestling to new heights.

But just as important is the prospect of wearing a saree at the August 5 opening ceremony.

“It feels good to go to the opening ceremony, see our flag flying high and have fun walking in a saree,” Vinesh said enthusiastically, her hot pink nails contrasting with her broad, muscular build.

“We usually never get to wear sarees or other girly stuff.” – Annie Banerji, Agence France-Presse/Rappler.com