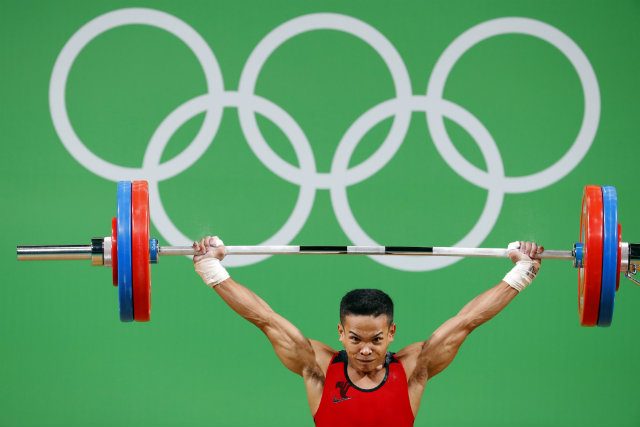 MANILA, Philippines (UPDATED) – Nestor Colonia was unable to give the Philippines a second Olympic medal after falling short in the men’s 56-kg weightlifting event of the 2016 Summer Olympics on Sunday, August 7 (Monday morning, August 8 in Manila) in Rio de Janeiro, Brazil.

Colonia, 24, totaled just 120 kg in his weight class from only the snatch after he failed to get a lift up in the clean and jerk.

Colonia had two unsuccessful snatch attempts and it carried over to the clean and jerk, where he attempted to lift 154 kg.

In his second attempt, the first-time Olympian Colonia managed to bring the barbell overhead but he could not steady himself enough for it to count.

Colonia was a bronze medalist in the 2015 World Weightlifting Championships and a gold winner in the Asian championships.

China’s Long Qingquan claimed the gold with a 307-kg total lift while North Korea’s OM Yun Chol clinched the silver with a 303-kg lift in a tight competition that went down the wire to the very last attempts. Thailand’s Sinphet Kruaithong took the silver with his 289-kg tally.

Earlier, fellow lifter Hidilyn Diaz, who was supporting Colonia from the sidelines, succeeded in ending the Philippines’ 20-year medal drought with a silver in the women’s 53-kg event. – Rappler.com