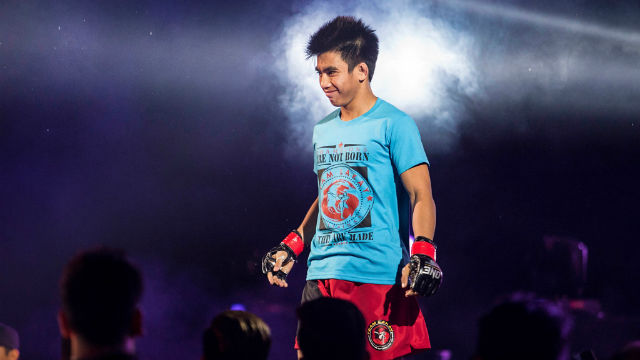 MANILA, Philippines (FOURTH UPDATE) – Eduard Folayang made his case for a ONE Championship lightweight title shot with resounding clarity as he defeated Adrian Pang of Australia via unanimous decision in the co-headliner of the “Heroes of the World” event on Saturday, August 13 at the Venetian Hotel’s Cotai Arena in Macau, China.

Earlier on the card, ONE Championship featherweight titleholder Honorio Banario validated his rightful place in the organization’s lightweight bracket as he scored a razor-thin decision victory over Hong Kong’s Eddie Ng on the undercard of the “Heroes of the World” event on Saturday, August 13.

The 26-year-old native of Mankayan, Benguet walked out of the Cotai Arena with a close unanimous decision win and secured a his second-straight triumph as a lightweight.

Also, highly-touted Pinoy prospect Joshua Pacio made a lasting impression in his first overseas bout as he made quick work of Thailand’s Kritsada Kongsrichai in a 3-round strawweight contest.

Compatriot Jimmy Yabo wasn’t as lucky as he lost to Ma Jia Wen. Ma got the job done against the 35-year-old Cebuano by scoring a technical knockout at 2:37 of the third round after Yabo accidentally slipped on the mat when he was trying to deliver a spinning back kick.

Under duress from an aggressive and confident adversary, the 32-year-old Baguio City-based fighter turned to his tactical game plan to break down Pang in the first two rounds of the contest.

Folayang staggered Pang with inside leg kicks and two spinning backfists while waiting for the right timing to launch his whirling back kicks to the head and midsection.

Although wrestling is Pang’s bread-and-butter, Folayang surprised the Australian veteran by taking him down with a hip toss and managed to apply his weight on the mat for a sturdy side control.

“Landslide” was in cruise control when he was comfortably delivering his high kicks and looping right hands, but Pang remained unruffled as he opened his arms and invited Folayang to throw more strikes.

Even though Folayang marvelously dropped Pang to the canvas with a sneak-but-solid right straight at the start of the third and final period, the Aussie found his groove, transitioning to top position before pummeling his Filipino foe with slashing elbows.

In the dying seconds of the third round, Folayang attempted to fasten a Kimura lock and briefly latched on a guillotine choke after going for a sweep to switch positions.

With the impressive triumph over Pang, Folayang improves his professional record to 16-5 and earns a future date with Shinya Aoki for his ONE Championship lightweight belt.

Meanwhile, Pang snaps his 3-fight winning streak and downgrades his prizefighting slate to 22-9-2.

It was not a walk in the park for Banario as he barely squeezed himself through an eye of needle against Ng, who came out in the opening salvo swinging his punches and looking to situate the 3-round affair on the grroud.

Ng also utilized his extensive grappling pedigree and converted 3 of his 5 takedown attempts, but Banario did not back down as he flaunted his wrestling arsenal.

Banario toyed Ng with his strong top control and a slick takedown defense, but he managed to demonstrate his Wushu Sanshou background in the third round by wobbling his opponent with a knee and follow-up right straight.

With the close win over Ng, Banario improves his professional record to 10-5 and is now riding high on a two-fight winning streak.

On the other hand, Ng loses his third-straight fight inside the ONE Championship cage and downgrades to a 7-4 slate.

Proving that Team Lakay fighters are not isolated in the striking department, the 20-year-old Baguio City native effortlessly took Kongsrichai down to the mat and fastened a rear-naked choke to force his Thai foe to tap at the 4:37 mark of the first round.

In addition, Pacio captured his fifth submission victory, complementing his 3 knockout triumphs in his record.

Team Lakay head coach Mark Sangiao spoke highly of Pacio and stressed that he could be the next big thing in the Philippine MMA scene.

“I honestly believe that Joshua could be the next big star of Philippine MMA. He has that potential. But of course, he should maintain his current work ethic to get into that position,” Sangiao told Rappler.

Meanwhile, Kongsrichai snaps his 3-bout victory parade and downgrades to a win-loss slate of 4-3.

Yabo and Ma men exchanged feverishly in the first two rounds as Yabo was consistently throwing his front kicks while attempting to sneak in his signature counter right.

However, Ma was unfazed by his opponent’s striking arsenal as he opted to stand in front of him and traded leather with the Pinoy journeyman.

The 19-year-old Chinese rocked Yabo with his solid right cross on numerous occasions, forcing the latter to maintain the distance as his adversary kept on pushing the pace.

One mistake took a toll on Yabo when he inadvertently fell to the canvas after a failed spinning back kick.

Ma quickly followed Yabo to the ground and secured a full mount to allow him to rain down heavy elbows and punches, compelling referee Olivier Coste to step in and wave it off.

Ma improves his professional record to 3-2 with the win over Yabo, who falls to a 5-4 slate and loses his second-straight outing inside the ONE Championship cage. – Rappler.com