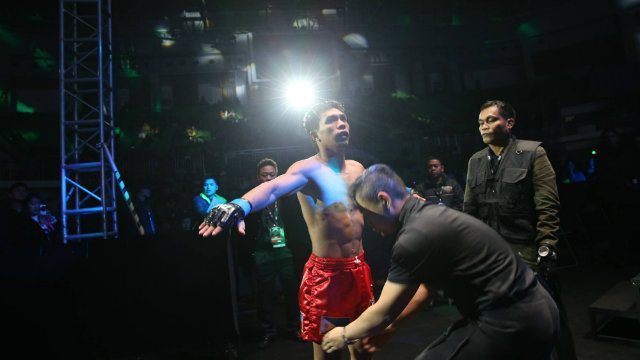 YANGON, Myanmar (UPDATED) – After suffering a painful setback to ONE Championship bantamweight kingpin Bibiano Fernandes, Filipino fighter Kevin Belingon has brought back the shimmer in his prizefighting career by notching his first win in nearly two years at the expense of Tajik standout Muin Gafurov.

The 28-year-old Baguio City native defeated Gafurov via unanimous decision on the undercard of ONE Championship’s “State of Warriors” card on Friday, October 7 at the Thuwanna Indoor Stadium in Yangon, Myanmar.

Belingon, a Wushu Sanshou practitioner, took a different approach in breaking down Gafurov as he patiently banked on his lashing leg kicks and takedown defense.

From bell to bell, Belingon kept Gafurov at bay by punishing his opponent’s lead leg with crisp leg kicks that allowed him to get angles to deliver his hard blows.

As Belingon threw a variety of thunderous foot-strikes from leg kicks to spinning back kicks, Gafurov’s frustration took over him and desperately shot for takedowns.

Gafurov only converted one of his 6 takedown attempts as Belingon proficiently sprawled out of them with ease and prevented the fight from being competed in his Tajik foe’s comfort zone.

Belingon continued to dictate the pace of the bout in the third and final frame, where he maintained his distance by consistently telegraphing his leg kicks while making Gafurov hesitate to come in and cut the gap with his signature left hook.

With the lopsided victory over Gafurov, Belingon places himself back on the winning track for the first time since December 2014 and improves to a 14-6 professional record.

On the other hand, Gafurov downgrades his mixed martial arts standing to 10-2 and tastes his first losing streak. – Rappler.com