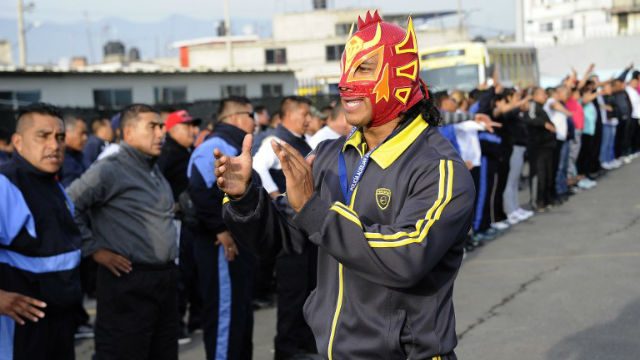 MEXICO CITY, Mexico – Wearing colorful masks, two pro wrestlers show off their moves to a crowd, but this time it’s not in an arena: They’re teaching Mexico City police officers how to subdue villains.

“How are you doing?” Dragon Rojo Jr, wearing a red mask with yellow horns and a crest, shouts at the 190 men and women at the courtyard of a police station in Iztapalapa, a crime-plagued borough of the mega-capital.

“Good!” the officers reply in chorus before the ring gladiators lead them through a series of stretches, push-ups, squats and situps, making many sweat and pant heavily (while some take a break).

After warming up, Dragon Rojo (Red Dragon) and his fellow “Lucha Libre” star Polvora, whose ring name means Gunpowder in English, demonstrate one of their moves.

The burly Polvora lunges forward with a stabbing motion, but Red Dragon grabs his assailant’s arm, twists it, pins him down and places a knee on his chest to immobilize him.

The “Lock 4” submission was among the clutches, holds and other moves that the pro wrestlers presented to the officers, who then practiced the move against each other on the concrete.

But snatching suspects is not the only benefit to this intense training.

“We are proud to change an image of the Mexican police that is not very good: Fat, short, unfit,” said Polvora, who grew up in Iztapalapa.

“We are trying to make a contribution to change this image,” he said through a mask decorated with golden and red flames.

The wrestlers come twice a week to train the officers in the densely populated borough, where murders are up this year with 150 people killed so far.

“You go into your patrol car and the truth is that your get rusty,” said officer Joel Garcia, who admitted that a suspect got away from him once.

“With this you get more active, you start running, feeling better, lighter and healthier,” he said as he worked out following a 24-hour shift.

Garcia grew up admiring Lucha Libre legends such as El Santo, Blue Demon and El Matematico. Now he was trying to imitate his idols.

With the deliberate motion of a rookie wrestler, Garcia crossed his arms and raised them to block his smiling colleague from fake-stabbing him in the head.

Captain Alfredo Alvarez, a former marine, had the idea of bringing luchadores to train officers after he took over as the police station’s coordinator 3 months ago and realized that his colleagues were “somewhat sedentary.”

The station commander, Israel Rodriguez, told him he knew Dragon Rojo Jr and Polvora because they were both from Iztapalapa.

“All the special police forces in the world have their specialty: Russia has sambo, Brazil has capoeira, China has kung-fu, Japan has karate. In Mexico, our martial art is lucha,” Alvarez said.

The wrestlers agreed to provide free lessons to some 380 officers every week out of “friendship and commitment” to their borough, Alvarez said.

The officers are learning how to subdue suspects without resorting to truncheons or pepper spray, which they do not carry.

“We needed this type of training because we always get military-like training, marching, which doesn’t work,” said officer Alejandra Alvarez, 27, who has intervened in cases of with domestic violence and drug addiction.

Dragon Rojo – who is a “rudo,” or bad guy, in the wrestling circuit – said the agents are motivated because “they see the luchador as a superhero and it brings out their inner child.”

The wrestling moves are “100 percent applicable” in police work, said the middleweight champion of the CMLL pro wrestling circuit.

“We’re not teaching ‘backbreakers’ or ‘flying kicks.’ We are teaching techniques to control and physically subdue while being careful about the physical integrity” of the officer and the suspect, he said. – Rappler.com