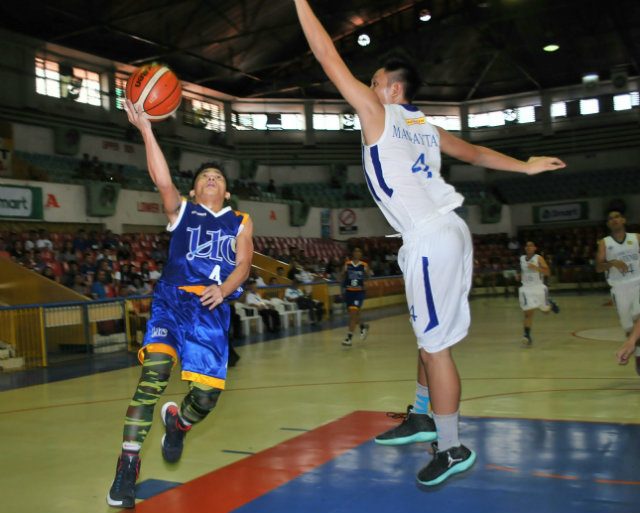 CEBU CITY, Philippines – The University of Cebu (UC) Junior Webmasters and the University of the Visayas (UV) Baby Lancers earned wins at the start of the semifinal round of the CESAFI High School basketball competition Saturday, October 8 at the New Cebu Coliseum, downtown this city.

The UC Junior Webmasters seemed to have the number of the defending champion Sacred Heart School-Ateneo de Cebu (SHS-AdC) Magis Eagles as they now have beaten the latter twice in this season, 73-68. They are also the only team to have so far defeated the Magis Eagles since last season.

The UV Baby Lancers, on the other hand, came alive in the final 6 minutes of the ballgame to avoid an upset against the Cebu Eastern College (CEC) Dragons, 70-65.

The 4-feet-11 tall Gelmart Umpad once again showed why he has the biggest heart on the court as he once again defied his height and finished with a career high 30 points to lead the UC Junior Webmasters. Umpad sank 5 out of 6 in 3-point field goals and finished with a total of 10 of 17 in field goals. He was also effective in other departments of the game by pulling down 3 boards and wrapping up his performance with 5 assists, two steals and one block.

The Magis Eagles, on the other hand, had Jed Cedrick Colonia finishing with 16 points, 8 rebounds and 2 assists.

Jhiey Paraldo led the Baby Lancers with 14 points, 4 rebounds, one assist and one steal but it was Beirn Anthony Laurente who became the Best Player as it was his rainbow shot that sealed the win for UV. Laurente finished with 13 points, 5 rebounds, two assists and one steal.

The Junior Webmasters successfully contained the Magis Eagles by not allowing them to shoot from beyond the arc. They came determined and had a tight grip of the ballgame by leading it all the way except for scoring the starting ball and a few minutes in the third quarter wherein a lay-up from Eroll Pastor allowed the Magis Eagles to take a 1-point lead, 39-38, at the 5:52 mark of the third quarter.

Umpad wrestled the lead back to UC, 45-39, by singlehandedly going on a 7-0 nothing run which included a trey.

With 30 seconds remaining in the ballgame, the Magis Eagles came as close as 3 points on the basket of Pastor, 68-71, but Umpad came to UC’s rescue for the nth time by converting his two charities when he was fouled by Colonia to put a 5-point gap between the two teams and eventually sealing the win for UC.

After the game deadlocked at 50-all with 6 minutes remaining in the ballgame, the Baby Lancers took over the game for good on a 9-0 run kicked off by Laurente’s trey and followed by 6-straight points from Joshua Yerro.

The Dragons came close at 3 points, 63-66, on the triple play of Galarse who picked up a foul from Kenneth Jove Brillo with less than two minutes left in the ballgame.

However, Laurente strikes again with a rainbow shot for a 69-63 pretty much guaranteeing UV the win.

The UC Junior Webmasters will next face the UV Baby Lancers while the SHS-AdC Magis Eagles will go up against CEC Dragons tomorrow.