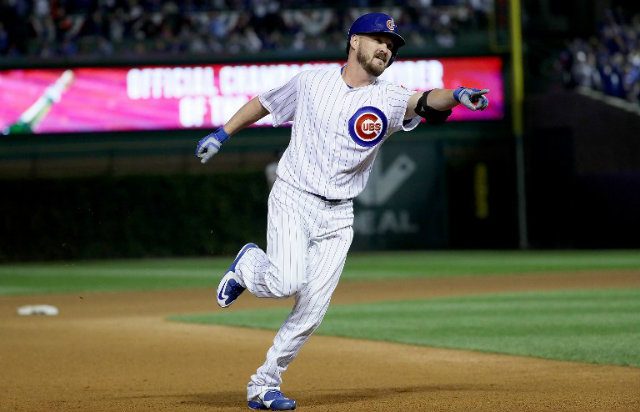 CHICAGO, USA – Pitchers Kyle Hendricks and Travis Wood produced on the mound and at the plate Saturday, October 8 to propel the Chicago Cubs to a 5-2 victory over the San Francisco Giants and a commanding lead in their Major League Baseball playoff series.

The Cubs, in search of their first World Series win in more than a century, lead the best-of-5 National League Division Series 2-0 and will try to book their spot in the NL Championship Series in Game 3 in San Francisco on Monday.

Wood, who took over on the mound after starter Hendricks was hit on the forearm by a line drive off the bat of Angel Pagan in the fourth inning, earned the victory – and also became the first relief pitcher since 1924 to belt a home run in the post-season.

In all the Cubs used six pitchers. Aroldis Chapman retired 3 straight Giants in the ninth, striking out two for his second save in as many games.

“Obviously the bullpen today was unbelievable,” said Hendricks. “They won that game.”

Jason Heyward belted a leadoff double in the second. Javier Baez walked and Willson Contreras lined a base hit to right to load the bases with none out.

Hendricks, a .138 hitter during the regular season, singled to shallow center to score Heyward and Baez.

That gave made it 4-0 for the Cubs, who had put one run on the board in the first inning after Fowler doubled and scored on Ben Zobrist’s two-out single.

Hendricks’ outing ended with two out in the fourth. Afer he was struck, he threw several warm-up pitches before it was decided he should seek treatment on his pitching arm.

“When it first hit me I didn’t really feel it,” he said. “Once I started throwing a little more off the mound it just was tightening up on me.

“X-rays were negative though, so hopefully it’s just a day-to-day thing.”

He was replaced by Wood, who in the bottom of the inning belted his 10th career home run to make it a 5-2 lead.

It was his first homer in post-season play – and just the second ever by a relief pitcher in the playoffs, after that of the New York Giants’ Rosy Ryan in game three of the 1924 World Series.

“(The homer) was a special moment for me,” said Wood, who also struck out two and didn’t allow a hit in his 1 1/3 innings. “But just to be able to pull off the win was huge.”

Wood, a former starter who switched to relief roles, has been relied on by Cubs manager Joe Maddon, with 77 appearances in the regular season.

“He’s been outstanding,” Maddon said. “When he goes out there to play even in the tightest situation, he’s very comfortable with it.

“He takes his batting practice, he looks for those opportunities and then he seized it today.”

The winners of the series will face either the Washington Nationals or Los Angeles Dodgers for a World Series berth.

Sunday’s scheduled Nationals-Dodgers game in Washington was rained out.

MLB commissioner Rob Manfred said the game would be played on Sunday at Nationals Park, where the Dodgers won game one on Friday to take a 1-0 lead in the best-of-five NL Division Series.

The teams will travel after the contest and play Game 3 as scheduled on Monday in Los Angeles. – Rappler.com