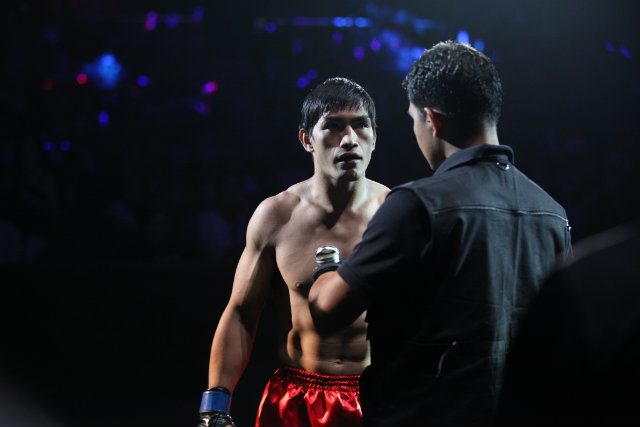 Team Lakay has been widely associated with the Philippine MMA scene due to the number of homegrown talents it has produced since its inception in 2003. It has, however, lost 7 world title contests since 2013.

Honorio Banario relinquished the ONE Championship featherweight belt to Koji Oishi via second-round knockout in May 2013.

The 27-year-old native of Mankayan, Benguet had the chance to redeem the gold-plated strap 7 months later, but he suffered the same fate at the hands of Oishi.

Like Banario, Crisanto Pitpitunge had a heartbreaking 2013, dropping the Pacific Xtreme Combat (PXC) bantamweight championship to Michinori Tanaka by way of unanimous decision in May.

In the following year, Geje Eustaquio climbed to the summit of his division in order to compete for the inaugural ONE Championship flyweight title, but he bowed to Adriano Moraes by second-round submission in September 2014.

2016 has already been an outstanding year for Team Lakay in non-title bouts as the fighters in bright red trunks collectively accomplished a 16-fight winning streak, but it did not translate in the team’s major championship matches.

Two Team Lakay representatives were given title shots in January, but both men failed to bring home at least one MMA world championship belt to their headquarters in the mountains of La Trinidad, Benguet.

Pacio tried to break Team Lakay’s championship losing streak as he faced Naito at ONE Championship’s “State of Warriors” event last Friday, October 7, but he fell short in his bid to give the highly-revered MMA group its first title win in over 3 years.

Naito had to endure two grueling rounds before he pulled off a come-from-behind victory by submitting Pacio with a rear-naked choke in the third round to keep the ONE Championship strawweight belt around his waist.

With Team Lakay losing its first 3 title opportunities in 2016, Eduard Folayang stands to be the only hope to put the Igorot MMA camp’s championship drought to an end.

Folayang is set to challenge Shinya Aoki for the ONE Championship lightweight title in the main event of the “Defending Honor” card, which takes place at the 12,000-capacity Singapore Indoor Stadium in Singapore on November 11.

The 32-year-old Baguio City native has a tall order in front of him as Aoki has been widely regarded as the most dominant lightweight in Asia for the better part of the last decade.

Aoki had 46 professional matches and strutted his wares in various MMA leagues such as ONE Championship, DREAM, Bellator, Strikeforce, and Shooto.

Being a champion is also synonymous to the 33-year-old Japanese’s name as he has a long list of accolades in both MMA and submission wrestling.

Folayang appears to have his hands full against Aoki, but Team Lakay coach Mark Sangiao expects him to be even more motivated.

“Eduard is a hard worker. He always gives his 100% and exerts tremendous effort in training. The motivation to win is always there. He will be more motivated, especially with what happened in Joshua’s title fight,” Sangiao told Rappler.

Although he had a rollercoaster ride in his illustrious 9-year prizefighting career, there was no denying Folayang of a date with Aoki after he outclassed Tetsuya Yamada in 3 rounds last January and then survived an arduous encounter with Australia’s Adrian Pang in August.

As seen in his last two ONE Championship outings, Folayang managed to reinvent himself by transitioning from a pure striker to an all-around MMA competitor.

“Even though Eduard is a veteran of the sport, he is open to changes. He is willing to adapt in order to improve and cope with the evolving aspects of MMA. That’s why even after nearly a decade, Eduard is still at his peak,” said Sangiao.

Despite the seemingly insurmountable odds, Sangiao chooses to look at the bright side of Folayang’s underdog status. He is optimistic that Team Lakay will be celebrating with an MMA world championship belt in November.

“Team Lakay went through many ups and downs, but we’re still here. Bad times helped us to grow and improve, while our wins kept us humble. Joshua might have lost his title fight, but we’re still in high spirits. I hope in November we can get that belt. Nothing is impossible.” – Rappler.com