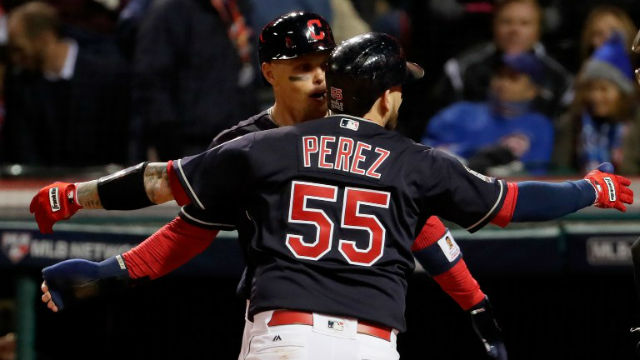 CLEVELAND, USA – While the Chicago Cubs returned to the World Series on Tuesday, October 25 (Wednesday morning, Manila time) after a 71-year wait, the Cleveland Indians made sure they would wait even longer for a Series victory.

Cleveland’s Roberto Perez smashed two home runs and pitcher Corey Kluber struck out 9 batters over 6 shutout innings to spark the Indians over Chicago 6-0 in the opening game of the 112th World Series.

“I don’t think I’ve ever had a night like that. It was huge,” Perez said. “For me it means a lot. I’ve come a long ways. I’m playing with confidence right now.”

The Cubs own America’s longest sports championship drought, having not won the Major League Baseball crown since 1908, while the Indians have the second-longest futility streak in the major leagues, having last taken the title in 1948.

The best-of-7 showdown that will end one team’s misery continues Wednesday at Cleveland before the scene shifts to Chicago’s iconic 102-year-old Wrigley Field.

Major League Baseball advanced Wednesday’s start by one hour to 7 p.m. (2300 GMT) due to forecasts of heavy rain by late evening.

The Indians managed the first shutout in a World Series opener since 1990. Game-one winners have gone on to capture the World Series in 17 of the past 19 years.

“You have that extra level of intensity and focus,” Kluber said. “I’m really just trying to treat it like any other start. Obviously there’s more riding on each game.”

The Cubs, who led the major leagues with 103 regular-seasson victories, lost in their first World Series appearance since 1945, a 25,948-day gap, before 38,091 spectators.

“I’m not disappointed by any means except for the fact we did not win,” Cubs manager Joe Maddon said. “We actually did better than that all looked.

“The quality of at-bats were not that bad. I have no concerns. We were ready to play. Our guys looked really good. We’re fine.”

Perez, making his World Series debut, blasted a 3-run homer off Cubs reliever Hector Rondon in the eighth inning after a solo round-tripper off the metal railing atop the left-field wall in the fourth inning.

“I was just trying to control my emotions,” he said. “To make something happen, it’s an unbelievable feeling.”

Kluber, now with 12 consecutive triumphs when the Tribe score at least two runs, struck out 8 of the first 11 batters he faced, baffling Cubs hitters by painting the inside edges of the strike zone.

“He had good late movement on his fastball and breaking ball,” Indians manager Terry Francona said.

The 30-year-old right-hander, an 18-game winner this season, set a World Series record for most strikeouts over the first 3 innings.

“Kluber was outstanding,” Maddon said. “He gets such great movement both directions with his cutter and comebacker. He was hitting his edges. He pitched well. You’ve got to give him a lot of credit.”

Cubs left-handed pitcher Jon Lester, who had lost only once since June 3, allowed only one run in taking 3 prior World Series starts but stumbled early.

Lester then hit Cleveland batter Brandon Guyer with a pitch with the bases loaded to force home another Indians run.

Kluber was removed in the seventh but Indians reliever Andrew Miller shut down Cubs rally bids in the seventh and eighth innings, striking out Addison Russell and Ross to end the seventh and Kyle Schwarber to escape the eighth, stretching his streak of scoreless playoff relief innings to 13 2/3.

Schwarber, out since April with a knee injury, became the first non-pitcher to make his first hit of a season in the World Series. – Rappler.com