Oct 28, 2016 6:00 PM PHT
Agence France-Presse
Facebook Twitter Copy URL
Copied
Blake Griffin and Chris Paul both score 27 points to send a message to the team that eliminated them in the playoffs last year 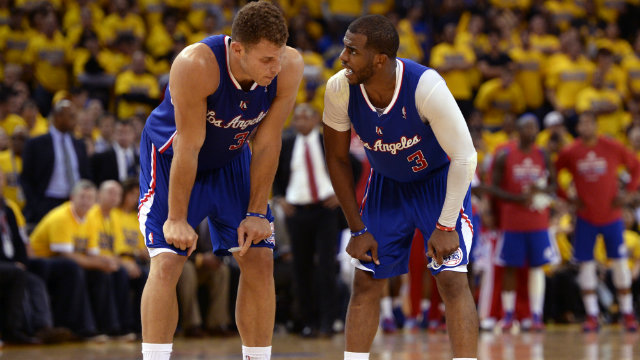 LOS ANGELES, USA – The Los Angeles Clippers opened the season with 114-106 win over Portland on Thursday, October 27 (Friday Manila time), wasting no time getting back into the trenches with the team that knocked them out of the playoffs.

Blake Griffin and Chris Paul each scored 27 points in the Clippers’ regular season debut at the Moda Center arena in Portland, Oregon.

Tempers flared often in an emotional and physical battle that included a number of hard fouls. Portland was whistled for 34 fouls and the Clippers attempted 46 free throws.

The game came just 24 weeks after the Trail Blazers eliminated the Clippers in Game 6 of the first round of the NBA playoffs.

“You can let somebody come in and punk you, or you can do something about it. We stood up to it,” Blazers Damian Lillard said.

Said Portland coach Terry Stotts, “That type of familiarity brings out a rivalry.”

Griffin, who also grabbed 13 rebounds, was a favorite target of the Trail Blazers’ aggression.

“Enough is a enough,” said Paul, who finished with 5 rebounds and 5 assists. “You got to treat every game like it is a rivalry.”

The Clippers are on the short list of contenders to make it to the NBA finals this season.

“Everything was all about togetherness. There is not going to be one guy that does it every night,” he said.

He said they can’t afford to take any nights off in the long season.

“There is an urgency whenever we step on the court,” he said. “It is not about the end of the season, or next year, it is about right now.

“We got to come to play hoops every night no matter who it is.”

Griffin collected 16 points and six rebounds as the Clippers took a 58-49 lead into the intermission. Paul had 12 points and Marreese Speights 11 while Portland got 12 each from Lillard and Moe Harkless in the first half.

Lillard finished with 29 points and 10 rebounds. Harkless tallied a total of 23 points to go with 8 rebounds and Mason Plumlee contributed 17 points, 8 rebounds and 4 assists for the Blazers.

In Sacramento, Kawhi Leonard scored 30 points as the San Antonio Spurs used a second-half blitz to beat the Kings 102-94.

San Antonio earned a seventh consecutive victory against Sacramento thanks to Leonard, who is coming into his own as a superstar in the league. He stole the ball three times over four Kings possessions, turning one of them into his own layup, another into two free throws, and the third into a layup for teammate Dewayne Dedmon.

DeMarcus Cousins scored 37 points and grabbed 16 rebounds for Sacramento, which was denied its first 2-0 start since 2003. Rudy Gay added 17 points for the Kings.

In Atlanta, Paul Millsap scored 28 points to lead the Atlanta Hawks to a 114-99 season-opening victory over the Washington Wizards.

Millsap was 11 for 20 from the field, including 3, 3-pointers, with 7 rebounds and 6 assists to help Atlanta end a 4-year streak of opening-night losses.

He also sparked a 24-6 run and his 3-pointer with 8:09 remaining gave the Hawks a 10-point margin it never surrendered.

Tim Hardaway was also instrumental in the game-clinching run. He had 10 points during the streak en route to scoring 21 points off the bench.

Atlanta’s biggest offseason signee Dwight Howard finished with 11 points. Howard, who has bounced around the league after playing his first eight seasons in Orlando, also had a team-high 19 rebounds.  – Rappler.com