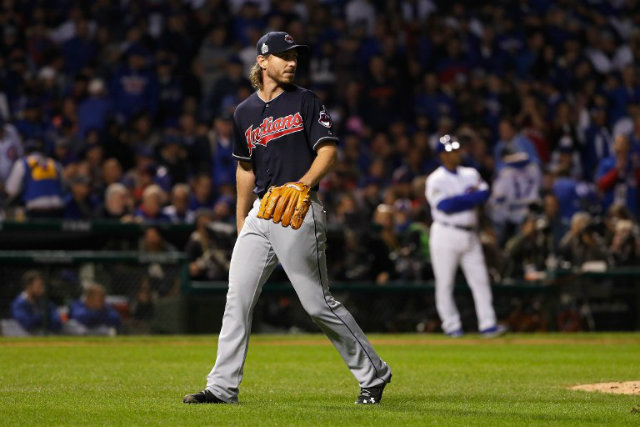 The Indians lead the Chicago Cubs 3-2 in the best-of-7 World Series with game 6 Tuesday in Cleveland, where a seventh game if needed would be played on Wednesday.

No major Cleveland sports team had won a crown since the 1964 NFL Browns until LeBron James led the Cavaliers over Golden State in the NBA Finals. People jammed city streets to glimpse the victory parade.

Now the city could have another one just over 4 months later.

“The support the city has given us all year long has been huge. So it would be an honor for us to be able to have another parade and to see that support that the Cavs got as well. But our main focus right now is to try to win this thing so we can have a parade.”

“A lot of guys have been here a long time and never got to experience anything like this,” Tomlin said. “It’s something that we’re humbled to be able to do.

“We understand it’s not just about getting here. It’s about trying to win as well. There’s nobody in that clubhouse that’s complacent. It’s not like we have a 3-2 lead, it’s just going to happen. That’s not the mindset we take at all.”

They know better. After all, the Cavaliers were down 3-1 before rallying to win the last 3 games of the NBA Finals, an unprecedented feat. In the World Series, 6 teams of 46 that had the chance have won the crown by taking the last 3 games.

“We’re here for a reason, and we understand that,” Tomlin said. “We’re good. We don’t have to do anything more than what we’ve been doing and it should be good enough.”

Fan support has not translated into huge resale ticket prices like those in Chicago, where $20,000 ticket purchases were made.

That doesn’t mean people are not into the Indians. Fans filled their home stadium to watch telecasts of Indians games in Chicago.

And a huge celebration last Tuesday greeted both Cleveland teams as the Tribe played the first World Series opener ever seen in the city at the same time the Cavaliers raised a championship banner before their home opener, a party reminding people of the June parade that Indians manager Terry Francona watched from the upper deck of the stadium.

“It was wonderful for the city. It was hard not to get caught up in it,” he said. “From that vantage point, I think they were expecting 700,000 and I think they about doubled it. And from up in the upper deck you could see the people coming across the bridge in droves.”

“Also you saw how the Cavs reacted. There was sheer joy, but the way the Cavs handled it – they were so outgoing with the fans – it was really cool.

“It’s hard for me to understand how people get so caught up in baseball sometimes, except that when it’s another sport, I get that way.” – Jim Slater, Agence France-Presse/Rappler.com