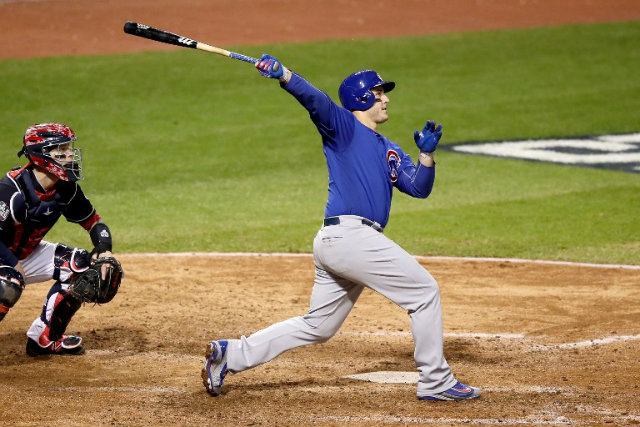 CLEVELAND, USA – A long-suffering Chicago Cubs team charged to the brink of its first World Series title since 1908 by routing Cleveland 9-3 Tuesday, November 1 (Wednesday in Manila), forcing a winner-take-all showdown Wednesday (Thursday in Manila) for the crown.

That sets the stage for a decider at Cleveland between teams whose supporters have endured epic title waits, more than a century in Chicago’s case, but only one club can claim the throne in game 7.

The Cubs, who last played in the World Series in 1945, own America’s longest sports title drought while the Indians have baseball’s second-longest futility streak, last hoisting the trophy in 1948.

Russell, hitting only .211 (4-for-19) in the Series after game 5, smashed a 4-run blast in the third inning, the first World Series grand slam since 2005. Along with his two-run double in the first, he matched the one-game Series record for runs batted in with 6, done 4 times, most recently in 2011.

With another masterful pitching effort by game-two winner Jake Arrieta, who struck out 9 while allowing only two runs on 3 hits, Chicago led comfortably from the start before a sellout crowd of 38,116.

The Cubs, who lost their past 7 World Series appearances, are trying to become only the seventh team in World Series history to recover from a 3-1 deficit to capture the title, most recently done by the 1985 Kansas City Royals. Not since 1979 has a team done it by taking the last two games on the road as the Cubs seek to do.

Cleveland major sports teams had not won a title since the 1964 NFL Browns until LeBron James led the Cavaliers to the NBA championship last June. James arrived in the fourth inning after a victory for the 4-0 Cavs at the arena next door but could not change the Indians’ fortunes.

Despite two missed opportunities to claim the throne, the Indians still could give the city two crowns in just over 4 months and match an NBA-MLB title double achieved only by Los Angeles teams in 1988 and 2002.

Indians right-hander Josh Tomlin, who went 4 2/3 scoreless innings against the Cubs in game 3, was one strike from ending the first inning before surrendering 3 runs on 4 hits.

Kris Bryant smacked a solo homer into the leftfield stands, Anthony Rizzo and Ben Zobrist followed with singles and both scored on Russell’s double to give the Cubs a 3-0 lead. Tribe outfielders Tyler Naquin and Lonnie Chisenhall let the ball drop between them on Russell’s hit.

In the third inning, Kyle Schwarber walked, advanced on singles by Rizzo and Zobrist and, after Cleveland pulled Tomlin for relief pitcher Dan Otero, Russell blasted the ball 434 feet over the left-field wall for a 7-0 Cubs lead.

Russell, 22, became the second-youngest player to hit a Series grand slam after Mickey Mantle at age 21 in 1953.

Cubs right-hander Arrieta, an 18-game winner this season, had tossed 5 1/3 no-hit innings in game two – the deepest no-hit bid in a World Series game since 1969. He settled for 3 hitless innings Tuesday.

Cleveland’s Jason Kipris doubled to open the fourth, the first hit off Arrieta, and scored the Indians’ first run on a Mike Napoli single. Arrieta then hit Chisenhall and walked Coco Crisp to load the bases but struck out Naquin to end the inning.

Kipris added a solo homer in the fifth to pull the Indians within 7-2 and Cleveland had two base runners in the seventh inning but Cubs ace reliever Aroldis Chapman entered and retired Francisco Lindor to end the threat.

In the ninth, Rizzo belted a two-run homer into the rightfield stands for Chicago’s final runs and Roberto Perez answered with a run-scoring single for the Indians. – Jim Slater, Agence France-Presse/Rappler.com