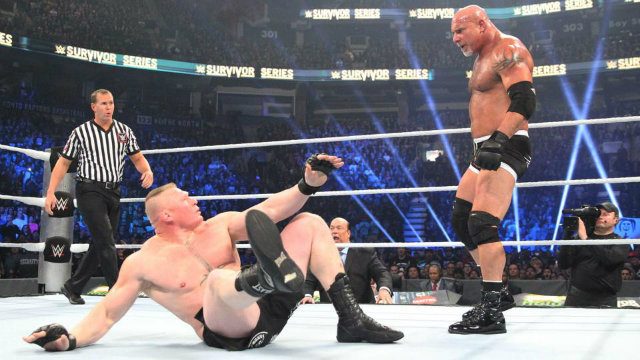 No, this isn’t a live-tweeting of a Bill Goldberg match from 1998, when he inflated his unbeaten streak on the pinned shoulders of Disco Inferno and Buff Bagwell. This was Goldberg’s match at Survivor Series, and his opponent was Brock Lesnar.

Yes, the same Lesnar who broke the Undertaker’s WrestleMania streak, who squashed John Cena and was a former UFC heavyweight champ.

Instead of a classic brawl for the rematch of their disappointing WWE curtain calls at WrestleMania 20 12 years ago, WWE creative went for the shock and awe finish, with Goldberg getting the pin in under two minutes. The event happened Saturday, November 20 (Sunday Manila time) at the Air Canada Centre in Toronto, Canada, the country which Lesnar now calls home.

A SPEAR BY @GOLDBERG has the #BeastIncarnate reeling!! #SurvivorSeries #WWE2K17 pic.twitter.com/AYkU1DHg9d

They were hoping for a water cooler moment; initial social media reactions suggest they got a WTF moment instead.

Could it be WWE’s way of punishing Lesnar for failing a drug test at UFC 200 while boosting WWE2K17 video game sales by putting over the guy on the cover in dominant fashion? Who knows, but RAW is certainly going to be fun tomorrow. – Rappler.com