UAAP Football: Gayoso has his moment as Ateneo’s men seal the deal 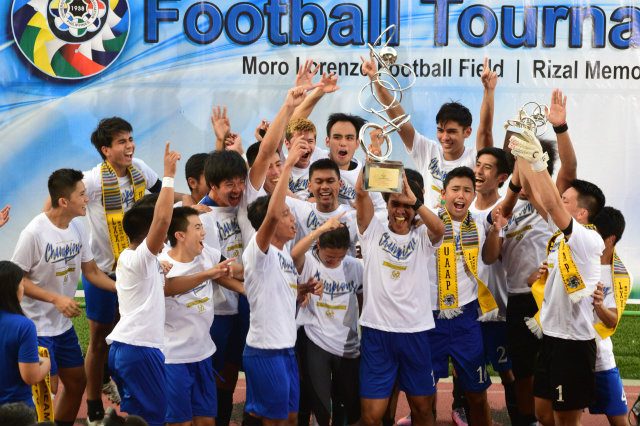 Facebook Twitter Copy URL
Copied
Jarvey Gayoso has his breakout moment in UAAP, while La Salle's return to the championship marks the peak of women's football

On a stirring final day in Season 79 Football, Ateneo defeated FEU to win the men’s title and La Salle’s women ended a 7-year title drough on Sunday, May 7. Here are my observations from the game day.

This is Jarvey Gayoso’s moment. Two hours before kickoff Gayoso could be seen clambering over the fence that separates the Rizal Memorial pitch and the grandstand. He then squeezed through the tiny window of a comfort room and emerged through the main entrance minutes later.

“I really had to go,” explained the striker with a sheepish smile. I guess that necessitated a move that any jewel thief or bank robber would be proud of.

The Ateneo striker showed his larcenous instincts on the field hours later, purloining the only goal of the title match after an error from FEU.

Gayoso is now on 23 goals in his first two seasons of UAAP ball. He has the size, the speed, and finishing to become the next Pinoy homegrown footballing star if he continues developing. In my opinion it is important that the Azkals feature another homegrown offensive weapon like Chieffy Caligdong in order to appeal even more to Filipino fans.

Right now he is the best young player we have, including overseas-born Filipinos, and his form bodes well for the SEA Games. Gayoso intends to take a leave of absence in the first semester of the next school year just to focus on that.

We all knew that he is a special player, but this title burnishes his reputation as a big-game performer.

The 3-5-2 formation of Jaypee Merida worked. It was a risky move to go with a three-man backline instead of the usual 4. The spanner was well and truly thrown into the works very early in the season when veteran Carlo Liay, who was supposed to be deployed at center back, went down injured.

But Merida stuck to his guns and remained with the unorthodox system, using Jay-ra Rocha as the most central of the center backs with William Grierson to his right and Joseph Poe to his left. It worked beautifully, as Ateneo allowed only 8 goals in the entire season, one in the playoffs. Grierson and Rocha, who look like they walked out of Ateneo’s Team B hoops team and on to the pitch, maintained aerial superiority all throughout the season in front of goalie AJ Arcilla. Liay was eventually pushed upfield. He finished his career on Sunday as he started his, a champion. The key to a 3-5-2 is having wide players who can shuttle back and forth from defense to offense. Jordan Jarvis fit the bill perfectly as the wide man among the 5 mids as the team snaps from a 3-5-2 on offense to a 5-3-2 on defense.

True, he did have some awfully nice toys to play with, but Merida deserves plenty of credit and is now a two-time champion coach.

The circumstances and weather made for a ragged final match. The championship game was not really a thing of beauty. The plan originally was to play the semifinals and the final one week apart. That would have given the players plenty of time to rest and also time for the media to drum up buzz for the game. But due to a variety of reasons, including live telecast availability, we went with this sched of having the semis on a Thursday and the final on a Sunday. That gave the players two days of rest, the minimum recommended by FIFA.

The UAAP seems to like having its matches in the afternoon, I guess so students don’t need to stay out late. They also like having a festive championship double header. Understandably they gave the hotter first kickoff at 3:00 pm to the men.

Then the referee of the men’s match failed to give a cooling break in either half. The combination of that, the early kickoff, and the two days of rest meant that both teams were gassed late in the game. FEU needed an equalizer to force extra time but the urgency was not there. You just couldn’t blame the kids either.

I’m hoping that in future seasons teams get a few more days to rest for the final and perhaps the UAAP will allow later kickoffs. Even a one-hour delay to 4:00 pm would be a big boost to help up the standard of the play. Easier said than done, though with all the factors involved.

Women’s football is at its peak. The DLSU Lady Archers ended a 7-year title drought with a 3-1 finals victory over UST. The Lasallians finished the season with a perfect 9-0-0 record.

The match was closer than the score makes it look. UST’s trio of Mary Joy Indac, Charisa Lemoran and Hazel Lustan gave DLSU fits all game long. But strikes by Kyra Dimaandal and Sara Castañeda, plus a late penalty by goalie Inna Palacios won the day.

Previous to this season the best Pinay Football team I had seen was the 2013 FEU squad featuring Barbie Ann Sobredo and Etang Ladero that throttled DLSU in the finals. This batch of players has surpassed that level. The skill from all the players was astonishing, and Castañeda’s strike was the hardest-hit goal I have ever seen a female deliver in the Philippines.

The Pinay game is at its zenith, and DLSU sit on top of the pile with a collection of world-class players that could keep the title in Taft for a few years down the road.

The Aging Rubio snafu was a non-issue in the end. Rubio, the UST women’s coach, created a stir on social media last Thursday. She forced her goalie, Nicole Reyes, to stand away from the goal frame and beside the technical area for a full 12 minutes during their stepladder semifinal against Ateneo. It was punishment for making an error, apparently.

The Ateneans struck twice during that period but UST won 5-4 anyway in one of the most bizarre matches in recent history. Apparently Rubio has done this on at least one occasion previously with a field player.

There is no need to belabor the point of how wrong this is. Surely a 4-5-2 formation with your goalie as a stationary extra right wing is, to say the least, poor football tactics.

Because of the social media maelstrom and all of the attendant negativity surrounding this, one wondered how the UST players would react. But they responded brilliantly.

Before the game they were all smiles and very upbeat. They gave DLSU hell throughout the game, with Lustan serving up a sensational individual goal. After the final whistle they joyously linked arms and gave tribute to their band in the white bleacher section. UST chose to celebrate their silver medal instead of mourning the loss of gold.

Apparently the bad vibes from Thursday had been sorted out by the team internally and they performed with distinction. And as it should be, football won that night. – Rappler.com