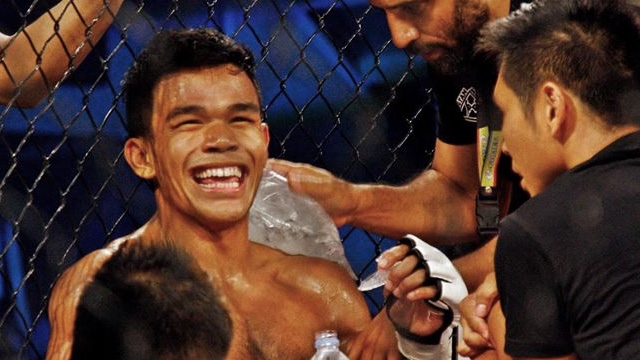 MANILA, Philippines – Fighting in the Ultimate Fighting Championship has been the dream of Rolando Gabriel Dy “since day one.” That dream looks set to come true on June 17 as he’ll step in to fight UFC veteran Alex Caceres on the UFC Fight Night card at Singapore Indoor Stadium in Singapore.

The 25-year-old Dy (8-4-1, 2 knockouts) of Cavite City, Philippines accepted the fight on short notice, posting an Instagram photo of him signing the contract on Thursday, June 1. Even with the fight being two weeks from now, the featherweight fighter says he’s confident he can open eyes – and doors – with the opportunity.

“I know the 100% [version] of me can beat him. I just need to be 100% first,” said the Bansalan, Davao del Sur raised Dy, the son of former boxing champion Rolando Navarette.

Caceres (12-10, 2 KOs) has fought in the UFC since 2011, and is trying to snap a two fight losing streak, having lost to Yair Rodriguez last August by split-decision and tapping out to Jason Knight in the second round this past January by rear-naked choke.

The 28-year-old from Miami in the United States most notably fought Urijah Faber at UFC 175 in 2014, losing by rear-naked choke in three rounds.

Dy has fought most of his career with the Guam-based Pacific Xtreme Combat, and was last in action on April 22, with his fight against Nelson Paes being ruled a no contest due to an accidental head clash. He trains at Team Insider Gym in Makati City, and says the fight will be scheduled for 3, 5-minute rounds in the 145-pound division.

Dy said he still had some medical requirements to fulfill but appeared ecstatic on his Facebook page.

“I really cant believe I am fighting Caceres. I was just watching him fight Faber few years ago. God is truly amazing,” he wrote on his Facebook.

An email to a UFC official was not returned by the time of this story’s publication.

The UFC Singapore card will be headlined by the women’s bantamweight fight between Holly Holm and Bethe Correia. – Rappler.com