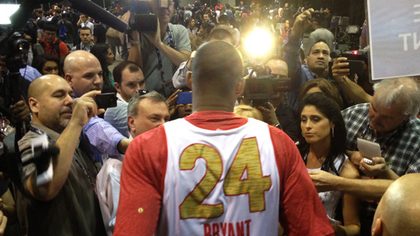 MANILA, Philippines – Kobe Bryant accomplishes another career feat by surpassing Michael Jordan as the all-time leading scorer in an All-Star game as the Western All-Stars defeat the East, to win the 2012 NBA All-Star Game, 152-149.

Bryant scored on a dunk with 4:57 left in the third quarter to officially break Jordan’s record of 262 All-Star game points. The Laker finished with 27 points for the game and with 271 points for his All-Star career.

But it was Kevin Durant of the Oklahoma City Thunder who took home the MVP plum leading the West with 36 points.

Blake Griffin of the Los Angeles Clippers also contributed 22 points for the West but it was his defensive play against LeBron James of the Miami Heat that helped seal the deal for the West.

James had another strong performance leading the East with his own 36 points. His superstar partner in Miami, Dwayne Wade, also played well tallying a triple-double (24 points, 10 rebounds, and 10 assists) to join Michael Jordan and Lebron James as the only players to record a triple-double in an All-Star game.

The West also set an All-Star record after scoring 89 points in the half. The Durant-led team was ready to run away with it until James lead the East to a comeback, cutting down Team West’s lead from 21 to one.

But it wasn’t enough. Griffin picked his pass when they had a chance to tie in the final seconds of the game.

Griffin then hit a freethrow to put the West up by three points with 1.1 seconds to go, but Wade missed what would’ve been the game-tying basket.

In a press conference after the game, James said he felt he let his team down but that overall, it was a great weekend. – Rappler.com